Tonight's Chargers-Raiders pick: This is something rare. A true tossup game. But, for me, it turns on one factor. Visit Week 10 Thursday Gem to find out what that is, and who wins.

Canes basketball loses opener, but it's the crowd that disappoints: Miami opened its 2019-20 men's basketball season last night with an 87-74 home loss to No. 5-ranked Louisville. It wasn't that close. Cardinals led by as many as 32 before a bunch of garbage time Canes points. But the UM team didn't disappoint. Its fans did. For my full column from the arena, please visit Canes Lose Hoops Opener, But It's Fans Who Disappoint. 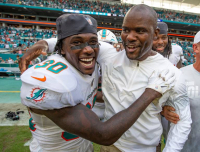 CHILLAX, DOLFANS: MIAMI IN GREAT DRAFT SHAPE DESPITE 'COSTLY' WIN. NEWEST COLUMN: Miami as a sports town can be an easy target for derision, so when we get a weekend the like the one just past, it is worth savoring by a collective fan base that deserves the respite, the feel-good. Hurricanes crush Florida State 27-10 in Tallahassee, running Noles coach Willie Taggert straight outta town. Panthers blank Detroit 4-0 for a first Florida shutout by new goaltender Sergei Bobrovsky. Heat dominate a strong Houston team 129-100 behind a record-setting 46-14 first quarter. And Dolphins turn back bitter-rival New York Jets 26-18 for their first win of the season. It had been more than two years, since Oct. 21-22, 2017, since a Saturday and Sunday delivered wins by all four South Florida teams. The notable difference in those wins? Canes, Panthers and Heat fans are purely happy today. Dolphins fans — at least a good portion of them — are wondering if this will prove to be a win too costly. It is perfectly fitting for the snake-bit Fins: At midseason they finally win a game to shed the specter of 0-16, and half of their fans are wringing hands, caught between pumping fists and wondering, "Oh what have we done?" So let us recalibrate the Race to the 2020 NFL Draft. It is the dubious race for the No. 1 overall pick (worst team wins), but not every team is eyeing a quarterback, a distinction that works in Miami’s strong favor. We size up the five teams best-positioned for No. 1 at midseason in our recent column. To read in full, please visit Enjoy The Win, Miami. Here's Why Fins Still in Great Shape For Top Pick.

Our other most recent work: After Mocking And Tank-Talk, Dolphins And Flores Deserved This Day, from stadium off Sunday's win. Also: NFL Week 9 Gems / Le Batard On Return To Air, Latest Event / Do Not Waver, Dolphins. It Must Be Tua! / and Disgraced Ref Donaghy Opens Up About Game-Fix Scandal.

NFL PIX 'N FANTASY RESULTS: WEEK 9: SOLID, SOLID II, OUCH: NFL picks -- Solid. We went 11-3 overall and 8-5-1 against the spread last week. We'll take both. Especially pleased to nail another Upset of the Week pick ("Aawwk!") with Dolphins beating Jets. ..... LeBatard Show fantasy (18-team PPR) -- Solid II. Greg's Lobos improved to 5-4 with a 89.9 to 63.6 triumph over Papi. All that went right was 36 points from Mike (Money) Evans but that was enough this week. We're tied for sixth place and playoff-hopeful. ..... Friends n' family fantasy (10-team PPR) -- Ouch. Lobos fell to 5-4 with a 128-89 loss to snuff a four-game win streak. Deshaun Watson led us with 19 points, while big producers Saquon Barkley, Dalvin Cook and Stefon Diggs all underperformed. Still in fourth place and looking good for the playoffs. Go 'Bos!

THE LIST: CANES FOOTBALL GAMES AMONG ALL-TIME TOP 150: ESPN named the top 150 college football games of all time as a part of celebrating the sport's 150th anniversary, and Miami turned up 11 times -- including four of the top six. Complete list here. The 11 UM games to make it:

Note: I'm honored to have covered (I think) eight of these 11, including the top four.

Other select recent columns: Heat's Opener Stars Butler As Missing Person, Winslow As Rising Star / Heat 'Tighten the Screws,' And Dion Waiters Is the Lesson, As New Season Begins / Diaz Playing 'Rebuild' Card As Weak as Canes' Effort in Loss to Ga-Tech / LeBron Follows Company Line On China After Career Devoted to Social Justice / Now Or Never For Panthers To Stop Wasting The Barkov Years / Why Is NBA Doing Business With Human Rights-Violating China In First Place? / 'Culture' Isn't Enough. It'll Take These 5 Factors to Lift Miami Heat / Riley Introduces Butler -- 'Cause the Heat Don't Tank / Why Dolphins, Even Epic-Bad, May be Closer to Major Turnaround Than Canes / Turning Its Back on Kaepernick Enters Year 3 As NFL's Ongoing Shame / Worst Miami Team Ever? Epic Losing Already Making Dolphins A National Joke / Quit Whining! Yes Dolphins Are Tanking, And Yes They Should / Dolphins' Ross Cannot Be Surprised By Major Fallout Over Trump Fundraiser / Le Batard on Miami Radio Turmoil: 'We Were Evicted' / Buoniconti: Hall of Famer, But Even Greater Off the Field / It Is Megan Rapinoe's World Cup -- On And Off The Field / An Era Ends As Panthers' Luongo Retires / O.J. Can Tweet What He Wants, But How He's Seen Is Not Up To Him / Ranking Dolphins, Heat, Marlins & Panthers' Best Young Players / Inter Miami Aiming High With Barca's Suarez / End The Illogical Shame and Honor Schnellenberger / Oh To Be Hated Again! Lean Times For Miami Sports / Why Tiger's Masters Triumph Is About More Than Golf / Transgender-Athlete Firestorm A Necessary Debate / Across the Rio Grande to the PGA Tour / From Dark and Empty to Top Of the World: Dan Le Batard at 50.