Updated Herald NFL QB rankings: There's a new No. 1 and a wide-open race for the season crown as we hit the home stretch. For the latest, visit Herald NFL Week 12 QB Rankings.

FIU BEATING CANES WAS HUGE FOR PANTHERS, EVEN BIGGER FOR BUTCH DAVIS. NEW COLUMN: This was in the merry, sonic bedlam of the FIU lockerroom after the biggest win in school history had been minted Saturday night at Marlins Park. Butch Davis choked up Monday in the remembering, the retelling. "The kids were dancing, cheering, high-fiving, chest-bumping," he said 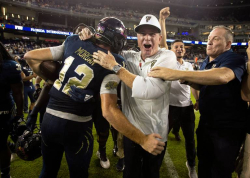 of his Panthers players who had just stunned cross-county rival Miami, 30-24. "When we finally settled down..." Davis’ voice hitched, cracked. It came out closer to a whisper as he resumed. When the boisterous room quieted he looked at his players’ eyes and saw joy, saw pride, saw tears. "When we finally settled down," Davis said, "you looked into those kids’ eyes, their faces, and you saw what they had just accomplished. You saw it, knowing this night was going to stick with them for the rest of their lives." FIU had been 0-31 against Power 5 conference schools in its brief history including 0-3 against Miami before shocking college football as a three-touchdown underdog Saturday. "We had no chance. No chance," he said, of outside perceptions. "[The Hurricanes] would be playing their backups in the second half." Davis (pictured celebrating Saturday) of course coached Miami under Jimmy Johnson in in 1984-84, and was UM head coach in 1995-2000. In the latter stint he won despite inheriting Dennis Erickson’s NCAA sanctions and scholarship reductions. He left for the NFL after an 11-1 season, all but gifting Larry Coker the 2001 national championship with players Davis had drafted. Now, FIU will go to a bowl game each of Davis’ first three seasons, the streak a first for the 18-year-old program. He inherited a lot of losing but turned it around, with Saturday’s triumph a watershed. For Panthers players, this was personal. "Our kids had a chip on their shoulder," as Davis put it. "I don’t think Miami recruited any of our kids, to be honest." It was personal for Davis, too. Very. To read our full latest column, please visit Beating Canes Was Huge For FIU, But Even Bigger For Butch Davis.

Also from me within past week: FIU's Historic, Magical Night A New Low For Canes / Le Batard Explains the Papi Mystery / If Jeter Doesn't Get In With Unanimous Vote -- Don't Blame Me! / and Draft Uncertainty Means Dolphins Need to Hedge Bets. His Name Is Kaepernick.

NFL PIX 'N FANTASY RESULTS: WEEK 12: DECENT, LUCKY, CLINCHED: NFL picks -- Decent. We were 10-4 overall and an even 7-7 against the spread last week. OK with the first will abide the second. Missed our Upset of the Week but hit on another outright upset with Jets beating Oakland. Also had a trio of 'dogs-with-points in Giants, Bengals and Redskins. Had the Dolphins' losing margin exact at 17 points. Missed one cover (Texans) by one point on the wrong side of a half-point line. ..... LeBatard Show fantasy (18-team PPR) -- Lucky! Greg's Lobos improved to 7-5 with a low-scoring, fortunate 67.4 to 46.2 win over Dominique Foxworthy, led by Tyler Boyd's 19.1 points. We did something unheard of: Started a player on a bye wek (Patrick Mahomes), yet survived the blunder. Was rushing to the hospital to see a family friend Sunday morning; still, no excuse. Got lucky. I sit as the 6th of 8 playoff seeds entering the final week, likely needing to close with a win to clinch. ..... Friends n' family fantasy (10-team PPR) -- Clinched! Lobos fell to 7-5 with a 133-92 loss to league's top seed, despite 26 from Allen Robinson and 21 from Jared Cook. Neverthless, have clinched a playoff spot. Stand 3rd of 6 playoff teams entering final week, with final seeding to be determined. Go 'Bos!