1) It's FRIDAY OCTOBER 25. Check out our 'Fins At 50' book at Amazon. 2) In The Previous Blogpost (ITPB): Dolphins fall in Buffalo with DSM poll, Hot Button Top 10 & more. 3) Join us on Twitter.com/gregcote. Also on Facebook and Instagram.

BUTLER DIDN'T SHOW BUT WINSLOW SURE DID AS HEAT OPEN SEASON:  The Miami Heat’s 32nd regular season unwrapped itself strangely Wednesday night in the downtown bayside arena. It was the missing persons who made it weird. Miami icon Dwyane Wade: Retired, not beginning an NBA season for the first time since 2002, a franchise moving on from its most beloved 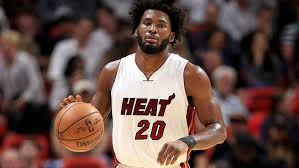 figure. New star and big offseason acquisition Jimmy Butler: Absent, shockingly and mysteriously missing his own grand opening for "personal reasons." Dion Waiters: Suspended, not there because of conduct detrimental to the team, a sign affixed to the nameplate above his empty locker rather incongruously reading, ‘Absolute Respect.’ And James Johnson: Inactive on account of "Conditioning," a kinder way of saying the dude showed up out of shape. Wade we knew would be missing, of course. The other three? Those you sort of hoped might be available for the launch of your season as the Memphis Grizzlies visited. Didn’t matter, it turned out. The night began with Butler’s absence the theme. But it ended with the declaration of Justise Winslow’s full arrival in a 120-101 Heat victory seized on a 24-1 fourth quarter run. The continued ascension of Winslow (pictured), now in his fifth season but still only 23, is seen as a key to this season -- and he left little doubt Wednesday that he’s up to a co-starring role with Butler. Winslow was quite magnificent, with 27 points, 7 rebounds, 7 assists and tenacious defense. He was, palpably, the team leader. He looked like a man introducing himself as a rising star. For my full column from the arena off a strange but ultimately uplifting Heat Opening Night, visit Heat's Opener Stars Butler As Missing Person, Winslow As Rising Star. For our earlier Heat column, visit Heat 'Tighten the Screws,' And Dion Waiters Is the Lesson, As New Season Begins.

Other most recent columns: Diaz Playing 'Rebuild' Card As Weak as Canes' Effort in Loss to Ga-Tech / LeBron Follows Company Line On China After Career Devoted to Social Justice / No Sacrifice Too Great For Tanking-For-Tua Dolphins / and Now Or Never For Panthers To Stop Wasting The Barkov Years.

DOLPHINS-STEELERS, GAME OF THE WEEK, UPSETS: OUR NFL WEEK 8 PICKS: Off our record-setting 2018 season and a solid start to our 29th year of NFL picks in the Miami Herald, here are our latest selections. Will the winless Dolphins cover the huge point spread in Pittsburgh Monday night? Who won honors for Game of the Week? Can we start another Upset of the Week streak? Answers to all of that and more may be found in the motherlode of prognostication that is our NFL Week 8 Gems. We were a bit off last week (8-6 overall, 5-9 vs. the spread), but aim to rebound this time. Our week got off to a split start last night as Vikings beat Redskins, 19-9. Had the win, but misfired on them not covering a 16-point line. Rally time. Let's go!

NFL PIX 'N FANTASY RESULTS: WEEK 7: TOUGH, HEARTBREAK, WIN!: NFL picks -- Tough. Our worst week yet in a solid season saw us manage 8-6 overall and (oy) 5-9 against the spread. Our Upset of the Week streak derailed badly with our Falcons over Rams misfire. We had Dolphins-with-points in Buffalo and Saints to cover at Chicago; otherwise, not much went right. Rally time! ..... LeBatard Show fantasy (18-team PPR) -- Heartbreak. Greg's Lobos fell to 3-4 in the worst way possible, 98.5 to 98, when Roy Bellamy's Jamison Crowder caught a very late, meaningless pass Monday night. We'd surged ahead behind Sony Michel's 22.4 points only to lose by an iota at the end. Now we must navigate the temporary loss of Patrick Mahomes. We're tied for ninth, midpack, but still thinking playoffs with six weeks left. 'Cause Lobos don't quit! ..... Friends n' family fantasy (10-team PPR) -- Win! Lobos are now 4-3 with a third straight win, a 122-106 victory over the league's previously last unbeaten team. The Vikings came through for me, with 28 from Dalvin Cook and 22 from Stefon Diggs. Had four others in the 14-16 points range. (Welcome back, Saquon). We're tied for fourth and thinking playoffs. Go 'Bos!

Previous other select recent columns: Why Is NBA Doing Business With Human Rights-Violating China In First Place? / 'Culture' Isn't Enough. It'll Take These 5 Factors to Lift Miami Heat / Riley Introduces Butler -- 'Cause the Heat Don't Tank / Why Dolphins, Even Epic-Bad, May be Closer to Major Turnaround Than Canes / Turning Its Back on Kaepernick Enters Year 3 As NFL's Ongoing Shame / Worst Miami Team Ever? Epic Losing Already Making Dolphins A National Joke / Quit Whining! Yes Dolphins Are Tanking, And Yes They Should / Dolphins' Ross Cannot Be Surprised By Major Fallout Over Trump Fundraiser / Le Batard on Miami Radio Turmoil: 'We Were Evicted' / Buoniconti: Hall of Famer, But Even Greater Off the Field / It Is Megan Rapinoe's World Cup -- On And Off The Field / An Era Ends As Panthers' Luongo Retires / O.J. Can Tweet What He Wants, But How He's Seen Is Not Up To Him / Ranking Dolphins, Heat, Marlins & Panthers' Best Young Players / Inter Miami Aiming High With Barca's Suarez / End The Illogical Shame and Honor Schnellenberger / Oh To Be Hated Again! Lean Times For Miami Sports / Why Tiger's Masters Triumph Is About More Than Golf / Transgender-Athlete Firestorm A Necessary Debate / Across the Rio Grande to the PGA Tour / From Dark and Empty to Top Of the World: Dan Le Batard at 50.