1) It's THURSDAY OCTOBER 3. Happy new month, all! You tried, September. Except with the Dolphins. 2) Watch for our Herald Week 4 NFL QB Rankings and NFL Pix 'n Fantasy results here later this afternoon. And scroll down to previous blogpost for latest Dolphins postgame poll result. It's surprising. (Or is it?) 3) Check out our 'Fins At 50' book at Amazon. 4) In The Previous Blogpost (ITPB): Dolphins lose to Chargers with DSM poll, Hot Button Top 10, Riley introduces Butler 'cause Heat don't tank, NFL Week 4 pix, Canes/FIU lick wounds & more. 5) Join us on Twitter.com/gregcote. Also on Facebook and Instagram.

Our Dolphins column from Sunday's latest loss: Visit Winless But Progress Is Perfect Combo For Dolphins.

STAR COACH, STAR GOALIE: WILL 2 BIG ADDITIONS BE ENOUGH FOR NHL PANTHERS TO STOP WASTING THE BARKOV YEARS?: It has been something of a running joke in South Florida sports. "This is the Florida Panthers’ year!" Yes, so this feels like about the fifth anniversary of hearing that, right? Every year it’s "but this time we mean it!" And then the NHL season starts and

gradually the hyped-up Cats lose air as inexorably as a helium party balloon. High hopes, ultimate disappointment, rinse, repeat. Nobody is more sick of this treadmill than Dale Tallon, the Panthers’ general manager. "Talk is cheap, so let’s see. Let’s stop talking and start acting," was Tallon’s message to his 2019-20 team. "We’ve got the pieces in place. Everybody is excited. ‘Great summer, great summer.’ Now let’s prove it!" The proving needs to start as fast as a puck leaves a stick for a franchise more accustomed to slow starts. Florida opens its 26th season Thursday night in Tampa Bay and makes its home debut Saturday vs. the same Lightning — owners of the NHL’s best record (by a lot) last season. Tallon’s great summer co-starred the hiring of a new head coach in Joel Quenneville (pictured) and the free agent signing of a new goaltender in Sergei Bobrovsky, a starpower quiniela not to be understated. One is the second-winningest coach in NHL history and a three-time Stanley Cup champion. The other is a five-time all-star and twice has won the Vezina Trophy as hockey’s best goalie. The question: Can the two of them lead the Cats out of their rut and into contention at last? Florida has been wasting the prime of Aleksander Barkov, whom defenseman Keith Yandle calls "one of the best players if not the best player in the world." Time for the Panthers to prove they're ready for a championship run. This is my latest column. To read it in full, please visit Now Or Never For Panthers To Stop Wasting The Barkov Years. 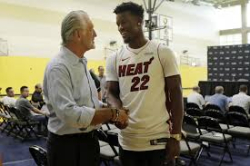 'CULTURE' ISN'T ENOUGH. THESE 5 FACTORS MUST LIFT HEAT BACK TO CONTENTION: The question put to Erik Spoelstra on Monday was general enough for him to dodge it with veteran-coach ease. He did not. Does he think the Miami Heat can contend in the NBA’s Eastern Conference this season? "We do," he answered, quickly. "Unequivocally so." But how? How does a franchise trying to shed its post-Big 3 era malaise of three missed playoffs in the past five years turn it around so dramatically? How does a team starting a season without Dwyane Wade for the first time since 2002 pull off the big reboot? I explore in my newest column, and list five factors that must go right for Miami to be East contenders in the mix for top-four seed. Pictured: Pat Riley after introducing Jimmy Butler at a recent news conference. To read my full recent column and see what those five keys to the upcoming season are, kindly visit 'Culture' Isn't Enough. It'll Take These 5 Factors to Lift Miami Heat.

Other most recent columns: Riley Introduces Butler -- 'Cause the Heat Don't Tank / Dolfans, Here Is Your Escape To The Glory Days / and Why Dolphins, Even Epic-Bad, May be Closer to Major Turnaround Than Canes. Also: Turning Its Back on Kaepernick Enters Year 3 As NFL's Ongoing Shame / Worst Miami Team Ever? Epic Losing Already Making Dolphins A National Joke / Quit Whining! Yes Dolphins Are Tanking, And Yes They Should / and It's Up to Today's Dolphins to Defend Shula's Legacy.

NFL PIX 'N FANTASY RESULTS: WEEK 4: NFL picks--Head above water. We did OK in a tough week, going 9-6 overall and 8-7 against the spread. That included another Upset of the Week bull's-eye ("Aawwk!") with Saints over Cowboys, a second outright upset hit with Jaguars winning in Denver, and a trio of 'dogs-with-points in Bills, Lions and Buccaneers. LeBatard Show fantasy--Don't ask. Greg's Lobos dropped to 2-2, falling to unbeaten Izzy Gutierrez, 120.6-93.2. Rough. Mike Evans led us with 18.9 and Patrick Mahomes turned mortal with 18. Shady McCoy chipped in 16.9 but not much else went right. Friends n' family fantasy--No again! Lobos now 1-3 after an embarrassing 143-85 loss. What am I, the Dolphins!? Four starters in single figures and a leading scorer with only 18 (Dalvin Cook) won't win you many games. The Saquon Barkley curse sets in.

NEW 'BACK IN MY DAY': FAKE BURGERS!: This premiered on today's Le Batard Show on ESPN Radio and ESPNews:

Select other recent columns: Who's Super Bowl-Bound And Where Dolphins Land (NFL Team Rankings) / Luck Deserves Praise For Putting Health, Life Above Football / Hurricanes Have Only Themselves To Blame For Opening Loss / Dolphins' Ross Cannot Be Surprised By Major Fallout Over Trump Fundraiser / Le Batard on Miami Radio Turmoil: 'We Were Evicted' / Buoniconti: Hall of Famer, But Even Greater Off the Field / Wimbledon, Tiger, U.S. Women For Starters. Why 2019 Is Greatest Sports Year Ever / Queens of the World. U.S. Soccer Wins Again / Bold Moves To Get Jimmy Butler Make Heat -- And Pat Riley -- Relevant Again / New-look Panthers: Lots Of Hope, Zero Excuses Left / It Is Megan Rapinoe's World Cup -- On And Off The Field / An Era Ends As Panthers' Luongo Retires / O.J. Can Tweet What He Wants, But How He's Seen Is Not Up To Him / Ranking Dolphins, Heat, Marlins & Panthers' Best Young Players / Inter Miami Aiming High With Barca's Suarez / End The Illogical Shame and Honor Schnellenberger / Oh To Be Hated Again! Lean Times For Miami Sports / Why Tiger's Masters Triumph Is About More Than Golf / Transgender-Athlete Firestorm A Necessary Debate / Across the Rio Grande to the PGA Tour / and From Dark and Empty to Top Of the World: Dan Le Batard at 50.