« Latest Hot Button Top 10 (updated): Dolphins and Canes' camp openings battle for No. 1 and see what else falls where; plus thank you Fort Myers, our latest columns & more | Main | I'm outta here! A special message to our Herald readers, ESPN listeners and social media legion... »

1) It's THURSDAY, AUGUST 1. Farewell July and welcome Augie, when the football games begin! 2) ) It's always the perfect time to check out my 'Fins At 50' book at Amazon. 3) In The Previous Blogpost (ITPB): Hot Button Top 10, thank you Fort Myers & more. 4) Join us on Twitter @gregcote. Also on Facebook and Instagram.

Talking 'Greg Cote Day' on  Le Batard Show: Thank you again Fort Myers! To the minor-league Miracle ballclub and to all of the fans who turned out Saturday night for Greg Cote Day. We were humbled to be honored at such a truly ridiculous event. Loads o' fun!  We discussed on Tuesday's Le Batard Show on ESPN Radio. For that conversation, plus videos from the event, go HERE.

BUONICONTI'S LEGACY: GREAT ON THE FIELD, GREATER OFF IT: Nick Buoniconti, the first big, established star in Miami Dolphins franchise history, has died at age 78 after a life so much bigger than football. Buoniconti passed away Tuesday night in hospice care after a years-long struggle with dementia that his family believes was brought on by chronic traumatic encephalopathy (CTE), the brain injury that can result from football-related trauma. His impact on the field was great, as a Hall of Famer who played a key role as the captain and driving force of the famed "No-Name Defense" in the Dolphins’ historic 1972 Perfect Season and in the repeat Super Bowl championship in 1973. But his impact off the field was even greater. He founded the Miami Project to Cure Paralysis and the Buoniconti Fund after his son, Marc, had been paralyzed while playing college football, helping raise some $500 million for the Miami Project. And, right to the end, his going public about his own dementia raised awareness of CTE and its link to football-related brain trauma. For my full column on the passing of a Dolphins great, kindly visit Buoniconti: Hall of Famer, But Even Greater Off the Field. 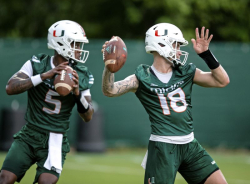 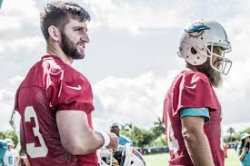 DOLPHINS, CANES STARTING QUARTERBACK BATTLES: AND THE WINNERS ARE...: There is no proverbial-on-the-job "honeymoon" for Manny Diaz or Brian Flores to enjoy. They take over the Miami Hurricanes and Miami Dolphins as rookie head coaches under uncommon pressure — for different reasons, and for one that is the same. Diaz must live up to expectations of the Canes that are very high for a team that went 7-6 last year, and he faces a rugged opener as underdogs to the top-10 Florida Gators on Aug. 24 in Orlando. Flores must disprove expectations of the Dolphins that are gutter-low, and somehow survive a brutal opening-month schedule vs. the Ravens, Patriots, Cowboys and Chargers — every one a 2018 playoff team. But first, each must not mess up the first major on-field decision of his head coaching career, the one you simply have to get right. It is rare for an NFL or major college team to have a truly open quarterback competition carry this deep into summer, into training camp, with games looming. Miami has two of them, with Ryan Fitzpatrick vs. Josh Rosen on the pro side, and N’Kosi Perry vs. Tate Martell vs. Jarren Williams across town in Coral Gables. OK. Those are the bones of my newest column, the intro. To read the full column -- how I think both battles will play out, who'll win the jobs and why -- kindly visit Analyzing QB Battles for Hurricanes, Dolphins, and Why These Players Will Win. Pictured left: UM's Perry (5) and Martell (18). Pictured right: Fins' Rosen (sans helmet) and Fitzpatrick.

Our previous week's columns: How Brian Flores Won Dolphins Players' Respect Before Ever Coaching A Game / Le Batard Headed Back On The Air / Countdown To Hurricanes-Gators On As Practices Begin / and In Tyreek Hill, Goodell And NFL Turn Blind Eye To Domestic Violence.

Other most recent columns: Le Batard Defies Trump, ESPN's No-Politics Policy / The 4 Ways Miami Heat Had A Winning Offseason / What If Everybody's Wrong About The Dolphins? / and Wimbledon, Tiger, U.S. Women For Starters. Why 2019 Is Greatest Sports Year Ever.

Select other columns: Heat And Riley Lose On Westbrook, But Loss Might Still Be  A Win / If You Don't Like Rapinoe, USWNT -- That's On You, Not Them / Coco's Wimbledon Runs Ends, But U.S. Tennis Just Found Its Next Big Thing / Queens of the World. U.S. Soccer Wins Again / U.S. Women Reach World Cup Final -- Not With Arrogance, But Excellence / Bold Moves To Get Jimmy Butler Make Heat -- And Pat Riley -- Relevant Again / New-look Panthers: Lots Of Hope, Zero Excuses Left / It Is Megan Rapinoe's World Cup -- On And Off The Field / Kawhi to Lakers Would Mean More Rings, Last Laugh For LeBron / An Era Ends As Panthers' Luongo Retires / Heat's Haslem Doesn't Need Us Telling Him Whether To Retire / Drip Or Swag, Herro Brings It, And Heat Need It / O.J. Can Tweet What He Wants, But How He's Seen Is Not Up To Him / U.S. Women's Soccer Should Be Celebrated -- No Apologies / Ranking Dolphins, Heat, Marlins & Panthers' Best Young Players / Heat Must Dump Bad Contracts Starting With Whiteside, Dragic /Inter Miami Aiming High With Barca's Suarez / For Marlins, An Encouraging Two Weeks Is Progress / End The Illogical Shame and Honor Schnellenberger / Smart Decision A No-Brainer: Dolphins Should Start Rosen / Dolphins Land Big Prize in Wilkins / Oh To Be Hated Again! Lean Times For Miami Sports / Why Tiger's Masters Triumph Is About More Than Golf / Case For Kaepernick's Comeback As A Dolphin / Transgender-Athlete Firestorm A Necessary Debate / Across the Rio Grande to the PGA Tour / From Dark and Empty to Top Of the World: Dan Le Batard at 50 / And, our Dwyane Wade Farewell Trilogy: The Last Star: Post-Wade, Miami Sports Is Bereft; Wade Fittingly Goes Out A Winner And 30-point Star; and Thank You, Dwyane Wade, Miami's G.O.A.T.