Giving up Tunsil in trade would be huge risk for Dolphins, Flores. Latest column; plus why Clowney could be missing piece for Fins (but not for Tunsil!), Andrew Luck deserves praise for retirement call & more

1) It's SATURDAY, AUGUST 31. Farewell, August, month that brings us football. Thank you for blowing Hurricane Dorian away from South Florida. 2) It's the perfect time to check out my 'Fins At 50' book at Amazon. 3) In The Previous Blogpost (ITPB): Canes fall to Gators with CSM poll result, Hot Button Top 10, why Rosen must start at QB for Dolphins, your Fitzpatrick-Rosen poll verdict & more. 4) Join us on Twitter.com/gregcote. Also on Facebook and Instagram.

Who's Super Bowl-Bound And Where Dolphins Land: Our 2019 NFL Team Rankings.

Diaz's Choice For Hurricanes QB Not Seen In More Than 50 Years: Mining UM history for perspective on a bold decision. 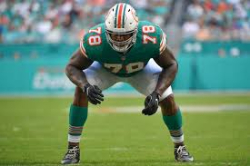 FLORES USED TO TUMULT, BUT DOLPHINS TRADING TUNSIL WOULD BE TOO MUCH: Brian Flores’ introduction to NFL head coaching has included losing a defensive tackle to an amputated arm after a truck accident; abruptly firing his offensive line coach in the middle of training camp; enduring the fallout of the club owner’s fundraiser for Donald Trump; and guiding what is expected to be the worst team in the NFL. Now, as exhibition games cede to the regular season, Flores has made the wrong choice for a starting quarterback and put the mind-set of his locker room at risk amid corrosive speculation about the future of stalwart left tackle Laremy Tunsil. Coaches have had smoother preseasons. The upside: If you believe that stuff about baptism by fire, consider Mr. Flores fully baptized. And now the hard work begins. And the hard decision, too. Choosing Ryan Fitzpatrick over Josh Rosen was easy. Low risk. But choosing whether to include Tunsil in a trade for Texans pass rusher Jadeveon Clowney? High risk. Huge stakes. And Flores’ grip on his team in the balance. The Tunsil/Clowney cloud hovers as everything begins for real, with Tunsil pictured. To read my full most recent column, please visit Tunsil/Clowney Trade Would Be Powderkeg for Dolphins, Flores.

DOLPHINS' GRAND PLAN BECOMING CLEAR. AND CLOWNEY WOULD FIT: A football fan need not dive deep down the rabbit hole of analytics to know the simple truth about any NFL roster. Four positions are paramount. Essential. They are: Quarterback, a fearsome pass rusher, a lockdown cornerback and a premier left tackle. Start with QB and place the others in any order you wish. The Miami Dolphins’ understanding of this at last has come clear. Say this much: After most of 20 years of floundering irrelevance and lurching shifts in personnel and philosophy, the franchise’s current regime at least has a plan. A clue. It is why Miami gave shutdown corner Xavien Howard, who just turned 26, a record five-year, $75.3 million contract extension through 2024. It is why left tackle Laremy Tunsil, who just turned 25, is off the board, untouchable, in terms of trade inquiries, and why his contract (still dirt-cheap on his rookie deal) surely will be extended before he becomes a free agent following the 2020 season. It is why the Dolphins presently are looking hard into a trade for disgruntled Texans pass-rush star Jadeveon Clowney, 26, and more proven-elite than even Howard or Tunsil. And it is why Miami has stocked draft capital in a hell-bent plan to claim its long elusive star quarterback in 2020, buying up into the draft order if needed, ideally to get grand prize Tua Tagovailao of Alabama. To read my entire recent column, with an emphasis on the interest in Clowney (pictured), please visit Clowney Would Be Missing Piece in Dolphins' Emerging Plan.

SAVE THE SCORN. ANDREW LUCK DESERVES PRAISE FOR HIS RETIREMENT CALL: Indianapolis Colts football fans will wish they could take this back, but they cannot. It was too late the 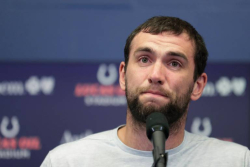 moment it happened. It stained a city in a way that can’t ever quite be scrubbed clean. Only in an age driven by the immediacy of social media could this have happened. It was during Saturday night’s Colts home preseason game. Star quarterback Andrew Luck had planned to announce the next day that he was retiring. That night, not playing, he was on the sideline enjoying himself with teammates for what would be the last time. Then the news broke during the game, and it spread faster than any wildfire. It was trending on Twitter in seconds. It was caroming throughout the stadium. When the game ended and Luck walked off the field in street clothes the fans who loved him an hour before booed him. Loudly. "I’d be lying if I said I didn’t hear it," he said, forced to make his announcement that night. "It hurt." And there you have the perfect epitaph to an NFL career cut short by choice: It hurt. That is what this sport does to a body and a mind. It hurts. It leaves scars. It makes men in their 30s limp. It leaves hands gnarled and misshapen. It cuts short lives, and sometimes makes the end of those lives torturous. Congratulations to Luck for getting out when he could, on his terms. For understanding there is more to life than football. To read my entire recent column, please visit Luck Deserves Praise For Putting Health, Life Above Football.

Previous most recent other columns: Hurricanes Have Only Themselves To Blame For Opening Loss / Zero Doubt: Rosen, Not Fitzpatrick, Must Start For Dolphins / Here's Why Canes Took Bold Gamble on Jarren Williams at QB/ Dolphins' Ross Cannot Be Surprised By Major Fallout Over Trump Fundraiser / Le Batard on Miami Radio Turmoil: 'We Were Evicted' / and Buoniconti: Hall of Famer, But Even Greater Off the Field.

Select other recent columns: Don't Overthink It, Dolphins. Start Rosen / How Brian Flores Won Dolphins Players' Respect Before Ever Coaching A Game / Countdown To Hurricanes-Gators On As Practices Begin / In Tyreek Hill, Goodell And NFL Turn Blind Eye To Domestic Violence / Le Batard Defies Trump, ESPN's No-Politics Policy / The 4 Ways Miami Heat Had A Winning Offseason / What If Everybody's Wrong About The Dolphins? / Wimbledon, Tiger, U.S. Women For Starters. Why 2019 Is Greatest Sports Year Ever / Heat And Riley Lose On Westbrook, But Loss Might Still Be A Win / Coco's Wimbledon Runs Ends, But U.S. Tennis Just Found Its Next Big Thing / Queens of the World. U.S. Soccer Wins Again / Bold Moves To Get Jimmy Butler Make Heat -- And Pat Riley -- Relevant Again / New-look Panthers: Lots Of Hope, Zero Excuses Left / It Is Megan Rapinoe's World Cup -- On And Off The Field / An Era Ends As Panthers' Luongo Retires / Heat's Haslem Doesn't Need Us Telling Him Whether To Retire / Drip Or Swag, Herro Brings It, And Heat Need It / O.J. Can Tweet What He Wants, But How He's Seen Is Not Up To Him / Ranking Dolphins, Heat, Marlins & Panthers' Best Young Players / Heat Must Dump Bad Contracts Starting With Whiteside, Dragic /Inter Miami Aiming High With Barca's Suarez / For Marlins, An Encouraging Two Weeks Is Progress / End The Illogical Shame and Honor Schnellenberger / Smart Decision A No-Brainer: Dolphins Should Start Rosen / Dolphins Land Big Prize in Wilkins / Oh To Be Hated Again! Lean Times For Miami Sports / Why Tiger's Masters Triumph Is About More Than Golf / Case For Kaepernick's Comeback As A Dolphin / Transgender-Athlete Firestorm A Necessary Debate / Across the Rio Grande to the PGA Tour / From Dark and Empty to Top Of the World: Dan Le Batard at 50 / And, our Dwyane Wade Farewell Trilogy: The Last Star: Post-Wade, Miami Sports Is Bereft; Wade Fittingly Goes Out A Winner And 30-point Star; and Thank You, Dwyane Wade, Miami's G.O.A.T.