1) It's SATURDAY, JULY 6. Hope y'all had a Happy Fourth of July, my fellow Americans! Don't always like my president. Always love my country. 2) Always football season around here, so always the right time to check out our 'Fins At 50' book for the Dolfans in your life, at Amazon. 3) In The Previous Blogpost (ITPB): Heat get Jimmy Butler, Megan Rapinoe owns World Cup, Hot Button Top 10, Raconteurs video & more. 4) Join us on Twitter @gregcote. Also Facebook and Instagram.

My Megan Rapinoe, Jimmy Butler and Florida Panthers columns: It Is Megan Rapinoe's World Cup -- On And Off The Field and Bold Moves To Get Jimmy Butler Make Heat -- And Pat Riley -- Relevant Again and New-look Panthers: Lots Of Hope, Zero Excuses Left.

HAPPY FOURTH OF JULY MY FELLOW AMERICANS: The country we love can be great, but only if we make it better:

SORRY, LEBRON. NO LAST LAUGH. KAWHI REPORTEDLY HEADED TO CLIPPERS: Update: Sorry, LeBron. ESPN reporting Kawhi Leonard headed to Clippers. Original post: With the ball on his palm, in basketball IQ, in business dealings, in shaping his own brand, we should agree LeBron James is brilliant in in lots of ways. We have learned something new this summer, though. We have learned how astute James is at recognizing how the man in the mirror has changed. He is 34 now, relegated to third-team All-NBA last season. He is no longer the consensus best player in the league — not when age is factored. More significantly, he now seems content with not even being the best player on his team. This summer has been about James admitting he needs help. It has been about him orchestrating the end of his career, and making it easier for him to age gracefully, not desperately. It has been about him trying to make sure that epic career goes out on top — brilliant again, if he can pull it off. LeBron haters were reveling last season as the Lakers went 37-45 and missed the playoffs in his first season in L.A. What had he gotten himself into? Well, with Anthony Davis now beside him and Kawhi Leonard maybe joining him, too, LeBron is poised to have the ultimate last laugh. We explore more deeply in our newest column. To read, please visit Kawhi to Lakers Would Mean More Rings, Last Laugh For LeBron. 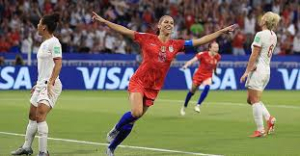 "LET'S GOOOOO STATES!" U.S. BEATS ENGLAND, REACHES WORLD CUP FINAL!: It took a winning goal by birthday girl Alex Morgan (pictured) yesterday to beat England 2-1 in France and vault the Americans into Sunday's Women's World Cup final. Also took two huge second half occurrences -- a review call that (properly) negated an England goal, and a U.S. goalkeeper save on a Brits penalty kick. Megan Rapinoe sat out with a hamstring injury. No problem, evidently. For my column off the game, please visit U.S. Women Reach World Cup Final -- Not With Arrogance, But Excellence. The United States national team has now rolled through this soccer World Cup with a 6-0 record, 24-3 goals differential, and having never trailed and been tied only twice once. In short the USWNT has shown why it is the reigning world champion and No. 1-ranked team as it guns for its fourth World Cup trophy. England has never won but had a best-ever third place finish four years ago. The Americans advance to play the finale vs. the winner of today's other semifinal: Netherlands-Sweden.

MORGAN SCORES WINNER, SIPS TEA: Alex Morgan's winning goal for U.S. Tuesday, followed by her sipping-tea celebration that conveys American arrogance to others which is why I love it. No, she is not pretending to take a puff from a joint! She is pretending to sip tea with pinky raised. Jolly good! Cheerio!

BIG SPLASH BY OLDIES RILEY, TALLON: I get to call Heat president Pat Riley and Panthers general manager Dale Tallon old because I'm old. And both veteran team builders were pouring like good wine this week as their teams stepped hard and well into NBA and NHL free agency. Riley, entering the summer seemingly capped-out and hands-tied, managed to get four-time all-star Jimmy Butler, keep Goran Dragic and unload Hassan Whiteside, all positives, and to do it gave up (player-wise) only Josh Richardson, whose rise stalled last season. (Read Bold Moves To Get Jimmy Butler Make Heat -- And Pat Riley -- Relevant Again). And Tallon made a bunch of smaller moves and one big one, landing goaltender Sergei Bobrovsky, two-time Vezina Trophy winner, the best available in free agency and Florida's top target. (Read Why Florida Panthers Are Poised To (Finally) Be The Next Big Thing. Good work by both men.

Other most recent columns: An Era Ends As Panthers' Luongo Retires / Heat's Haslem Doesn't Need Us Telling Him Whether To Retire / Drip Or Swag, Herro Brings It, And Heat Need It / Heat, Riley Need To Have Hit Big With Herro / Heat Can Only Watch As Seismic Talent Shift Quakes NBA / O.J. Can Tweet What He Wants, But How He's Seen Is Not Up To Him.

Select earlier recent columns: U.S. Women's Soccer Should Be Celebrated -- No Apologies / Miami Dolphins Will Be Better Than You Think In 2019 /  Ranking Dolphins, Heat, Marlins & Panthers' Best Young Players / Heat Must Dump Bad Contracts Starting With Whiteside, Dragic /Inter Miami Aiming High With Barca's Suarez / Reasons To Like Flores & 5 Keys To Dolphins Season / For Marlins, An Encouraging Two Weeks Is Progress / End The Illogical Shame and Honor Schnellenberger / Smart Decision A No-Brainer: Dolphins Should Start Rosen / Maximum Security's Disqualification Is Kentucky Derby's Ultimate Stain / Dolphins Land Big Prize in Wilkins / Oh To Be Hated Again! Lean Times For Miami Sports / Why Tiger's Masters Triumph Is About More Than Golf / Why Tannehill's Legacy Probably Isn't What You Think / Case For Kaepernick's Comeback As A Dolphin / Transgender-Athlete Firestorm A Necessary Debate / Across the Rio Grande to the PGA Tour / From Dark and Empty to Top Of the World: Dan Le Batard at 50 / And, our Dwyane Wade Farewell Trilogy: The Last Star: Post-Wade, Miami Sports Is Bereft; Wade Fittingly Goes Out A Winner And 30-point Star; and Thank You, Dwyane Wade, Miami's G.O.A.T.