« Latest Hot Button Top 10 (updated): See who's No. 1 this week and what else falls where; plus our latest columns, Greg Cote Day countdown, 'Redesigning Women' video & more | Main | Latest Hot Button Top 10 (updated): Dolphins and Canes' camp openings battle for No. 1 and see what else falls where; plus thank you Fort Myers, our latest columns & more »

How Flores won Dolphins' respect before ever coaching a game. New column; plus it's Greg Cote Day!, latest on Le Batard drama, countdown to Canes-Gators opener, NFL's weak lenience on Tyreek Hill, return of 'Soup of the Day' (with video), The List & more

1) It's SATURDAY, JULY 27. It's always the perfect time to check out my 'Fins At 50' book at Amazon. 2) In The Previous Blogpost (ITPB): Hot Button Top 10, Greg Cote Day countdown, meet the Highwomen & more. 3) Join us on Twitter @gregcote. Also on Facebook and Instagram.

It's Greg Cote Day!: We began a 10-day countdown to Greg Cote Day on Saturday, July 27 at Hammond Stadium, home of the minor-league Fort Myers Miracle, and it's now that day! (Always said that for me to have a Greg Cote Day would take a Miracle, so I was right). I'll be meeting fans, throwing out the first pitch, singing the national anthem and playing left field. All but one of those four things is actually true. Will I see you there? It's just a couple of hours west of South Florida. Tickets are going fast. Well, I don't really know if they are or not. But they might be! In any case click HERE for the link to buy yours.

FLORES IN COMMAND OF HIS TEAM AS DOLPHINS OPEN CAMP: Veteran quarterback Ryan Fitzpatrick today from the first practice of Dolphins preseason training camp, on rookie head coach Brian Flores: "A great demeanor. Very genuine. He’s coming from a good place and the right place. He’s got the attention, command and respect of the team, and that can be hard for a first-year head coach." Flores, a four-time champion from the Bill Belichick tree, seems comfortably in charge as a first-time head coach. It is fair for Dolfans to wonder if Flores will be a good coach. I might prefer to wonder if he might be a great one. I have a feeling the Fins have finally hit on the right guy. To read my newest column in full, kindly visit How Brian Flores Won Dolphins Players' Respect Before Ever Coaching A Game. 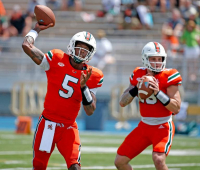 ONE MONTH AWAY, CANES-GATORS FULL OF HIGH STAKES, VINTAGE ACRIMONY. COLUMN: Let the one-month countdown begin, because four weeks of hype is not too much for this. Miami Hurricanes. Florida Gators. Neutral site. Two old rivals. Two pedigreed programs trying to be great again. Two high-aiming teams acting pretty cocky and trying to build evidence why they should be. As the Canes begin preseason practice Friday night working toward the Aug. 24 opener in Orlando, we’ve already been reminded why we’ve missed what used to be UM’s greatest rivalry. Miami and the hated Gators played every season for a half century, through 1987, but next month will be meeting for only the seventh time since and the first time in six years. Meantime the battle is on to see who'll start at quarterback in that game, with a still-unsettled competition led by returner N'Kosi Perry and transfer Tate Martell (pictured left to right). I whet the appetite for Canes football season in my recent column. To read it in full, please visit Countdown To Hurricanes-Gators On As Practices Begin.

ON NFL'S ODD LENIENCE TOWARD TYREEK HILL. COLUMN: The NFL routinely suspends for instances of domestic violence even when the accused is not prosecuted. It happened again just Monday when the league banned Seattle's Jarran Reed six games  even though he was never arrested or charged. So why did Kansas City star receiver Tyreek Hill get no suspension from the NFL -- not even a game or two? Even though he has pleaded guilty to hitting and injuring his then-pregnant girlfriend, has been investigated for child abuse, and is heard on a more recent audiotape threatening that same woman? It seems like odd, unjust lenience -- a non-sentence that stunned the league. We explore why in our recent column. To read it in full, kindly visit In Tyreek Hill, Goodell And NFL Turn Blind Eye To Domestic Violence.

Our previous other most recent columns: Le Batard Defies Trump, ESPN's No-Politics Policy / The 4 Ways Miami Heat Had A Winning Offseason / What If Everybody's Wrong About The Dolphins? / and Wimbledon, Tiger, U.S. Women For Starters. Why 2019 Is Greatest Sports Year Ever.

THE LIST: FORBES' 2019 MOST VALUABLE SPORTS TEAMS: Forbes' 2019 list of 50 most valuable sports teams in the world includes 26 from the NFL, nine from MLB, eight from soccer and seven from the NBA. Here are the top 10, plus state of Florida teams in the 50, with all dollar figures in billions:

RETURN OF 'SOUP OF THE DAY': MOON SOUP: Back In My Day and Soup of the Day are my occasional benchmark segments on the Le Batard Show. Hadn't done Soup of the Day in a long while, but brought it back yesterday. Enjoy:

Select other recent columns: On Brink Of History At Wimbledon, Serena Is Denied Again / Heat And Riley Lose On Westbrook, But Loss Might Still Be  A Win / If You Don't Like Rapinoe, USWNT -- That's On You, Not Them / Coco's Wimbledon Runs Ends, But U.S. Tennis Just Found Its Next Big Thing / Queens of the World. U.S. Soccer Wins Again / U.S. Women Reach World Cup Final -- Not With Arrogance, But Excellence / Bold Moves To Get Jimmy Butler Make Heat -- And Pat Riley -- Relevant Again / New-look Panthers: Lots Of Hope, Zero Excuses Left / It Is Megan Rapinoe's World Cup -- On And Off The Field / Kawhi to Lakers Would Mean More Rings, Last Laugh For LeBron / An Era Ends As Panthers' Luongo Retires / Heat's Haslem Doesn't Need Us Telling Him Whether To Retire / Drip Or Swag, Herro Brings It, And Heat Need It / O.J. Can Tweet What He Wants, But How He's Seen Is Not Up To Him / U.S. Women's Soccer Should Be Celebrated -- No Apologies / Miami Dolphins Will Be Better Than You Think In 2019 /  Ranking Dolphins, Heat, Marlins & Panthers' Best Young Players / Heat Must Dump Bad Contracts Starting With Whiteside, Dragic /Inter Miami Aiming High With Barca's Suarez / Reasons To Like Flores & 5 Keys To Dolphins Season / For Marlins, An Encouraging Two Weeks Is Progress / End The Illogical Shame and Honor Schnellenberger / Smart Decision A No-Brainer: Dolphins Should Start Rosen / Dolphins Land Big Prize in Wilkins / Oh To Be Hated Again! Lean Times For Miami Sports / Why Tiger's Masters Triumph Is About More Than Golf / Case For Kaepernick's Comeback As A Dolphin / Transgender-Athlete Firestorm A Necessary Debate / Across the Rio Grande to the PGA Tour / From Dark and Empty to Top Of the World: Dan Le Batard at 50 / And, our Dwyane Wade Farewell Trilogy: The Last Star: Post-Wade, Miami Sports Is Bereft; Wade Fittingly Goes Out A Winner And 30-point Star; and Thank You, Dwyane Wade, Miami's G.O.A.T.