Serena denied again in hunt for record. New column; plus Heat loses on Westbrook, but why that could still be win for Miami; also, if you find USWNT polarizing that's on you, not them; U.S. tennis finds new star in Coco Gauff & more

1) It's SATURDAY, JULY 13. Happy 80th birthday to Mavis Staples this week, one of the great voices and messengers of my life, an American icon. 2) Always football season around here, so always the right time to check out our 'Fins At 50' book for the Dolfans in your life, at Amazon. 3) In The Previous Blogpost (ITPB): U.S. wins Women's World Cup with column, Hot Button Top 10 & more. 4) Join us on Twitter @gregcote. Also on Facebook and Instagram.

SERENA DENIED AGAIN IN PURSUIT OF MAJORS RECORD: Serena Williams (and older sister Venus) introduced themselves at what is now the Miami Open on Key Biscayne, circa late '90s. Now, 21 years later, at age 37, Serena is fighting younger opponents -- and time -- in pursuit of Margaret Court's all-time record of 24 major titles. She has 23. She could have equaled the record Saturday in the final at Wimbledon but was dominated by Simona Halep in a 6-2, 6-2 loss -- her sixth straight time trying and failing to get from 23 to 24. "I'll keep fighting," she said afterward. Her next chance: the U.S. Open commencing in last August. For my column on Serena, from the teenager we first met to the warrior still slugging it out, kindly visit On Brink Of History At Wimbledon, Serena Is Denied Again.

HEAT LOSE OUT ON WESTBROOK. BUT WAS IT REALLY A LOSS? NEW COLUMN: The Miami Heat and Pat Riley lost out on Russell Westbrook on Thursday night -- but it might have been closer to a win than a loss. Sometimes, the best trade is the one not made. Yes, the Heat would have been better or at least more dynamic and interesting in the short term by pairing Westbrook with recently acquired Jimmy Butler. But at what cost? That was the line Riley smartly drew. Giving up the young core of Bam Adebayo, Justise Winslow and June top draft pick Tyler Herro, and more, was too much for Westbrook, whose mega-contract would have grown more and more onerous. Miami in four years would have been paying $47 million to an aging 34-year-old player. So Westbrook reunites in Houston with James Harden instead. Star-chasing is fine, but not to add a veteran while pilfering your own future. Likewise, Miami must be wary of trading for  Bradley Beal if that comes with the John Wall baggage and also costs that young core. And wary of trading for Chris Paul if it drains you of money to be a player in 2021 free agency. I discuss all this and more in my latest column off last night's Westbrook trade to Houston, not Miami. To read it in full, kindly visit Heat And Riley Lose On Westbrook, But Loss Might Still Be  A Win. 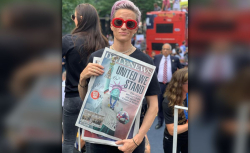 CHAMPION U.S. WOMEN'S TEAM MAY BE POLARIZING, BUT THAT'S GOOD: Sometime during the victory celebration along the “Canyon of Heroes” in New York City on Wednesday, U.S. soccer star Megan Rapinoe was handed a Daily News cover that depicts the Statue of Liberty cleverly holding the Women’s World Cup championship trophy instead of a torch. That wasn’t what made Rapinoe hold the newspaper with a smirking frown on her face, a sort of #SMH (shake my head) expression. It was the bold headline in big block letters: UNITED WE STAND. "Really?" Rapinoe’s look seemed to be saying. "Really!?" Later that night — as if on cue — one or more persons walking around full of hate vandalized six Rapinoe posters at the subway station near Sixth Avenue and 42nd Street in Manhattan. Police are investigating it as a possible hate crime. The posters read, “Dream With Us.” Either that message, or perhaps the fact Rapinoe is gay, led the vandals to scrawl “shemale” and “screw that [bleep]” over her face. United we stand? The preceding is in the intro to my column off the parade. Rapinoe and her USWNT teammates are excellent on the field -- World Cup champs -- and loud off it, loud for LGBTQ equality, racial justice, pay equity. That makes them polarizing to some. If so that's on the offended, the "Shut up and play" crowd -- not o them. For that column in full, please visit If You Don't Like Rapinoe, USWNT -- That's On You, Not Them.

HEAT'S PURSUIT OF WESTBROOK IS RILEY'S ALL-OUT, URGENT GAMBLE: [Note: This was my column from earlier in the week, when Miami appeared to be the favorite to land Westbrook]. Did you not think he was going to go out swinging? That he was going to sit quietly in the corner? That a long basketball career full of noise was going to ebb with a whisper? Then you don’t know Pat Riley. Haven’t followed his career real closely. Riley making something of nothing this summer for the Miami Heat — trading for star Jimmy Butler and now angling for an even bigger star in Russell Westbrook — is less surprising than if the Heat’s president had stood pat, OK with mediocrity and the hope something might happen a couple of summers from now, maybe. Instead, the Heat’s godfather is flexing all of the creativity and ingenuity in his toolbox in an impatient desperation to be relevant again, now, not later. Riley is 74 now. When my grandmother was that age she used to like to say “you don’t buy green bananas.” You don’t trust tomorrow. Carpe diem. That's the gist of my recent column. Full for the full read, please visit Heat's Run At Westbrook Is Riley's All-Out Gamble To Win Now. Pictured, Westbrook in a Heat uniform, via clutchpoints.com. 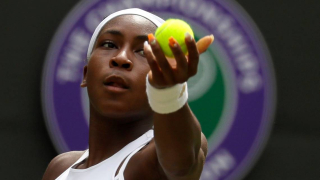 "LOCO FOR COCO!" HAS AMERICAN TENNIS JUST DISCOVERED THE 'NEXT BIG THING' IT SO BADLY NEEDS?: The U.S. winning the Women’s World Cup was the biggest accomplishment in sports the past week, but it wasn’t the most amazing. The continuing reign of Megan Rapinoe, Alex Morgan and the rest of those American stars was expected. What has happened the past week in London, at Wimbledon, was the surreal opposite of expected. Surprise is one of the great joys of sports, the rise of the underdog one of the great delights. The rare moment when someone you had never heard of becomes a star, and you can only imagine the trajectory that lay ahead. Her name is Cori (Coco) Gauff. That's the start of my recent column. To read it, kindly visit Coco's Wimbledon Runs Ends, But U.S. Tennis Just Found Its Next Big Thing. At 15 Gauff was the youngest Wimbledon qualifier of the Open era, and youngest to win a match since 1991, before losing in the fourth round Monday to former world No. 1 Simona Halep. It gives hope that American tennis has found its next big star, and I write why that is so needed: On the men’s side, John Isner, aged 34, is, at No. 12 in the ATP rankings, the only American in the top 30. No U.S. male has won a major since Andre Agassi and Andy Roddick in 2003. For the women, Serena Williams is 37 now and sister Venus is 39. Someone must take the baton. Sloane Stephens currently is the highest American woman in the WTA rankings at No. 9, and by winning the 2017 U.S. Open became the first U.S. major winner not named Williams since 2002. But Stephens already is 26, an age by which Serena already had won eight majors. That is to say, Stephens’ career arc suggests a very good player, but one who must accelerate and find another gear to reach and sustain the next-big-star level. Coco Gauff has famously said, "I want to be the best ever. I want to be better than Serena." Tennis is infamously noted for its early flameouts and burnouts, the phenom at 17 and done by 23 type. It will be interesting to see if Coco Gauff can rise above that and fulfill the potential she offered a tantalizing hint of at Wimbledon.

A handful of other most recent columns: Queens of the World. U.S. Soccer Wins Again. Also: U.S. Women Reach World Cup Final -- Not With Arrogance, But Excellence / Bold Moves To Get Jimmy Butler Make Heat -- And Pat Riley -- Relevant Again / New-look Panthers: Lots Of Hope, Zero Excuses Left / and It Is Megan Rapinoe's World Cup -- On And Off The Field.

"CUCKOO FOR COCOA PUFFS!": : Watching Delray Beach 15-year-old Cori (Coco) Gauff play Wimbledon the past week and writing about her in my latest column (linked above), I was drawn by her nickname Coco to recall the "Cuckoo for Cocoa Puffs" cereal commercials of yesteryear. They began after the introduction of the "Sonny the Cuckoo Bird" mascot in 1962. In the TV ads, Sonny attempts to concentrate on normal tasks but ends up coming across some reference to Cocoa Puffs and is enthusiastically distracted. Fast fact: The actual cuckoo (pictured right) is a mostly grayish-brown European bird (Cuculus canorus) that is a parasite given to laying its eggs in the nests of other birds which then raise the offspring.

Select other recent columns: Kawhi to Lakers Would Mean More Rings, Last Laugh For LeBron / An Era Ends As Panthers' Luongo Retires / Heat's Haslem Doesn't Need Us Telling Him Whether To Retire / Drip Or Swag, Herro Brings It, And Heat Need It / O.J. Can Tweet What He Wants, But How He's Seen Is Not Up To Him / U.S. Women's Soccer Should Be Celebrated -- No Apologies / Miami Dolphins Will Be Better Than You Think In 2019 /  Ranking Dolphins, Heat, Marlins & Panthers' Best Young Players / Heat Must Dump Bad Contracts Starting With Whiteside, Dragic /Inter Miami Aiming High With Barca's Suarez / Reasons To Like Flores & 5 Keys To Dolphins Season / For Marlins, An Encouraging Two Weeks Is Progress / End The Illogical Shame and Honor Schnellenberger / Smart Decision A No-Brainer: Dolphins Should Start Rosen / Dolphins Land Big Prize in Wilkins / Oh To Be Hated Again! Lean Times For Miami Sports / Why Tiger's Masters Triumph Is About More Than Golf / Case For Kaepernick's Comeback As A Dolphin / Transgender-Athlete Firestorm A Necessary Debate / Across the Rio Grande to the PGA Tour / From Dark and Empty to Top Of the World: Dan Le Batard at 50 / And, our Dwyane Wade Farewell Trilogy: The Last Star: Post-Wade, Miami Sports Is Bereft; Wade Fittingly Goes Out A Winner And 30-point Star; and Thank You, Dwyane Wade, Miami's G.O.A.T.