« Latest Hot Button Top 10 (updated): See the late flip at No. 1 and what else falls where; plus Happy Father's Day, our latest column links, Taylor Swift's anti-hate anthem & more | Main | Latest Hot Button Top 10 (updated): Heat, soccer, drafts brawl for top spot. See who gets it, and what else falls where this week; plus our two Heat draft columns (a Herro sandwich) & more »

Drip or swag, Herro brings what Heat needs. New column; plus Riley needs to have hit big in draft, Panthers go goalie in draft, O.J. Simpson on Twitter and reaction, latest Back In My Day (Band-Aids!), Taylor Swift's message & more

1) It's SATURDAY, JUNE 22. Excited about the inaugural Miami Beach Pop Festival Nov. 8-10 on the sands of South Beach -- especially The Raconteurs, who are second-line on the bill but should be co-headliners. 2) Here's the new Back In My Day that premiered this week on the Le Batard Show on ESPN Radio/ESPNews: BIMD: Band-Aids! 3) Always football season, so always the right time to check out our 'Fins At 50' book for the Dolfans in your life, here: Amazon. 4) In The Previous Blogpost (ITPB): Hot Button Top 10, Father's Day, Taylor Swift anti-hate video & more. 5) Join us on Twitter @gregcote. Also Facebook and Instagram. 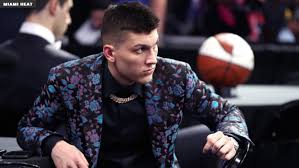 DRIP AND SWAG, SPARK AND SPLASH AS HEAT INTRODUCE HERRO: Tyler Herro’s personality can be loud. That we know already. Will his NBA game be just as loud? Half of the fun is in the finding out. Meantime let’s appreciate the personality while fans hope the skills back it up. We need it. The down Miami Heat franchise needs it. South Florida sports needs it. He boasted on draft night Thursday that he had “the most drip in the room” -- as a million older white folks like myself probably said, “What’d he just say? The most what!?” The most drip as in street slang for the most swagger. The most drip as in the floral purple jacket he wore to his entree into the NBA. The most drip as in the rope of gold chain around his neck, and the fat, blingy watch on his left wrist. His game backs it up. "He checks every single box," said Pat Riley on Friday as he introduced Herro. To read my newest column, please visit Drip Or Swag, Herro Brings It, And Heat Need It.

WHY HEAT, RILEY NEED TO HIT BIG WITH HERRO AS NO. 1 DRAFT PICK: The pressure isn't on Kentucky guard Tyler Herro to be great as much as it's on Heat president Pat Riley to have been spot-on in seeing greatness in the kid. Riley ended a draft slump by getting Bam Adebayo, Justise Winslow and Josh Richardson in the previous two drafts. Now he needs to keep the run going with last night's bounty: Herro (pictured), whom most mock drafts pegged going a bit lower than 13th overall, and Stanford forward KZ Okpala, whom the Heat traded up to select in the second round. If either or both can become starters or at least promising rotation contributors -- if both show promise -- Miami's roster will look a lot better a year from now to available 2020 free agents when the Heat next has big money to spend. I explore all of this in my column on the pick. To read, visit Heat, Riley Need To Have Hit Big With Herro.

PANTHERS GO GOALIE IN NHL DRAFT: Florida Panthers Friday night selected America goaltender Spencer Knight, 18, with the 13th overall pick in the NHL Draft. Best goalie in the draft at a position of urgent need = smart pick. ESPN's scouting report: "The things that makes Knight (pictured) exceptional among his goaltending peers is elite hockey sense, tremendous athleticism balanced with controlled play, great footwork and size and elite puck-moving abilities. I don't put huge value on a goalie's puckhandling skills, but Knight's are so good it's hard not to mention. Knight has really grown a lot in his confidence and poise in the net. There's such little flash in Knight's game, and that's a good thing. He's just always in the right spot because he tracks and anticipates as well as any goalie prospect I've seen in the past few years." Cats still will pursue veteran all-star goalie Sergei Bobrovsky in coming free agency. It all spells the likely end of the line for longtime Panther Roberto Luongo, a franchise great but now 40.

HEAT'S FALL FROM CENTER OF PARADE TO SPECTATORS: To quote the top of my own new column in what may or may not be a fit of narcissism: "We were the parade, once. Now we’re on the curb, watching. The NBA is somebody else’s party now. Miami has gone from epicenter to spectator. Basketball summers in South Florida were nearly as exciting as the seasons because Pat Riley and the Heat could be expected to be 'in the room' with top free agents. Now here we are, water all around us and not a whale in sight. Being out of the playoffs is bad enough. Being out of the mix might be worse." Tonight is the NBA Draft, then comes free agency -- basketball's big summer -- but the Heat (selecting 13th overall tonight) figures to be pretty quiet. I explore how and why in my recent column. To read, kindly visit Heat Can Only Watch As Seismic Talent Shift Quakes NBA. Pictured: Been a minute since Riley was happy enough to dance over the fortunes of his franchise. 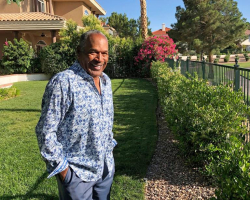 O.J. SIMPSON IS ON TWITTER. UH OH: Disgraced former Bills star escapes on two murder charges, later serves nine years for armed robbery, is paroled, spends a couple of quiet years under the radar in Vegas and -- now -- reemerges on social media with a Twitter account @TheRealOJ32. "I got a little gettin' even to do," he says in his first video. Wants to "set the record straight," he says in another. What he really wants, obviously, to to remake his image into the good guy who did his time and now wants back into the mainstream. (A smiling O.J. is pictured outside his home in Las Vegas in a recent Los Angeles Times photo that accompanied an AP story headlined, '25 years after murders, O.J. says 'Life is fine'). Simpson isn't the first shamed celebrity to see social media as a means of making over his persona and hoping people will allow him a reboot. The thing is, that is entirely up to us, the public, not up to him. Friendly tweets aren't unlikely to change the minds of the millions who will always think he got away with murder. I explore all of this in my recent column. To read, please visit O.J. Can Tweet What He Wants, But How He's Seen Is Not Up To Him. Below, a Twitter response to an O.J. tweet that is, frankly, what Simpson had to know he was getting into by opening himself up to social media: 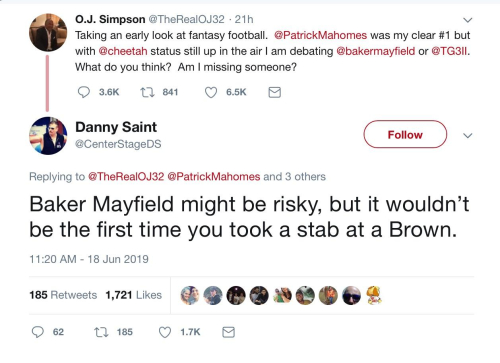 Our other most recent columns: Heat Must Dump Bad Contracts Starting With Whiteside, Dragic / Why Florida Panthers Are Poised To (Finally) Be The Next Big Thing / U.S. Women's Soccer Should Be Celebrated -- No Apologies / Miami Dolphins Will Be Better Than You Think In 2019 / Inter Miami Aiming High With Barca's Suarez / Ranking Dolphins, Heat, Marlins & Panthers' Best Young Players.

#YNTCDMUSICVIDEO: I posted the lyric video for this in my previous blogpost. Here's the proper full video, with array of cameo appearances. The song is good. The message is better:Other select recent columns: Durant Legacy Wobbles With Finals Reinjury / Reasons To Like Flores & 5 Keys To Dolphins Season / For Marlins, An Encouraging Two Weeks Is Progress / Buckner Legacy One Of Notoriety And Forgiveness /End The Illogical Shame and Honor Schnellenberger / Meet Tyler Gaffalione: Local Jockey Who Made It Big / Smart Decision A No-Brainer: Dolphins Should Start Rosen / Maximum Security's Disqualification Is Kentucky Derby's Ultimate Stain / Dolphins Land Big Prize in Wilkins / Oh To Be Hated Again! Lean Times For Miami Sports / Why Tiger's Masters Triumph Is About More Than Golf / Why Tannehill's Legacy Probably Isn't What You Think / Case For Kaepernick's Comeback As A Dolphin / Transgender-Athlete Firestorm A Necessary Debate / Across the Rio Grande to the PGA Tour / From Dark and Empty to Top Of the World: Dan Le Batard at 50 / And our Dwyane Wade Farewell Trilogy: The Last Star: Post-Wade, Miami Sports Is Bereft; Wade Fittingly Goes Out A Winner And 30-point Star; and Thank You, Dwyane Wade, Miami's G.O.A.T.