1) It's SATURDAY, MAY 25. It's always football season, so it's always the right time to check out our 'Fins At 50' book for the Dolfans in your life. Learn more or buy on Amazon. 2) In The Previous Blogpost (ITPB): Hot Button Top 10, why Rosen should start over Fitzpatrick, Le Batard Show in New York & more. 3) Join us on Twitter @gregcote. Also Facebook and Instagram.

hockey playoff series 22 seasons ago and Marlins haven’t made the postseason in 13 years or had a winning record in 10. (Even the reliable Heat missed the playoffs). So how bad do we have it in South Florida pro sports? I did the research and was stunned to find, for example, the the Fins' 45-year title drought doesn't even make the Top 20 for such futility. If misery loves company this your column, Miami, as we present the update Sports Fan Misery Index encompassing the 123 franchises in the NFL, NBA, MLB and NHL. To read our latest column, please visit Take Heart, South Florida. Were Bad, But Hardly Alone. 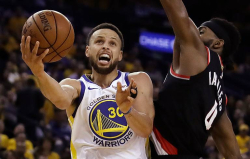 HEAT, REST OF NBA CAN ONLY GENUFLECT AT WARRIORS' EPIC GREATNESS: Golden State is in a fifth straight NBA Finals, the longest NBA streak since the Boston Celtics made a crazy 10 in a row in 1957-66. Unless you know something I don't, the Warriors are steaming toward a fourth championship in that span. After sweeping Portland in the West finals, it defies logic to imagine GS will now lose in the Finals to a Milwaukee team struggling to survive Toronto in the East. The Warriors are so good they win with Kevin Durant out injured. Steph Curry (pictured) is so good he has scored 33, 36, 37, 36 and 37 points in his last 4 1/2 games. Some say Durant is the best player in the NBA. I say he isn't even the best player on his own team. The Warriors and Curry are climbing the charts in terms of greatest teams and players ever. I explore all of this in my latest column, and also discuss the tough spot teams like the Miami Heat are in as they struggle to regain relevance in the deep shadow of a modern NBA dynasty. To read, please visit Riley, Heat, Everyone Else Chasing Warriors' Epic Greatness. 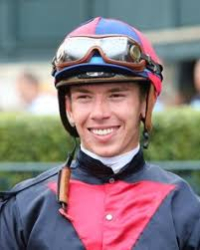 FROM DAVIE AND GULFSTREAM PARK, THE FEEL-GOOD STORY HORSE RACING NEEDS: You may have noticed. I break from the Dolphins/Heat/ball sports rut whenever I can, as much as I can get away with, to write about different stuff. So the jockey who won the Preakness on Saturday (pictured) happens to be a young man who grew up in the town of Davie, with Gulfstream his home track. Now, at 24, he already has won more than 1,000 career races and $42 million in purse money. I think this third-generation jockey's story is worth telling, and knowing. Hope you might agree. To read it, please visit Meet Tyler Gaffalione: Local Jockey Who Made It (Really) Big.

Other most recent columns: Smart Decision A No-Brainer: Dolphins Should Start Rosen / Zion Williamson's Power to Reject the Lottery / Dreaming Of a Heat Lottery Night Miracle / All The Ways Dolphins Are Finally Headed Right / Inter Miami's Demolition Ceremony Begins Frantic Race To The Finish / Maximum Security's Disqualification Is Kentucky Derby's Ultimate Stain / Brady Is As Brady As Ever / Marlins Losing Big Now, But A Future Is Emerging / Welcome to the New America, Lexi Thompson.

THE RETURN OF THE RACONTEURS: After two albums (remember the songs "Steady As She Goes" and of course the sports staple "Seven Nation Army"?) and then a 10-year hiatus, The Raconteurs are back, led by Jack White and co-fronted by Brendan Benson (far right below), who is  the son of one of my best friends. Can't wait to see them in a live show again. Below is "Help Me Stranger," the latest video offered from their forthcoming new album:

Select other recent columns: Dolphins Land Big Prize in Wilkins / Everything Aligning for Dolphins to Land Tagovailoa in '20 / Oh To Be Hated Again! Lean Times For Miami Sports / Why Tiger's Masters Triumph Is About So Much More Than Golf / In Joel Quenneville, Panthers Get Their Riley, Their Shula / Dwyane Wade Trilogy: The Last Star: Post-Wade, Miami Sports Is Bereft, Wade Fittingly Goes Out A Winner And A 30-point Star and Thank You, Dwyane Wade, Miami's G.O.A.T. / Why Tannehill's Legacy Probably Isn't What You Think / Case For Kaepernick's Comeback As A Dolphin / Transgender-Athlete Firestorm A Necessary Debate / Across the Rio Grande to the PGA Tour / From Dark and Empty to Top Of the World: Dan Le Batard at 50.