« The ugly America we have become through the prism of sports. Newest column; plus 3 reasons this might prove to be Dolphins' best draft in more than 20 years, latest Back In My Day video (Phones!), your grade on Fins draft & more | Main | Robbery at Churchill Downs! Equine outrage and this week's Hot Button Top 10 (updated): See who's No. 1 and what else lands where; plus Brady, Marlins, Lexi, Rosen (links to our latest columns) & more »

Dolphins, Jets, Bills make strides at QB, but Brady is as Brady as ever. New column; plus positives of Jeter's Marlins rebuild emerging even amid losing, Dolphins get their prize in first '20 mock draft, Killian and Aquinas make exclusive list & more

1) It's SATURDAY, MAY 4. If you missed it visit BIMD: Phones! for our newest Back In My Day video from this week's Le Batard show on ESPN. 2) Football is never done, so it's always the perfect time to buy our 'Fins At 50' book for the Dolfans in your life. Learn more or buy on Amazon. 3) In The Previous Blogpost (ITPB): Ugly America through prism of sports, why this could be watershed Dolphins draft, latest Back In My Day (Phones!), your verdict on Fins draft & more. 4) Join us on Twitter @gregcote. Also Facebook and Instagram.

New column: Rest of AFC East growing, but Brady is as Brady as ever: Jets have their franchise QB in Sam Darnold. Bills love their new guy in Josh Allen. Dolphins have Josh Rosen now and (they hope) Tua Tagovailoa in a year. The rest of the AFC East is making strides at the key position/ The problem? Tom Brady is as Brady as ever. For my latest column, please visit, Brady Is As Brady As Ever. 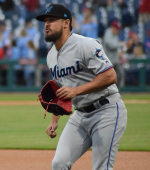 MARLINS LOSING BIG, BUT SIGNS OF JETER'S PLAN ARE EMERGING:  To much of Baseball Nation the Marlins are a joke. And with reason. Worst record in MLB. Lowest attendance in the majors. Last year's No. 1 prospect, Lewis Brinson, demoted to the minors because he can't seem to hit .200. But in my newest column I explore all the ways that signs of Derek Jeter's grand reboot plan are emerging, even amid the squalor of this losing season. The starting pitching in particular and a now-deep minor league pipeline in general make Miami a club with a future. (Current best pitcher Caleb Smith is pictured). I spoke with a bunch of fans for this column and quote a few of them in it. And I'll say this: The hard core of 7,000 or 8,000 Marlins fans are some of the best in South Florida. Their optimism and vision, despite the losing all around them, is pretty impressive. To read this latest column please visit Marlins Losing Big Now, But A Future Is Emerging.

Other most recent columns: Welcome to the New America, Lexi Thompson / Rosen Has Chance To Turn A Good Dolphins Draft Great / Dolphins Big Winners With Draft-Day Trade For QB Rosen / Dolphins Land Big Prize in Wilkins / Dolphins at 13: Twice Lucky, One Horrific Tragedy / Everything Aligning for Dolphins to Land Tagovailoa in '20 / Oh To Be Hated Again! Lean Times For Miami Sports / Le Batard Takes Miami To Manhattan / Why Tiger's Masters Triumph Is About So Much More Than Golf / In Joel Quenneville, Panthers Get Their Riley, Their Shula / And our Dwyane Wade Week trilogy: The Last Star: Post-Wade, Miami Sports Is Bereft / Wade Fittingly Goes Out A Winner And A 30-point Star / And Thank You, Dwyane Wade, Miami's G.O.A.T.

MCSHAY: TAGOVAILOA TO DOLPHINS IN 2020: In his way-too-early-but-I'm-doin'-it-anyway first 2020 mock draft, ESPN's Todd McShay has Dolfan dreams come true with Alabama QB Tua Tagovailoa (pictured) going No. 1 overall to Miami. If it happens, after one season, Josh Rosen will be bumped yet again by his team taking a QB first overall. Three other things notable from McShay's mock: Other QBs in first round are Oregon's Justin Herbert, fifth to Raiders, and Iowa's Nate Stanley, 31st to Chargers. No Jake Fromm of Georgia. 2) Florida CB C.J. Henderson, 11th to 49ers, and Gators DE Jabari Zuniga, 21st to Titans, are the only state-college players taken. And 3) More than one-third of the first round, 11 of 32 players, are from Alabama (seven) or Clemson (four).

KILLIAN, AQUINAS MAKE RARE LIST: Miami Killian and Fort Lauderdale's St. Thomas Aquinas are two of only 12 high schools nationwide to have had multiple player selected in the recent NFL Draft, with two each. Killina draftees both were Miami Hurricanes: Sheldrick Redwine and Jaquan Johnson. Aquinas' draftees were No. 2 overall selection Nick Bosa and Jordan Scarlett. The only schools with three players each were in Cocoa, Florida and Allen, Texas. Florida schools led all states with a combined 34 draftees, followed by Texas with 27 and California with 22.

Select other columns: Bosh Honored On A Wistful Night Of 'What If' / Beckham's Miami Soccer Odyssey Takes Latest Detour / Will Diaz's Canes Justify 'The New Miami' Hype? / Why Tannehill's Legacy Probably Isn't What You Think / Case For Kaepernick's Comeback As A Dolphin / 'Coach Crutch' Has Nova Southeastern Soaring / Trip to Miami Inspired a National Bobblehead Shrine / The Intrigue Left: Will LeBron Go Out On Top? / Transgender-Athlete Firestorm A Necessary Debate / Across the Rio Grande to the PGA Tour / From Dark and Empty to Top Of the World: Dan Le Batard at 50.