1) It's FRIDAY, APRIL 5. Visit Breakfast! for the new Back In My Day that debuted on Tuesday's Le Batard Show on ESPN Radio and ESPNews. 2) Football is never done, and so it's always the perfect time to buy our 'Fins At 50' book for the Dolfans in your life. Learn more or buy on Amazon. 3) In The Previous Blogpost (ITPB): Hot Button Top 10, Florida Derby, the 3 bonus delights of Wade's farewell season, our updated NCAA bracket, your Marlins-expectations verdict & more. 4) Join us on Twitter @gregcote. Also Facebook and Instagram.

THE THREE BONUS DELIGHTS OF WADE'S 'ONE LAST DANCE': Even in last night's hurtful home loss to Boston that (at least temporarily) dropped the Miami Heat off playoff pace with four games left, it was easy to appreciate the three bonus delights of Dwyane Wade's farewell season. For my latest column from the arena last night, please visit Playoff Chase Drama Enriches Wade's Swansong.

ESPN: D-LINE THE DOLPHINS' FIRST-ROUND TARGET: The latest guess by ESPN's rival mock drafters, Mel Kiper and Todd McShay, is that the Miami Dolphins will go defensive line with the 13th overall pick later this month. Kiper has Miami selecting Michigan defensive end Rashan Gary, saying, "You have to think the Dolphins, who are undergoing a serious rebuild, would be thrilled to get a high-ceiling pass-rusher like Gary here." McShay has the Fins taking Houston defensive tackle Ed Oliver, saying, "In this scenario, the top quarterbacks are gone. Don't overthink it; take the best available player. That's Oliver." (Gary and Oliver are pictured). QBs Kyler Murray of Oklahoma and Dwayne Haskins of Ohio State definitely will be gone before Miami picks. There is a chance Missouri's Drew Lock could be available to the Dolphins, but Kiper and McShay have him going 11th and 10th, respectively. Kiper has Duke QB Daniel Jones going 15th overall. McShay has Miami selecting  North Carolina State passer Ryan Finely in the second round. 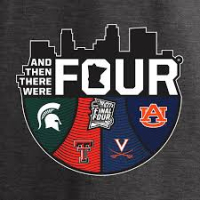 THE GLORY OF AN UNEXPECTED FINAL FOUR!: No blue blood programs. No Cinderellas. No Zion Williamson. No problem. Why this NCAA Tournament men's Final Four is a really good and refreshingly interesting one is the gist of my newest offering. Visit An Intriguing Final Four Despite What's Missing to read our latest column. Virginia vs. Auburn and Michigan State vs. Texas Tech this Saturday in Minneapolis gives us three programs trying to win a first national championship -- two in their first Final Four and one last this far in 1984. Then there's Michigan State, after its first national title since 2000. I both want and think Virginia will win it all, with no rooting interest other than the health of my barely breathing bracket, as I have the Cavaliers as champs and nobody else still alive. Curious what y'all think so we offer "will" and "want" polls below, with teams listed alphabetically. Who you think WILL win seeks your honest prediction, who you'd bet money one. Who you WANT to win is strictly your (or your bracket's) rooting interest. Take a dip in both polls. Vote now!

A REBUTTAL TO KISZLA ON ROCKIES VS. MARLINS: Denver Post sports columnist Mark Kiszla during the recent Marlins-Rockies series wrote one of those my-

city's-better-than-your-city columns by saying that, of the two teams that both entered MLB in 1993, the Rockies have been much more successful even though the Marlins are ahead 2-0 in World Series titles, because they have bigger crowds. I'll give him the fan factor, although championships are sort of you, know, how success is measured! The Rockies have won nothing despite the stats-ballooning advantage of high altitude, by the way. (Kiszla also mocks the Marlins Park neighborhood with a couple of gratuitous Hispanic-stereotype swipes). I got an interesting email from a Marlins fan living in Colorado, who passed along a letter he'd written to the Denver Post. Here it is with his permission, only very slightly condensed:

Kiz,
I’d like to say, 'I hate to tell you' but it actually gives me great satisfaction to say, 'Marlins 2, Rockies 0!' It is telling that you have to take cheap shots at an entire fan base to make you feel good about yourself.  Last I checked, Marlins were 110-97 against the Rockies. That means the Marlins have won more games against the Rox, just to clarify. This town, Denver, places a huge emphasis on winning. (I’ve been to more than one Broncos game vs. Miami where I felt my family’s safety was compromised by drunken Bronco fans because we were winning).  Seems like the Marlins have a winning record against the Rox, a fact you overlooked in your assassination piece on Marlin fans. May I also point out that the Marlins are batting a thousand in the World Series?  I seem to recall the Rox are batting zero in the World Series. As a Marlins fan living in Colorado for the last 20 years, I have to say I am disappointed, albeit not surprised, in your feeble attempts at self-aggrandizement. You should be ashamed for stopping to such low levels as to attack an entire fan base, when what matters in Colorado is wins and losses. On that point, the Marlins clearly are the winners.
Warm Regards,
Andy Anderson
Conifer, Colorado

Our other most recent columns: A horse once for sale for $16,000 in a claiming race wins the Florida Derby. Read Maximum Security, Maximum Results, because you needn't be a fan of horse racing to appreciate what happened at Gulfstream Park. Also, from Marlins Opening Day: Growing Pains Commence For Rebuilding Marlins. And previewing the season: The Marlins Will Be Better Than You Think.

Other select recent columns: Bosh Honored On A Wistful Night Of 'What If' / Beckham's Miami Soccer Odyssey Takes Latest Detour / Will Diaz's Canes Justify 'The New Miami' Hype? / Why Tannehill's Legacy Probably Isn't What You Think / Case For Kaepernick's Comeback As A Dolphin / 'Coach Crutch' Has Nova Southeastern Soaring / Dolphins Not Better Now Than When Last Season Ended / Trip to Miami Inspired a National Bobblehead Shrine / Jeter Gets Reminder Why Marlins Boss Is His Toughest Position Yet / The Intrigue Left: Will LeBron Go Out On Top? / Transgender-Athlete Firestorm A Necessary Debate / Across the Rio Grande to the PGA Tour / From Dark and Empty to Top Of the World: Dan Le Batard at 50.