« Dolphins trade for QB Rosen in 2nd round! Huge. My new column; plus Fins land Clemson DT Wilkins in 1st. Like pick? Poll. Last day to vote!; also, my thoughts on Wilkins, our Mock Draft & more | Main | The ugly America we have become through the prism of sports. Newest column; plus 3 reasons this might prove to be Dolphins' best draft in more than 20 years, latest Back In My Day video (Phones!), your grade on Fins draft & more »

What do you think of the Miami Dolphins 2019 draft results? Grade it in poll. Last day to vote!; plus latest Hot Button Top 10 (updated) & more

It's MONDAY, APRIL 29. Football is never done, so it's always the perfect time to buy our 'Fins At 50' book for the Dolfans in your life. Learn more or buy on Amazon. 2) In The Previous Blogpost (ITPB): Dolphins trade for QB Rosen, poll on DT WIlkins pick, The List (Fins draft history in 13 range), your verdict on position Miami should target & more. 3) Join us on Twitter @gregcote. Also Facebook and Instagram. 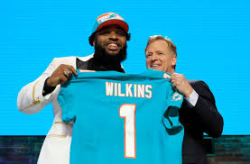 GRADE THE DOLPHINS DRAFT. NEW POLL. VOTE NOW!: Any team's draft of course cannot truly and fairly be graded for a year or two, when we see how players are panning out. But I'm not writing an encyclopedia here. This is a blog. You don't need time for a gut reaction -- a sense of how the Dolphins did based on caliber of players they got and needs met. Are you feeling good about the draft or not? I've not met many sports fans incapable or unwilling to have a strong opinion fast. So let's go! I list the Dolphins' 2019 draft bounty below, then invite your overall opinion in a poll. I include quarterback Josh Rosen, who was acquired in a draft-day trade for, essentially, a second-round pick, because he is very much a part of who Miami got in this draft. Ready, set, vote!

1. DOLPHINS: Wilkins pick, Rosen trade highlight Miami's NFL Draft: An elite defensive tackle in Clemson's Christian Wilkins and a potential franchise quarterback in Josh Rosen (via trade from Arizona) provided a big 1-2 punch to open Miami's draft work. Most thought Wilkins would be gone before the 13th pick, and getting Rosen, a top-10 pick last year, for a low second-rounder felt like a steal. The bad news? Tougher now in 2019 to "Tank for Tua" -- the grand-prize QB the Fins should still take in next year's draft if they're bad enough to have the chance.

2. NBA: Celtics, Warriors take series Game 1s: Celtics routed top-seeded Bucks in Milwaukee on Sunday, while the Warriors and the referees beat the Rockets out west to both take Game 1s of their conference semifinal series. Raptors had previously had won their Game 1 over 76ers. Nuggets-Trail Blazers Game 1 is tonight. Overarching questions: Can Greek Freak lead the Bucks back? And are champion Warriors as vulnerable as they seem?

3. NFL: Kyler Murray, Giants' reach talk of draft: Arizona selected QB Kyler Murray No. 1 overall as expected (leading to Miami getting Josh Rosen in a trade), but the surprise of the first round had to be the Giants taking Duke QB Daniel Jones sixth overall. Huh? Wha! Jones was thought to be a second-round pick, maybe even a third. Somebody give Giants GM Dave Gettleman a Breathalyzer test.

5. MARLINS: So much for that brief hot warm streak: Fish had won four of past six games before losing last three in a row in Philly to fall to an MLB-worst 8-20. Marlins welcome Cleveland on Tuesday as they return home, large, adoring crowds will surely be waiting (!).

6. NHL: It's down to eight for the Stanley Cup: We're early in the conference semifinals for the NHL's last eight teams skating and on Sunday Carolina took a 2-0 seriess lead over the Islanders while the Avalanche tied the Sharks 1-1 in their series. Notably, no Canadian teams are left, so the sad streak continues: No Stanley Cup since 1993 for the nation that invented hockey.

7. AUTO RACING: Miami loses Formula One race: Miami has held up an Unwelcome sign to Formula One, and so the Miami Grand Prix ain't happening. A planned race in 2020 is being scrapped due to delays in approval by lawmakers, after a planned race in 2019 was erased by complaints from residents about the proposed 2.6-mile track running down Biscayne Boulevard and through Bayfront Park. On top of the recent news Homestead was losing its NASCAR season-finale championship race -- another blow to local motorsports fans.

8.HORSE RACING: It's Derby Week in America!: Triple Crown season in thoroughbred racing kicks off in six days with next Saturday's Kentucky Derby at Churchill Downs. Omaha Beach and Roadster are co-betting favorites at 7-2 odds, but Florida Derby winner Maximum Security is climbing and now is fourth fave at 6-1. Go Max!

9. CANES BASEBALL: UM ranked and movin' up after sweep: UM baseball is 31-14, ranked No. 24 in the polls and sure to move up in next ranking after Sunday completing a three-game home sweep of Virginia Tech. After a rough patch or two, first-year coach Gino DiMare has his machine humming.

10. RUNNING: Miami Corporate Run draws 27K: The annual Miami Corporate Run drew 26,698 pavement pounders from 882 companies, and the men's and women's winners were Dan Nestor and Ana Villegas. It was believed to be the first time in he history of running that a footrace was not won by somebody from Kenya.

Missing the HB10 cut: Vladimir Guerrero Jr. has been in the big leagues about a minute and a half and I'm already getting tired of the hype ..... UFC Fort Lauderdale (Fight Night 150) went off Saturday night at Sunrise arena, with ex-NFL player Greg Hardy winning a round 1 knockout ..... How can a Chiefs fan -- how could any fan -- ever cheer for Tyreek Hill again? ..... Heat's Goran Dragic hasn't decided whether to opt-in for $19.2 million. Hassan Whiteside also faces that option at $27.2M. If both opt in, Miami will be over salary cap before it makes any moves ..... Clemson's Dabo Swinney is now the highest paid coach in college football. Anybody wanna start a GoFundMe page for poor Nick Saban? ..... National champion Virginia men's basketball has declined to be honored at the White House. Isn't this where Trump claims they weren't invited to begin with? ..... Anybody else believe Tiger Woods has yet to take off that green jacket and even showers in it? ..... Champions League semifinals commence with first leg of Tottenham-Ajax on Tuesday. The sexier other semi: Liverpool-Barcelona ..... That reminds me. Cannot wait for Watford to stun Manchester City at Wembley in the May 18 FA Cup final. Go Hornets! ..... Update: Countdown now 2,611 days (give or take) until Miami hosts its first match in the 2026 World Cup ..... R.I.P., John Havlicek. Hondo.

Other most recent columns: Dolphins at 13: Twice Lucky, One Horrific Tragedy / Everything Aligning for Dolphins to Land Tagovailoa in '20 / Oh To Be Hated Again! Lean Times For Miami Sports / Le Batard Takes Miami To Manhattan / Why Tiger's Masters Triumph Is About So Much More Than Golf / In Joel Quenneville, Panthers Get Their Riley, Their Shula / And our Dwyane Wade Week trilogy: The Last Star: Post-Wade, Miami Sports Is Bereft / Wade Fittingly Goes Out A Winner And A 30-point Star / And Thank You, Dwyane Wade, Miami's G.O.A.T.

Select other columns: Bosh Honored On A Wistful Night Of 'What If' / Beckham's Miami Soccer Odyssey Takes Latest Detour / Will Diaz's Canes Justify 'The New Miami' Hype? / Why Tannehill's Legacy Probably Isn't What You Think / Case For Kaepernick's Comeback As A Dolphin / 'Coach Crutch' Has Nova Southeastern Soaring / Trip to Miami Inspired a National Bobblehead Shrine / The Intrigue Left: Will LeBron Go Out On Top? / Transgender-Athlete Firestorm A Necessary Debate / Across the Rio Grande to the PGA Tour / From Dark and Empty to Top Of the World: Dan Le Batard at 50.