« Latest Hot Button Top 10 (updated): See what takes over No. 1 this week and what else falls where; plus Luck and tragedy when Dolphins draft 13th (newest column), Happy Earth Day & more | Main | Dolphins trade for QB Rosen in 2nd round! Huge. My new column; plus Fins land Clemson DT Wilkins in 1st. Like pick? Poll. Last day to vote!; also, my thoughts on Wilkins, our Mock Draft & more »

It's WEDNESDAY, APRIL 24. Note: Our 28th annual Official Miami Herald Mock Draft will be online beginning noon today/Wednesday! 2) Football is never done, and so it's always the perfect time to buy our 'Fins At 50' book for the Dolfans in your life. Learn more or buy on Amazon. 3) In The Previous Blogpost (ITPB): Hot Button Top 10, Luck and Tragedy when Dolphins draft 13th & more. 4) Join us on Twitter @gregcote. Also Facebook and Instagram.

Latest column: Luck & tragedy when the Dolphins draft 13th: Miami was lucky to draft tackle Laremey Tunsil and lucky to draft linebacker/end A.J. Duhe. But running back David Overstreet in between ended in tragedy. Across a 40-year span, all those three had in common was being selected 13th overall in the NFL Draft. With Dolphins set to pick 13th again this week, we look back at the three very disparate circumstances of the franchise's experience selecting there. To read, visit Dolphins at 13: Twice Lucky, One Horrific Tragedy.

Other most recent columns: Everything Aligning for Dolphins to Land Tagovailoa / Oh To Be Hated Again! Lean Times For Miami Sports / Le Batard Takes Miami To Manhattan / Why Tiger's Masters Triumph Is About So Much More Than Golf / In Joel Quenneville, Panthers Get Their Riley, Their Shula / And our Dwyane Wade Week trilogy: The Last Star: Post-Wade, Miami Sports Is Bereft / Wade Fittingly Goes Out A Winner And A 30-point Star / And Thank You, Dwyane Wade, Miami's G.O.A.T. 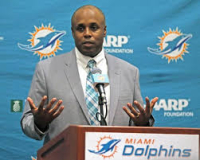 DOLPHINS DRAFT POLL: WHAT POSITION SHOULD BE TARGET AT 13?: This poll assumes Miami keeps the 13th overall pick in Thursday's night's first round and does not trade up or down. This also assumes that, at 13, there are quality, highly rated candidates available at positions of need. In other words, all things being equal, what position would you most like to see the Dolphins target for their No.1 draft pick? The three listed in the poll are alphabetical. Then there is a "something else" category as well as a category to appease the BAA crowd (Best Available Athlete). Chief decider Chris Grier, who'll run the Fins draft, is pictured. Be Grier for a day. Don't vote for what you predict will happen. Vote for what you think the team should do or what you'd like it to do; your call. Go!

ODD DRAFT TRIVIA: Is superstition in play? Only one quarterback in history has ever been selected No. 13 in the NFL Draft. That was Chris Miller out of Oregon, by the Falcons, in 1987. He had an unremarkable career, making one Pro Bowl in 10 seasons and retiring with 123 touchdown passes, 102 interceptions, a 74.9 passer rating and a 34-58 won-lost record in games started.

THE LIST: MOST GAMES BY PLAYER DRAFTED 13TH: Top 10 most NFL career regular-season games by a player drafted 13th overall:

Select other recent columns: Analyzing, Predicting Dolphins' Next Starting QB / Bosh Honored On A Wistful Night Of 'What If' / Beckham's Miami Soccer Odyssey Takes Latest Detour / Will Diaz's Canes Justify 'The New Miami' Hype? / Why Tannehill's Legacy Probably Isn't What You Think / Case For Kaepernick's Comeback As A Dolphin / 'Coach Crutch' Has Nova Southeastern Soaring / Dolphins Not Better Now Than When Last Season Ended / Trip to Miami Inspired a National Bobblehead Shrine / The Intrigue Left: Will LeBron Go Out On Top? / Transgender-Athlete Firestorm A Necessary Debate / Across the Rio Grande to the PGA Tour / From Dark and Empty to Top Of the World: Dan Le Batard at 50.