1) It's WEDNESDAY, APRIL 17. Visit Hotel Robots! for the new Back In My Day video that premiered on Tuesday's Le Batard Show on ESPN Radio and ESPNews. 2) Football is never done, and so it's always the perfect time to buy our 'Fins At 50' book for the Dolfans in your life. Learn more or buy on Amazon. 3) In The Previous Blogpost (ITPB): Miami Mount GOATmore poll, Dwyane Wade Week columns trilogy, Hot Button Top 10 & more. 4) Join us on Twitter @gregcote. Also Facebook and Instagram. 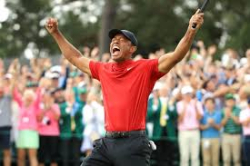 SWEET 15: TIGER'S UNEXPECTED, LONG-AWAITED DAY OF TRIUMPH: We'd begun to write him off if we hadn't already, yes? Fourteen years past his previous Masters win. Eleven years since his last major win of any sort. He was 43. Fading. Stuck for so long at 14 career majors, Tiger's chance of ever catching Jack Nicklaus' record 18 was running away from him. Fast. But then. Magic happened. Tiger was Tiger again. Riveting attention again on a Sunday at August. Slipping on a green jacket. What a weekend for Tiger, for golf, for sports. And beyond. There was something about what just happened that is very personal to Woods, and bigger than golf. This is my latest column. To read it, please visit Why Tiger's Masters Triumph Is About So Much More Than Golf.

Our trilogy of Dwyane Wade Week columns: No. 3 -- The Last Star: Post-Wade, Miami Sports Is Bereft. Exploring what's next, who's next, in the tremendous void left by Dwyane Wade's Miami Heat retirement. From his final home game -- Wade Fittingly Goes Out A Winner And A 30-point Star. How No. 3, the Heat, fans and this community stuck the landing on an emotional night of gratitude. And the first -- Thank You, Dwyane Wade, Miami's G.O.A.T.Unabashedly, a tribute column for the retiring generational star who meant so much to a city.

Other most recent columns: In Joel Quenneville, Panthers Get Their Riley, Their Shula & Analyzing, Predicting Dolphins' Next Starting QB.

POLL RESULT: STUNNER! SHULA HOLDS OFF WADE AS MIAMI SPORTS' G.O.A.T.: We asked, "Which major Miami team-sports figure has accomplished and meant the most to South Florida?" We narrowed it down to our Mount Rushmore foursome, and listed them alphabetically in the poll. Your results: Don Shula 42.20 percent, Dwyane Wade 32.95%, Dan Marino 20.23% and Pat Riley 4.62%. I say that's a stunner partly because of the timing. The poll appeared in the midst of Wade's retirement and final game and the lovefest that ensued. And yet Shula's longevity, those two Super Bowl rings and the Perfect Season were not forgotten. Miami as first and foremost a football town may have played a role, too. Wasn't surprised Riley was fourth. Was a bit surprised Shula prevailed over Marino as well as over Wade. My vote would have been for Wade (close), but I respect your collective choice and cannot say a vote for Shula wasn't legit.

FINS' QB FITZPATRICK, ET AL, AT AUGUSTA: Dolphins quarterback Ryan Fitzpatrick & His Fabulous Beard, Jets QB Sam Darnold and Bills QB Josh Allen filmed a bit at Augusta  prior to The Masters, a closest-to-the-in contest that was really just a pimp for the Maxfli Tour golf ball. Fitzbeardrick sort of emceed, a nod to seniority. Allen won the contest. But the highlight is just a few seconds in when Fitzpatrick introduces himself and the other two and says, "...and Tom B-- ... most of the AFC East quarterbacks," making fun of the I'm-too-good-for-this absence of the Pats' Tom Brady. Fun, short video. To watch it on Instagram, go HERE.

Select other recent columns: Bosh Honored On A Wistful Night Of 'What If' / Beckham's Miami Soccer Odyssey Takes Latest Detour / Will Diaz's Canes Justify 'The New Miami' Hype? / Why Tannehill's Legacy Probably Isn't What You Think / Case For Kaepernick's Comeback As A Dolphin / 'Coach Crutch' Has Nova Southeastern Soaring / Dolphins Not Better Now Than When Last Season Ended / Trip to Miami Inspired a National Bobblehead Shrine / The Intrigue Left: Will LeBron Go Out On Top? / Transgender-Athlete Firestorm A Necessary Debate / Across the Rio Grande to the PGA Tour / From Dark and Empty to Top Of the World: Dan Le Batard at 50.