« Latest Hot Button Top 10 (updated): See who's No. 1 this week and what else falls where; plus our Dolphins/Kaepernick column, grading-Tannehill-era poll (last day to vote!), 'Greg Cote Day' & more | Main | Latest Hot Button Top 10 (updated): See who wins the fierce fight for No. 1 and what else lands where; plus Heat playoff poll (vote now!), our Beckham's Miami soccer odyssey column, Haiku Challenge news & more »

Entries close noon today in 14th annual March Madness Haiku Challenge! Find rules and how to enter here and do it now!; plus our Canes-football-hype column, Tannehill's legacy and your verdict on his Dolphins era, Radio Friday & more

1) It's FRIDAY, MARCH 22. Visit Greg Cote Tuesday for the best-of podcast from this week's Le Batard Show on ESPN Radio. Included: the newest Back In My Day (Coupons!). 2) Football is never done, and so it's always the perfect time to buy our 'Fins At 50' book for the Dolfans in your life. Check it out on Amazon. 3) In The Previous Blogpost (ITPB): Hot Button Top 10, Dolphins/Kaepernick column, Tannehill-era poll, 'Greg Cote Day' & more. 4) Join us on Twitter @gregcote. Also Facebook and Instagram.

14TH ANNUAL MARCH MADNESS HAIKU CHALLENGE! ENTER NOW!: We have done the Haiku Challenge for as long as we've had this blog and it is back for tradition's sake and by unpopular demand. Actually we had a record number of entries last year (128), so let's see if we'll raise the bar even higher. I know

many of you are intimidated by this contest, or simply do not agree that nothing captures America's mania over the NCAA Tournament and bracketeering like ancient Japanese short-form poetry. I do not do this for the masses, but for the select few creative minds and poets among you. Think of it like a restaurant that offers liver. They know very few like it, but they know the few who do love it. You may know that a haiku is a 17-syllable poem ideally but not necessarily in 5-7-5 structure. Rhyming? Fine, but not necessary. Here's an example of a standard 5-7-5 haiku: "An ocean voyage / As waves break over the bow / the sea welcomes me." Got it ? OK, now apply that to March Madness.

1. Your poem must be 17 total syllables exactly and must in some way be about the NCAA Tournament, March Madness or college basketball.

2. You may submit entries ONLY one of two ways: Via email to gcote@miamiherald.com with Haiku in the subject line, or via Twitter @gregcote with the hashtag #Haiku.

3. Entries were accepted starting Tuesday and will end at noon sharp on Friday, March 22. No hard limit on entries per person, but keep it to a handful max, please.

Grand Champion will be announced by me here in the blog and on Twitter Sunday, March 24. The winner's prize? I dunno. Maybe a Dolphins media guide, a meet-and-greet with Le Batard Show or something equally crappy. But don't do it for the prize. Do it for the sheer glory and empowering feeling of inner enrichment and Zen. Ready? Haiku! 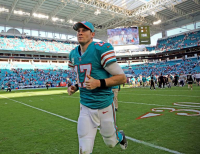 TANNEHILL'S LEGACY: MALIGNED, NOT AS BAD AS WE THOUGHT: I examine what I think is the Dolphins legacy of departed quarterback Ryan Tannehill in my recent column. Please visit Why Tannehill's Legacy Probably Isn't What You Think to read in full. The column also tips a farewell cap to sack-man Cameron Wake and running back Frank Gore, also both departed. Collectively, Tannehill, Wake and Gore were major players meriting our retrospective.

Other most recent columns: The Case For Kaepernick's Comeback As A Dolphin / 'Coach Crutch' Has Nova Southeastern Soaring / Dolphins Not Better Now Than When Last Season Ended / Trip to Miami Inspired a National Bobblehead Shrine / Jeter Gets Reminder Why Marlins Boss Is His Toughest Position Yet / The Intrigue Left: Will LeBron Go Out On Top? / Transgender-Athlete Firestorm A Necessary Debate / Across the Rio Grande to the PGA Tour.

POLL RESULT: TANNEHILL ERA GETS AVERAGE GRADE: We asked, "How would you grade Ryan Tannehill's career with the Miami Dolphins?" We eliminated A's and F's to prevent the craziest and unfairest votes. Instead we offered the nine choices of B-plus/B/B-minus, C-plus/C/C-minus, and D-plus/D/D-minus. Combining the results into one letter grade, "C" dominated with 58.29 percent of the total. Then it was close between "B" (21.39%) and "D" (20.32). Bottom line answer: A majority of you graded Tannehill's Fins career average, with a near-even split on those who found it above or below average.

Select other recent columns: A Case For Tannehill, Gore And Wake All Returning / Riley Scoffs At Retirement Because His Work Isn't Done / Wade's 'Last Dance' A Masterwork In How To Say Goodbye / Six Reasons To Be Hopeful About Marlins' Rebuild / Stain On NFL Stays Until Kaepernick Is Signed / He Was Wrong To Stiff Caddie, But Vilifying Kuchar is Wrong, Too / Why Murray Is Perfect Fit For Dolphins / From Dark and Empty to the Top Of the World: Dan Le Batard at 50.