« A Necessary Firestorm: Why Martina Navratilova's controversial comments on transgender athletes sparks a valuable conversation. Our new column; plus latest Hot Button Top 10 (updated), Radio Tuesday, our holiday in Mexico & more | Main | Latest Hot Button Top 10 (updated): See who's No. 1 and what else lands where this week; plus our newest column (Dolphins), Blake Shelton Friends and Heroes concert review & more »

1) It's FRIDAY, MARCH 8. Big day for Katie Meier, Jim Morris and Canes sports today. Meier's UM women's basketball team opens play in the ACC Tournament, looking for a good run to enhance its positioning for the upcoming NCAA Tournament. And Morris, longtime former baseball coach, gets his No. 3 retired as Miami opens ACC play. 2) Football is never done, and so it's always the perfect time to buy our 'Fins At 50' book for the Dolfans in your life. Check it out on Amazon. 3) In The Previous Blogpost (ITPB): Martina Navratilova starts a Necessary Firestorm, Hot Button Top 10, Radio Tuesday & more. 4) Join us on Twitter @gregcote. Also Facebook and Instagram.

It's Radio Friday!: Double-duty this week as I'm back co-hosting today on the Dan Le Batard Show With Stugotz. It airs 10 a.m. to 1 p.m. nationally on ESPN Radio and ESPNews, after a local-only 8:55-10 hour on Miami's 790 The Ticket. Join us! 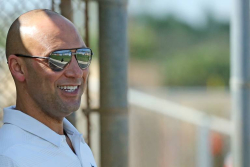 SHORTSTOP FOR YANKEES? NAH. JETER IN HIS TOUGHEST POSITION YET, RIGHT NOW,  WITH MARLINS: Impossible task, really. Derek Jeter, Marlins CEO, goes from being the king of New York, The Captain, to the baseball basement, trying to completely reboot the Marlins. This begins Year 2. Jeter has at times portrayed his inbred competitiveness, professing a lack of patience for losing. But, just this week, Jeter was extolling the ballpark enhancements and said (unfortunately for him): "Look, people come and they don’t even know who won or lost sometimes. They don’t even know who was playing. But they do know if they had a good experience, and that’s what we’re focusing on." OK, show of hands. Who's ever been at a Marlins game and been unsure of who was playing or who won? Jeter was all but admitting the Marlins' "focus" is on ballpark enhancements helping you endure the expected continued losing as the cub regrows from the ground up. For more, visit my new column here: Jeter Gets Reminder Why Marlins Boss Is His Toughest Position Yet.

Other most recent columns: The Intrigue Left: Will LeBron Go Out On Top?, as King James' first season in L.A. turns nightmare. Transgender-Athlete Firestorm A Necessary Debate, on why what Martina Navratilova said merits civil discussion. And Across the Rio Grande to the PGA Tour, on the extraordinary, heart-lifting journey of Jose de Jesus Rodriguez.

LATEST 'BACK IN MY DAY': GOLF DRIVING RANGES!: This is my newest Back In My Day video that premiered Tuesday on the Le Batard Show on ESPN Radio/ESPNews:

Other select recent columns: The Evolution Of Sports Into Big Business / Riley Scoffs At Retirement Because His Work Isn't Done / Zion Should Say See-Ya Duke and Shut It Down / Wade's 'Last Dance' A Masterwork In How To Say Goodbye / Six Reasons To Be Hopeful About Marlins' Rebuild / Stain On NFL Stays Until Kaepernick Is Signed / He Was Wrong To Stiff Caddie, But Vilifying Kuchar is Wrong, Too / Why Murray Is Perfect Fit For Dolphins / From Dark and Empty to the Top Of the World: Dan Le Batard at 50.