1) It's WEDNESDAY, FEBRUARY 27. I co-hosted LeBatard Show a day earlier than usual this week on ESPN Radio. Visit Greg Cote Monday for the best-of podcast. 2) Black History Month is February. It was first celebrated at Kent State University in 1970 and was officially recognized nationally in 1976. We spent hours one weekend wandering the National Civil Rights Museum in Memphis a couple of  years ago. An irreplaceable trove. Well worth your time and effort! 3) Football is done, but never too late to buy our 'Fins At 50' book for the Dolfans in your life. Check it out on Amazon. 3) In The Previous Blogpost (ITPB): Hot Button Top 10. Le Batard TV show premiere with Riley, Zion Williams Shoegate & more. 4) Join us on Twitter @gregcote. Also Facebook and Instagram.

THE TOP 50 'BREAKTHROUGH MOMENTS' IN SPORTS-BUSINESS HISTORY: A new book, The Sports Business Handbook, says it's been around 50 years since we began to understand that "sports

business" was about more than games and results -- that it also was about deal-making and law and business and marketing and administration in what has become a trillion-dollar industry. "Fifty years ago was around the first time people really started focusing on those off-field things," said author Rick Horrow. "Before that if it wasn't in a box score, it wasn't reported or talked about." The Miami Beach-born Horrow, who hand a hand in shepherding the original Miami Arena into fruition back in the day, includes in the book a chronological list of the top 50 "breakthrough moments" in sports business. I write of this in my latest column; please visit The Evolution Of Sports Into Big Business to read. Two of those beyond-sports moments mentioned have strong South Florida ties: the emergence of the Williams sisters Serena and Venus in tennis, and LeBron James' 'The Decision' that brought his talents to South Beach and the Heat. (I found it interesting that the first and most recent moments listed both were about social justice involving the national anthem: the raised fists on the medal stand during the 1968 Mexico Olympics, and Colin Kaepernick kneeling. Horrow's book has spawned a "symposium tour" that begins Thursday at Harvard University. A stop in Miami  is expected this summer. The book is out next week, and available now at mascot books.com.

Our other most recent columns: Riley Scoffs At Retirement Because His Work Isn't Done / Zion Should Say See-Ya Duke and Shut It Down / Wade's 'Last Dance' A Masterwork In How To Say Goodbye / Six Reasons To Be Hopeful About Marlins' Rebuild /  Stain On NFL Stays Until Kaepernick Is Signed / He Was Wrong To Stiff Caddie, But Vilifying Kuchar is Wrong, Too / Why Murray Is Perfect Fit For Dolphins. 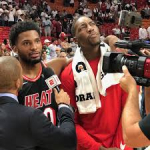 ESPN UNDER-25 LIST SNUBS HEAT: ESPN today tossed out a list of top 25 NBA players under 25. Greak Freak Giannis Antetokounmpo is on top, the usual suspects follow, and the whole list is here, based on a mix of right now and "future potential." Next Superstar Rankings, they call it. What jumped out at me, Mr. Miami, was the absence of any love for any Heat player. The list is a by a panel of three experts with 25 votes each. That's 75 votes, total. Number given to any Heat player: Zero. I thought either or both of the two legit candidates, Justise Winslow and Bam Adebayo (pictured right), might at least have been tossed the crumb of a No. 24 vote something. Nada! (Josh Richardson just missed the poll's kiddie pool at age 26, if you wondered). It's one more gloomy indication that Miami is a team without a current (in-his-prime) superstar and also apparently a team without a future superstar on the roster, at least so says ESPN.

(*) Heat losing at home to Phoenix -- If Miami misses the NBA playoffs, last night's loss will be presented as Exhibit A. Rock bottom. Zero excuse available for a 124-121 home loss to a league-worst Suns team that had lost 17 in a row coming in, and is blatantly tanking for Zion Williamson. Great games by Hassan Whiteside and Kelly Olynyk, wasted. Miami has now lost six home games in a row, once unheard of. The season is turning depressing for Miami, although at least Dwyane Wade's long farewell lends an emotional heft and a reason to keep watching.

(*) Arrest of Robert Kraft -- So the Patriots owner is caught up in a police prostitution sting out of a happy ending massage parlor "day spa" in Jupiter. There are real criminals in this case. They are whomever is involved in the alleged human sex trafficking that may be in play here. Arrest them and throw 'em in jail. But clients unaware of any trafficking who simply went there for what they thought was private enjoyment? Cops have better stuff to do. If a restaurant is selling stolen steaks, you arrest the owner buying them, not the diners.

(*) Alliance of American Football -- The new spring AAF just finished its third weekend and already it has had to be bailed out financially and seen a coach quit. Ratings have dived after initial curiosity made Week 1 numbers encouraging. The whole venture is just one network's content initiative, and it's stumbling early. The question: Will the AAF even survive to welcome a rebooted XFL as competition a year from now? "LOL," says a grinning NFL.

Select recent other columns: Taking On NFL Cost Costas His Job, But Not His Integrity / The State Of South Florida Sports in 2019 / The Redemption Of Manny Diaz / Here's Why Dolphins Hit Big With Flores Gamble / Bonds and Clemens Inch Toward Cooperstown, But A-Rod Faces Tougher Road / Kooch Never Made Canton But Helped Make Dolphins History / From Dark and Empty to the Top Of the World: Dan Le Batard at 50 / Getting Diaz Back The Perfect Fit For UM / Miami's Hate-Hate Relationship With Nick Saban.