« Latest Hot Button Top 10 (updated): See who's No. 1 and what else falls where; plus Kaepernick and Kuchar columns, your verdict on Murray vs. Tagovailoa for Dolphins & more | Main | Why Heat's Pat Riley is defiantly scoffing at retirement. On the premiere of new ESPN/Le Batard TV series with Riles in debut episode; plus Radio Monday (!), latest Hot Button Top 10 (updated) & more »

1) It's WEDNESDAY, FEBRUARY 20. Visit Greg Cote Tuesday for the best-of podcast from yesterday's Le Batard Show on ESPN Radio/ESPNews. Find below the video for the latest Back In My Day segment. 2) Anybody else think Presidents' Day is a lame holiday to have off? Or maybe I'm just bitter I had to work. 3) Football is done, but never too late to buy our 'Fins At 50' book for the Dolfans in your life. Check it out on Amazon. 4) In The Previous Blogpost (ITPB): Hot Button Top 10, Kaepernick case settles, your Dolphins QB verdict & more. 5) Join us on Twitter @gregcote. Also Facebook and Instagram.

NO MATTER HOW SEASON ENDS FOR HEAT, WADE GOES OUT A WINNER: Heat are in Philly tonight to begin the season's second half, with Miami precariously right on the outer edge of playoff contention. Close call whether they make the postseason, but either way, Dwayne Wade, in his 'Last Dance' farewell season, is giving a lesson on how to retire, and when. To read my latest column, please visit Wade's 'Last Dance' A Masterwork In How To Say Goodbye. Wade, feeling the love from coast to coast, is doing it his way, going out on his terms and his timetable. Says No. 3: "For me, to be able to come back to Miami and make the decision this year that I was going to walk away from the game on my own -- under my own will -- it’s a good thing." 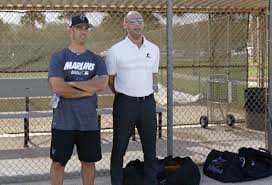 AS SPRING IS SPRUNG, AN OPTIMISTIC TAKE (BELIEVE IT OR NOT) ON THE REBUILDING MARLINS : I ventured north to Jupiter on Monday for the first full-day of Marlins spring training and birthed my latest column. To read it, and I hope you will, please visit Six Reasons To Be Hopeful About Marlins' Rebuild. My six reasons are entitled Pitching, pitching, pitching; A burgeoning farm system; Potential future stars to watch; The broadening scope of the talent search; Stuff behind the scenes you don’t see; and A ‘Yankees South’ feel to the makeover. In the column I detail each and explain why these are all positives. I have been tough on the "Fire-Sale Fish" over the years, and was when the new Derek Jeter regime abruptly traded stars Giancarlo Stanton, Marcell Ozuna and Christian Yelich. But the return is becoming ecvident. There will be lots of losing in the short-term. But I think by around the 2021 season, the club's plea for fans' patience may be showing dividends. Pictured on Monday: Jeter chatting with new special adviser Jorge Posada.

Other most recent columns: Stain On NFL Stays Until Kaepernick Is Signed /  He Was Wrong To Stiff Caddie, But Vilifying Kuchar is Wrong, Too /  Why Murray Is Perfect Fit For Dolphins.

MIAMI, START THAT EBULLIENT "WE'RE NO. 7!" CHANT!: The website 24/7 Wall St. (247wallst.com) lists the Top 20 "Best Cities for Sports Fans" in the U.S. (full ranking here) and Miami comes in a respectable No. 7, trailing only, in order, Los Angeles, Boston, New York City, Chicago, San Antonio and Denver. The methodology is vague but is said to include all American cities/metro areas with at

least one professional team in the NFL, NBA, NHL or MLB, with additional points given for number of teams, number of championships in past decade and consistency of winning, along with team payrolls, presence of major stars and "other measures related to overall experience of being a sports fan." The synopsis on Miami, condensed by me: "While Dolphins had their share of success in 1970s, Heat has been the winningest team recently, with NBA titles in 2006, 2012, and 2013. They are probably most remembered for adding LeBron James and Chris Bosh prior to the 2010-11 season. After six straight trips to the postseason, the Heat qualified in just one of the last three seasons. The Dolphins are most remembered for their perfect season in 1972. The Miami Marlins, who have made it to the postseason in just two of the 25 years of their existence, won the World Series both times — in 1997 and 2003. The Panthers won a conference championship in 1995-96 but have never hoisted the Stanley Cup. They qualified for postseason just twice (2012, 2016) in last 16 years. In Miami, it’s not the humidity, it’s the Heat." My comment: Should we really be lending credence to any gauge that calls L.A. the best city for sports fans?

NEW 'BACK IN MY DAY': MEN'S SOCKS!: Whatever happened to white socks for sneakers and black socks for dress shoes as the simple rule of footdom?

BRANDI CARLILE'S 'THE JOKE': Blog readers know what a huge music fan I am, and I'd heard of but not really knew of Brandi Carlile before seeing her performance of her song, "The Joke," at the recent Grammy Awards. I was blown away. By the song. By the performance. By the message.I hope it means something or moves you in some way as it did me:

Other select recent columns: Taking On NFL Cost Costas His Job, But Not His Integrity / The State Of South Florida Sports in 2019 / The Redemption Of Manny Diaz / Here's Why Dolphins Hit Big With Flores Gamble / Bonds and Clemens Inch Toward Cooperstown, But A-Rod Faces Tougher Road / Kooch Never Made Canton But Helped Make Dolphins History / From Dark and Empty to the Top Of the World: Dan Le Batard at 50 / Wade Deserves All-Star Sendoff / The Dolphins Seem Desperate, And It's About Time / Getting Diaz Back The Perfect Fit For UM / Miami's Hate-Hate Relationship With Nick Saban.