1) It's WEDNESDAY, DECEMBER 26. Hope y'all had a Merry Christmas, fellow Christians, and a joyous holiday season to all! 2) Football is nearing its crescendo and the holidays are upon us. That means it's the perfect time to delight Dolfans you know with the gift of our 'Fins At 50' book. Check it out on Amazon. 3) In The Previous Blogpost (ITPB): Dolphins fall to Jacksonville with DSM poll, Hot Button Top 10, ButchCats & more. 4) Join us on Twitter @gregcote. Also Facebook and Instagram.

Our 'Debacle of Disappearing Dolphins' column: The Grinch stole the playoffs in Sunday's 17-7 Dolphins home loss to Jacksonville. Did he also steal Ryan Tannehill's Fins future and Adam Gase's job? I explore in my column from the stadium off the game. Visit End Of Hope For Dolphins. For Tannehill, Gase, too? to read. 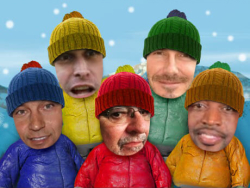 MERRY CHRISTMAS! IT'S OUR ANNUAL HOLIDAY VIDEO AND IT'S HO-HO-HORRRIBLEE!: That's me unsmiling in red with a bad beard. My holiday friends are Marlins boss Derek Jeter in blue, Dolphins coach Adam Gase in yellow, MLS Miami potentate David Beckham in green and of course Heat star Dwyane Wade in whatever the heck color that is. The five of us recently got together for a sled race that was recorded for my annual holiday greeting. (Thanks for taking the time from your busy schedules, fellas). Hope you enjoy! Click MERRY CHRISTMAS 2018 to watch.

ON HEAT'S TELLING TEST TONIGHT: Toronto at Miami tonight is a bigger than typical midseason test for the suddenly surging Heat. (Leading scorer Josh Richardson is pictured). Miami rides the NBA's best current winning streak (five games) to 16-16 and tonight can go over .500 for the first time since 3-2. But to do that they must beat the best team in the league in the Raptors, who are 25-10 and atop the standings. Toronto beat Miami 125-115 one month ago in Canada. Is Miami a team that can contend for a top-four playoff seed or will be scrambling for an eighth? Look for clues tonight. Encouraging sign: The Heat surge has been without Goran Dragic, who is out for several more weeks following knee surgery.

ON DOLPHINS' 2018 TEAM AWARD WINNERS: Announced today, it's cornerback Xavien Howard (pictured) as Most Valuable Player, running back Frank Gore the Leadership Award, quarterback Ryan Tannehill the Courage Award, and wide receiver Kenny Stills the Community Service Award. Quick thoughts: No complaint with any of the choices, but  I don't think it's a good sign when a CB on a middle-of-the-pack pass defense is your season MVP. Or, put another way, when your QB or some other offensive skill-position player failed to rise up and seize the award.

FOLES WINS WEEK, MAHOMES TAKES NARROW LEAD TO FINISH LINE / MIAMI HERALD NFL QB RANKINGS / WEEK 16: The Eagles' Nick Foles (pictured) takes Week 16 honors with a big 58.55-point game, but, more importantly, the Chiefs' Patrick Mahomes maintains his overall No. 1 spot in the Miami Herald's NFL quarterback rankings. Mahomes has a scant 4.20-point lead over the Saints' Drew Brees, and it figures as a two-man race for the season championship entering the final week. Dolphin Ryan Tannehill falls one spot to 30th overall. Our rankings are cumulative, but with bye weeks finished the playing field has leveled for the stretch run. This is our 21st season of Passer Success System (PASS) NFL QB rankings. Our formula is simple and unchanged since its inception in 1998, factoring accuracy, yardage, TD-interception ratio and team result. Most major ranking systems such as the NFL's and ESPN's are complicated and percentile based, allowing QBs who miss half a season to still win a title, while our system is cumulative, rewarding players who are consistently productive and avoid injury or benching. The Top 25 table (plus Dolphins) entering the Week 17 finale:

NFL WEEK 16 PIX 'N FANTASY RESULTS: STRONG ... AND STRONG!: Every Tuesday in the blog I update you on how I did the past weekend with my Miami Herald predictions and with my LeBatard Show/League Of Lobos fantasy team. The latest: Herald picks: Strong. Again. My surreal season continues. We went 15-1 -- yes 15-1 -- overall, missing only on the Dolphins home loss to Jacksonville. (Thanks, Fins). And we were 9-7 against the spread. We nailed yet another Upset of the Week with Ravens winning at Chargers ("Aawwk!"), and two other outright upsets Seahawks beating Chiefs and Raiders beating Broncos last night. Also had a trio of 'dogs-with-points in Redskins, Bengals and Giants. All in all, maybe our best season ever girds for its final week! Greg's Lobos: Strong. The Lobos ended 2-1 in the consolation-bracket playoffs after a 5-8 regular season. We closed with a 167.8 to 125.3 rout of Sarah Spain, led by Deshaun Watson's 36.5 points. We'll get 'em next year, because ... #WeAreTheLobos!

Select other recent columns: Diaz Leaving Is Biggest Canes Loss Of Richt Era / Tannehill's Litmus Test Is Pass or Fail / Oh What We Had, And What We Lost / Wade's World Bigger Than Hoops, And Good For Him / Honeymoon Over: How Collapsing Seasons Put Heat on Gase, Richt / NASCAR Needs A Next Big Thing / No More Excuses, Florida Panthers / To The Good-Guy Grinder In The Shades / Time to Flip the Old Narrative On Miami As a Sports Town / Can Riley Rescue Heat From Purgatory? / When 3 World Cup Legends Were Ours.