1) It's FRIDAY, DECEMBER 28. If you missed it, visit MERRY CHRISTMAS 2018 to watch out annual holiday video. It's ho-ho-horrible! 2) Football is nearing its crescendo and the holidays are upon us. That means it's the perfect time to delight Dolfans you know with the (late) gift of our 'Fins At 50' book. Check it out on Amazon. 3) In The Previous Blogpost (ITPB): Annual Christmas video, Dolphins award winners, Herald NFL QB rankings, Pix 'n Fantasy results & more. 4) Join us on Twitter @gregcote. Also Facebook and Instagram.

On the 'Debacle of the Disappearing Dolphins': The Grinch stole the playoffs in this past Sunday's 17-7 Dolphins home loss to Jacksonville. But did he also steal Ryan Tannehill's Fins future and Adam Gase's job? I explore in my most column. Visit End Of Hope For Dolphins. For Tannehill, Gase, too?

CANESFAN SATISFACTION METER: BOWL/FINAL SEASON: 11.2%: Results are certified in the latest -- and season-ending -- Canesfan Satisfaction Meter postgame poll, and they show a final approval rating of 11.2 percent -- the combination of "very" and "somewhat" satisfied votes -- in the wake of Thursday night's 35-3 loss to Wisconsin in the Pinstripe Bowl in New York, leaving Miami's final season record at 7-6. It's the lowest season rating since 2014. The CSM, completing its 10th season, is your invitation after every Canes football game -- no matter the result or opponent -- to vote on your overall satisfaction with the team and season in a continuing weekly gauge of how UM football fans are feeling. Criteria for voting is your own, but I suggest you consider the most recent game's performance and caliber of opponent, the season as a whole, the program's direction and your overall degree of optimism -- all in the context of reasonable expectations. Because this was the season's final poll, I urged you to please consider placing special emphasis on the season as a whole. Results are certified official the morning after one full day of voting. In this case that was around 11 a.m. today/Saturday. (The CSM also takes place on my Twitter site @gregcote. The approval rating there was 24%).

BOWL: WISCONSIN 35, HURRICANES 3: NO OFFENSE, 5 TURNOVERS, BAD RUN-D SPELL SAD END TO DISAPPOINTING YEAR: Final thoughts: Do not blame the Miami defense for this loss 35-3 loss. I know: 35 points. And I know: 333 yards rushing allowed, 205 by one player. But, no, it was five turnovers, including four interceptions, that killed UM, start to finish. It was an absolute nightmare game by Malik Rosier. UM now 1-8 in its past eight bowl games since 2008 ..... 4Q: Wisconsin 35-3 on 1-yard TD run ... Wisconsin 28-3 on 8-yard TD run following Perry INT ..... 3Q: Wisconsin 21-3 on 2-yard TD run following Rosier INT ... Halftime thoughts: Miami lucky to be trailing by only 14-3, after a very early 14-0 deficit suggested a blowout, three UM  turnovers and two badly missed Wisconsin field goal tries. It should be worse, in other words. Miami still is in it. But it's going to take a turnover-free second half, the Turnover Chain moving again on the Canes' side, and better play from Malik Rosier -- with his arm, not just his legs. That, or Jarren Williams. Just sayin' ..... 1Q: Miami 14-3 on 33-yard FG after Jaquan Johnson INT and Rosier 62-yard run ... Wisconsin 14-0 on 7-yard TD run following Rosier interception ... Wisconsin 7-0 on 35-yard opening-drive TD pass ..... Original post: A year ago these same two programs were ranked and meeting in the top-tier Orange Bowl game, a reward for big seasons. (Wisconsin beat Miami, 34-24). One year later, not so much. Now both teams are a disappointing 7-5 and it's the mid-level Pinstripe Bowl at 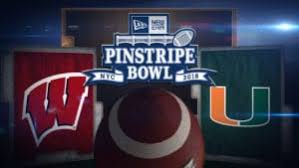 Yankee Stadium in Da Bronx, a weak consolation to end the season. It is the middle game (5:15 kickoff) of three in a row Thursday on ESPN. The overarching theme in the buildup has been the capital-D distractions dogging Miami. First defensive coordinator Manny Diaz bolts to become Temple's head coach. Then came reports maturity-challenged quarterback N'Kosi Perry was in trouble again over a sexually explicit video he posted on Snapchat. But I don't see these as big negatives for UM because A) Although Diaz's departure hurt UM's recruiting and caused a disappointing early signing period this month, Diaz will coach Miami in the bowl, which could be an emotional rallying point for the defense; and B) Does it really matter that veteran Malik Rosier will (likely) start at QB instead of Perry? Not much if any is the correct answer. What does matter, though, is the absence of UM's best run stopper in Gerald Willis, who'll skip the bowl to rehab a hand injury. (The truth? I have little doubt he could play. The same injury hadn't kept him out before. But with the draft coming up he doesn't want to risk aggravating the injury). Other factors favor Miami. Temps in the 50s are forecast, so weather shouldn't be the negative it might have been for UM had it been freezing. I'd also guess Canes will enjoy more crowd support, considering half of New York have relatives living in South Florida. Beyond that I see Miami as slightly better overall, so it isn't surprising UM is favored by 3 points. It also isn't surprising the line is only 3, considering the Badgers have the nation's leading rusher in Jonathan Taylor. Both team's QB turmoil -- Jack Coan starts for Wisconsin because Alex Hornibrook, who blistered UM in last year's Orange Bowl, is out with concussion -- should be offsetting factors. But stopping Taylor will be a handful for Miami -- especially without Willis. A win by Wisconsin would not surprise even a little -- the upset risk is very high -- but I'm going to hunch Rosier leaves smiling from his final college game, and that UM's defense sends Diaz off a winner. My pick: Hurricanes, 24-20.

NFL WEEK 17 PICKS: DOLPHINS-BILLS, GAME OF WEEK, UPSETS AND THE REST: You know I hate to brag, but The Magical Year of Cote rollicked on last week with a 15-1 record straight-up (our only miss the Dolphins!) and 9-7 against the spread. We're now at .710 overall and .588 ATS entering this final weekend of the regular season. Last week continued our run of Upset of the Week bull’s-eyes with Ravens winning at Chargers, and we nailed two other outright upsets with Seahawks over Chiefs and Raiders over Broncos. Also had a trio of ‘dogs-with-points covering in Redskins, Bengals and Giants. Now, ahead: Four Dolphins-Bills pick, Game of the Week, upsets and all the rest, visit Week  17 Gems for all of our latest selections. 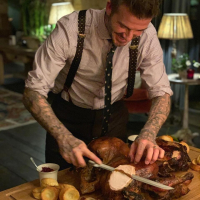 "DEAR GREG...": "Your blog's OK but would be  much better if occasionally you would show a photo of Miami MLS boss David Beckham back home in England carving a Christmas turkey. Thank you.: Dear Reader: Great idea, but how am I gonna get such a picture?

Select other recent columns: Diaz Leaving Is Biggest Canes Loss Of Richt Era / Tannehill's Litmus Test Is Pass or Fail / Oh What We Had, And What We Lost / Wade's World Bigger Than Hoops, And Good For Him / Honeymoon Over: How Collapsing Seasons Put Heat on Gase, Richt / NASCAR Needs A Next Big Thing / No More Excuses, Florida Panthers / To The Good-Guy Grinder In The Shades / Time to Flip the Old Narrative On Miami As a Sports Town / Can Riley Rescue Heat From Purgatory? / When 3 World Cup Legends Were Ours.