1) It's THURSDAY, DECEMBER 20. Go here for the sharp fall in the latest Dolfan Satisfaction Meter postgame results. 2) Football is nearing its crescendo and the holidays are upon us. That means it's the perfect time to delight Dolfans you know with the gift of our 'Fins At 50' book. Check it out on Amazon. 3) In The Previous Blogpost (ITPB): Dolphins get crushed in Minnesota with DSM poll, Hot Button Top 10 & more. 4) Join us on Twitter @gregcote. Also Facebook and Instagram.

Recent stuff from me: Diaz Leaving Is Biggest Canes Loss Of Richt Era, on abrupt departure of defensive coordinator Manny Diaz to be Temple's head coach. And How Miami-Based ESPN Star Dan LeBatard Is Growing His Empire Again. 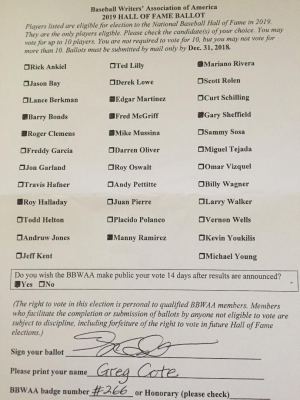 REVEALED! MY 2019 BASEBALL HALL OF FAME BALLOT: I am a proud BBWAA member and Baseball Hall of Fame voter, despite the Le Batard Show's efforts to make fun. This is (I think) my fourth year as a voter, and I take it seriously. Men's legacies are at stake. Players 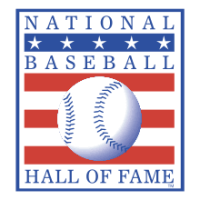 take Cooperstown seriously, and so do it. My latest ballot is pictured. Hopefully it is readable. If not, licking on it will enlarge the image. I voted for nine players (the maximum allowed is 10). Last year four of the players I voted for got inducted. This year my nine votes go to five returning-eligible players I also voted for last year (Barry, Bonds, Roger Clemens, Edgar Martinez, Manny Ramirez and Gary Sheffield); two first-time-eligible guys (Roy Halladay and Mariano Rivera); and two players on the ballot before who got my vote this time (Fred McGriff and Mike Mussina). There were near-misses; Todd Helton was one. For the record, Rivera, the great Yankees reliever, is the only player I'd consider a mortal lock for Cooperstown when results are announced on Jan. 22. A few others could be close in either direction. We'd discussed on the LeBatard Show my support for Juan Pierre, who I think had a very good and underrated career. Upon further research, though, I could not in good conscience vote for a player who didn't make a single all-star team. Sorry, Juan!

takes Week 15 honors with a 41.70-point game (season's lowest winning week) while Chief Patrick Mahomes maintains his overall No. 1 spot in the Miami Herald's NFL quarterback rankings. Dolphin Ryan Tannehill suffered an awful enjoyed 3.40-point game but hangs in 29th place. Our rankings are cumulative, but with bye weeks finished the playing field has leveled for the stretch run. This is our 21st season of Passer Success System (PASS) NFL QB rankings. Our formula is simple and unchanged since its inception in 1998, factoring accuracy, yardage, TD-interception ratio and team result. Most major ranking systems such as the NFL's and ESPN's are complicated and percentile based, allowing QBs who miss half a season to still win a title, while our system is cumulative, rewarding players who are consistently productive and avoid injury or benching. The Top 25 table (plus Dolphins) entering Week 16:

NFL WEEK 15 PIX 'N FANTASY RESULTS: GREAT ... AND BAD: Every Tuesday in the blog I update you on how I did the past weekend with my Miami Herald predictions and with my LeBatard Show/League Of Lobos fantasy team. The latest: Herald picks: Great. Again. My magical year continues. We went 11-5 overall this past week and also 11-5 against the spread. We nailed yet another Upset of the Week with Steelers beating Patriots ("Aawwk!"), had a second outright upset with Titans winning at Giants, and bull's-eyed a trio of 'dogs-with-points in Redskins, Eagles and Panthers last night. All in all, maybe our best season ever hits its homestretch! Greg's Lobos: Bad. The Lobos fell to 1-1 in the consolation-bracket playoffs after a 5-8 regular season. Lorenzo Rodriguez had our number, 78 to 66.1, with Deshaun Watson (22.4) the only Lobo who showed up. Nevertheless: #WeAreTheLobos!

HALF THE BEATLES AND A STONE: In his concert last week  in London, Paul McCartney was joined onstage by Ringo Starr and Ron Wood for "Get Back." Old folks like me who actually remember who the hell Ed Sullivan was might enjoy it.