1) It's SUNDAY, NOVEMBER 25. Hope y'all are enjoying your long Thanksgiving Weekend! 2) Football is raging and the holidays are upon us. That means it's the perfect time to delight Dolfans you know with the gift of our 'Fins At 50' book. Check it out on Amazon. 3) In The Previous Blogpost (ITPB): Our Thanksgiving thank-yous, NFL Week 12 and Turkey Day picks & more. 4) Join us on Twitter @gregcote. Also Facebook and Instagram.

New column: Tannehill has 6 games to earn his Miami future: Dolphins QB Ryan Tannehill returns Sunday at Indianapolis from his latest injury, with Miami at 5-5 likely needing at least four wins in the final six games to make the playoffs. This is Tannehill's Litmus test. No excuses. He must stay healthy, and perform like the highly paid, top-10-drafted passer he is. This is my latest column. Visit Tannehill's Litmus Test Is Pass or Fail.

Other select recent columns: On LeBron's return to Miami with Lakers: Oh What We Had, And What We Lost. Also: Latest NFL picks: Week 12 Gems. And NASCAR Needs A Next Big Thing. Wade's World Bigger Than Hoops, And Good For Him. Honeymoon Over: How Collapsing Seasons Put Heat on Gase, Richt.

CANESFAN SATISFACTION METER: G12: 32.7%: Results are certified in the latest Canesfan Satisfaction Meter postgame poll, and they show 32.7 percent overall approval -- the combination of "very" and "somewhat" satisfied votes -- in the wake of Saturday's 24-3 Miami victory over Pitt putting Miami's final regular season record at 7-5 overall and 4-4 in the ACC. The CSM is your invitation after every Canes football game -- no matter the result or opponent -- to vote on your overall satisfaction with the team and season in a continuing weekly gauge of how UM football fans are feeling. Criteria for voting is your own, but I suggest you consider the most recent game's performance and caliber of opponent, the season as a whole, the program's direction and your overall degree of optimism -- all in the context of reasonable expectations. Results are certified official the morning after one full day of voting. In this case that was around 8:30 a.m. today/Monday. (The CSM also takes place on my Twitter site @gregcote. The approval rate there was 25%).

G12: HURRICANES 24, NO. 24 PITTSBURGH 3: UM DELIVERS PAYBACK WITH HUGE DEFENSIVE SHOW: Postgame thoughts: A somewhat insane game. Miami mostly struggled early on offense -- especially in what turned out to be a comfortable win. N'Kosi Perry was pretty awful, going 6-for-24 for 52 yards. The total offense was 345 yards, but 148 yards of that came on three runs by Travis Homer. Great defense and DeeJay Dallas' 65-yard punt-return TD sparked UM in addition to Homer's 64-yard scoring run. The defense won this game, primarily. The good news? Canes finish a 7-5 season strong with two straight wins. The bad news (beyond this being a season of overall regression for the program)? The offense is still sputtering. Perry's proving is not complete. Miami will carry that into its bowl game, and likely into next season. Oh and by the way, Pitt is exposed as a thoroughly fraudulent rep in the ACC Championship Game. Clemson will name its score. The betting line should be 30 ..... 4Q: UM 24-3 on Dallas 3-yard scoring run. Game over. Rout on. Bowl next ..... 3Q: Canes' Davis loses fumble late in quarter ... UM 17-3 on Homer 64-yard TD run ... Pitt 3-10 on 40-yard FG abetted by pass interference penalty against UM ..... Halftime thoughts: At 10-0 at half, Miami's offense has done nada, with Perry 4-for-18 for 27 yards. But UM's defense has dominated, holding Pitt to 115 net yards, and a Dallas punt-return score gives the Canes their cushion ..... 2Q: Miami turnover. Homer loses fumble near midfield ... UM 10-0 on Dallas 65-yard punt-return TD. Score first was negated by illegal-block penalty but call was (properly) reversed. Was perfect block by Homer ..... 1Q: Perry struggling early (2-for-10, 18 yards) but defense enough to carry UM in opening quarter .... Canes' Bandy recovers fumble caused by Joghnson ... UM 3-0 on Baxa 37-yard FG after drive led by Homer's 47-yard run ..... Original post: Is it payback time (of sorts) for the Miami Hurricanes? We'll see in today's UM regular season finale at The Rock, a 3:30 kickoff on ESPN that will be the last home game for Canes seniors. Last season Miami was 10-0 and ranked No. 2 before a stunning 24-14 upset loss at Pitt sent The U's season crashing to three straight losses. "That game hurt," said Jaquan Johnson, one of UM's seniors. One year later -- exactly, to  the day -- it is Pitt, not UM, riding high entering this game and bound for the ACC Championship Game while Miami is headed for a middling bowl game. (Quick Lane Bowl in Detroit? Independence in Shreveport?) So now it is Miami in the spoiler role. The (barely) ranked Panthers are 7-4 to Miami's 6-5, but the Canes are big 5-point home favorites. I say big because it indicates bettors think Miami is the better team beyond the home-field edge. (That's questionable, and to be determined). Even after a slump-ending win at Virginia Tech, it has been a tough week for Mark Richt's Canes. First a top quarterback prospect canceled his visit to Miami, then dynamic receiver Jeff Thomas abruptly left the program in frustration. Another worry for Richt should be that Pitt arrives hot, on a four-game win streak, and with an offense averaging 247 rushing yards a game. On the other side, QB N'Kosi Perry will start a third straight for UM. "He's getting better and more and more confident," says Richt. "There were times where he missed a guy here and there [last week], but he managed the game well. You could just see his comfort level rising. One day, I believe you'll see him really come into a zone." Pitt challenges Perry with a defense that is closer to average than great, although Dan Marino's alma mater averages 2 1/2 sacks a game and is facing a shaky Miami offensive line. If the line protects Perry and he avoids turnovers, Miami should win at home, though I'd hedge by leaning to Pitt getting this many points. My pick: Hurricanes, 27-24.

OTHER STATE COLLBALL: There are seven FBS-level college teams in Florida. Here's chronological Week 13 schedule for the rest (all Saturday unless noted):

No. 11 Florida (9-3) beats FSU (5-7), 41-14: Gators, playing for poll 'n bowl position, were 8-point favorites at The Doak, with rival 'Noles taking their last shot at bowl-eligibility. It was the better team vs. home field and incentive. The better team won. And FSU sees its first losing season since 1976. It was a good run, Tally. 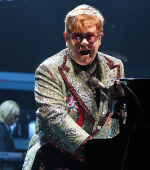 ELTON DELIVERS POWERHOUSE PERFORMANCE IN SUNRISE FAREWELL: We saw Elton John last night at the sold-out, filled to the rafters Panthers' arena in Sunrise as part of his continuing marathon farewell tour. The 2 1/2-hour show lived up to, and exceeded, expectations. The thought that kept occurring: This man is too good to retire. I don't care his age (71). Or that he sometimes seems that age when he is up from his piano and tottering around the stage. When he is seated before his keys, the years disappear. His playing is the best there ever was. His voice (save for the lost highest notes) remains robustly strong. His catalog of hits is top-tier in the history of pop music. The show is all hits augmented by a sprinkling of deep-album cuts such as "All the Young Girls Love Alive." A career retrospective on the giant video screen enhances the performance. I'm a lifelong fan (and admirer of his generosity and philanthropy) who has seen him in concert too many times to count. If you have not, your chances are running out, and you will have missed something special, and irreplaceable.

Select other recent columns: Dolfans, Your Team Is Not Easy To Love. No More Excuses, Florida Panthers. NFL 2018 Team Rankings. Dolphins? Heat? Nope. UM Football Owns This Town. To The Good-Guy Grinder In The Shades. Time to Flip the Old Narrative On Miami As a Sports Town. Can Riley Rescue Heat From Purgatory? When 3 World Cup Legends Were Ours.