1) It's MONDAY, OCTOBER 1. Happy new month, y'all. Welcome to autumn. Can't stop the holidays now. 2) Football's back and that means it's the perfect time to delight the Dolfans in your life with our 'Fins At 50' book. Check it out here on Amazon. 3) In The Previous Blogpost (ITPB): Canes clobber North Carolina with CSM poll, Dolphins' Moment Of Truth, NFL Week 4 pix & more. 4) Join us on Twitter @gregcote. Also Facebook and Instagram.

Most recent columns: Dolphins, Canes, Heat: Unbeaten Miami could have staked its claim to a power shift in the AFC East. Oh well. My column is on how this loomed as a defining moment in modern Fins history: For The Dolphins, The Moment Of Truth Is Here. Also: Finding Great QB is Now Richt's Holy Grail. And With All D.Wade Has Meant, One Year to Say Goodbye Might Not Be Enough.

DOLFAN SATISFACTION METER: G4: 17.2%: Results are certified in the latest Dolfan Satisfaction Meter postgame poll, and they show a steep dip to 17.2 percent overall approval -- the combination of "very" and "somewhat" satisfied votes -- in the wake of Sunday

afternoon's 38-7 road loss at New England putting Miami's season record at 3-1. The DSM is a continuous weekly gauge of how Dolfans are feeling about the team and its direction. Right after each game I invite you to share your overall degree of satisfaction. Criteria for voting is your own, but I suggest fans consider the most recent game's performance and caliber of opponent, season as a whole, direction the club is heading and your overall degree of optimism -- all in the context of reasonable expectations. Results are certified official the morning after one full day of voting. In this case that was around 7 a.m. today/Tuesday. (The DSM also takes place on our Twitter site @gregcote. The approval vote there was 32%).

G4: NEW ENGLAND 38, DOLPHINS 7: IT WAS A MOMENT OF TRUTH GAME, AND MIAMI WAS A NO-SHOW: Postgame thoughts: Everything stunk for Miami on Sunday. Ryan Tannehill was lousy (replaced late by Brock Osweiler). The running game couldn't run. The defense couldn't stop (or pressure) Tom Brady, or stop the Pats run. Miami kept killing itself with penalties, and got dominated in time of possession. It was a thorough humbling, an embarrassing comeuppance, for a Fins team that brought a 3-0 record to Foxboro with dreams of a power shift in the AFC East. The Dolphins came looking to make a statement and got steamrolled instead. Moving forward? A 3-1 mark is still a nice place to be. This can still be a playoff season. Sunday was a slap in the face, though. A needed one, perhaps? Original post: I wrote in this preview column that winning in Foxboro on Sunday would be a defining moment in recent 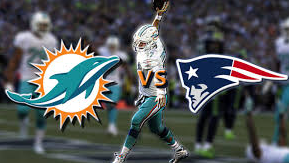 Dolphins franchise history, and why. Now I'm here to tell you it's going to happen. I have drawn a deep swig of the Kool-Aid and gulped it down with gusto. Perhaps by mid-afternoon Sunday there will be signs I have drank poison, but, for now, it is pure ambrosia — the nectar of the gods! I believe the Dolphins will be the best team on this field starting at 1 p.m. I believe that the Patriots’ shortcomings (especially on defense) are real. And I believe the combination will see Miami finally beating Tom Brady in Foxboro. Yes, I get why most would think otherwise. I get all the disclaimers that have New England a 7-point favorite. Miami is 0-14 at Gillette in games Brady starts. The Fins have lost nine consecutive away games in this series (the last win over Matt Cassel) by an average f 18.4 points. The 1-2 Pats haven’t lost three in a row since 2002, and have won their last eight in a row at home. Yes, the Patriots, home and desperate, are a dangerous thing, and the Fins are 3-0 vs. a less-than-ferocious schedule. I get all that! But this I know, too: Ryan Tannehill has been in command and excellent, not just good. The Dolphins offense possesses a quick-strike, chunk-play element not seen in years. Adam Gase’s trick plays have been a delight. Ex-Pat Danny Amendola will be a strong fantasy play. And the big-playmaking defense has been a huge surprise. I’m not saying that when you say Miami, you’re talkin’ Super Bowl. But this is a playoff-contending team with all cylinders pumping, a Dolphins team catching Brady at just the right time for a damned change. My pick: Upset! Dolphins, 30-24.

Visit Week 4 Gems for all of out latest NFL predictions. And watch for latest Dolfan Satisfaction Meter postgame poll, right here and also on my Twitter feed, right after Sunday's game ends.

1. DOLPHINS: The day Miami failed to rise to its Moment Of Truth: The Dolphins are now 0-15 against nemesis New England in Foxboro in games that Tom Brady starts, after Sunday's 38-7 shellacking. If this was Miami staking its claim to a power shift in the AFC East at long last, it failed spectacularly.

2. HURRICANES: UM routs North Carolina as QB audition continues: Canes dominated North Carolina 47-10 at home Thursday night as redshirt-freshman N'Kosi Perry made his first career start in place of Malik Rosier. With a visit by FSU on deck, Mark Richt has a decision to make. Or has he already made it?

4. MLB: Finally! Baseball playoffs are on deck: Two NL tiebeakers for the division title take place today before the wild-card games go on Tuesday and Wednesday nights, followed by the NL and AL Division Series. Football's on and basketball's close, but let's give baseball a couple of weeks to grab us, shall we?

5. GOLF: Europe drubs Team USA in Ryder Cup: The best American players and the finest from Europe ended three days of competition Sunday on a course just outside Paris, with Europe in command and victorious. The U.S. roster? It consisted of, well, Tiger Woods & 17 Other Guys, none of them good enough.

6. MARLINS: Fish wrap up first year of Jeter era on Sunday: For Miami the long season ended Sunday at the Mets, the rebuilt Marlins team avoiding 100 losses, at least. Trading away Giancarlo Stanton, Christian Yelich and Marcell Ozuna took the toll you'd expect. Now it's up to Derek Jeter to deliver signs of progress.

8. URBAN MEYER: Ohio State coach back with a bang: Meyer returned unrepentant from suspension to see his No. 4 Buckeyes win at No. 9 Penn State 27-26 in the maybe the college Game of the Year Saturday night, and everybody on the planet Earth outside of Columbus, O., was hoping Urban would get his a-- kicked.

9. GATORS: Florida should be poll-bound: Gators' big defensive road win at No. 23 Mississippi State, 13-6, should have Florida back in Top 25 in new polls.

Missing the HB10 cut: David Beckham, president of new MLS team Inter Miami, is still fighting a speeding ticket he got in London last January for going 59 in a 40. Um, can we start a GoFundMe page to pay the fine? ..... Headlines I Never Thought I'd See (one in a series): 'GoPro Captures Seal Slapping Kayaker With Octopus' ..... HBO will no longer televise boxing after 45 years. Howard Cosell is spinning in his grave. Unless he was cremated ..... Update. Countdown now 2,822 days (give or take) until Miami hosts its first match in the 2026 World Cup.

Other select recent columns: Why Drake/Gore Will Work, And Why That's Crucial to Fins. Soft Stretch In Schedule Is About Improving At QB. NFL 2018 Team Rankings. Dolphins? Heat? Nope. UM Football Owns This Town. NFL Enters Year 3 Of Anthem-Protest Quagmire. To The Good-Guy Grinder In The Shades. Time to Flip the Old Narrative On Miami As a Sports Town. Can Riley Rescue Heat From Purgatory? When 3 World Cup Legends Were Ours.