Canesfan Satisfaction Meter: 84.0%; plus UM handles FIU 31-17 as N'Kosi Perry comes off bench to star. Our thoughts on UM's QB situation: also, why Dolphins will beat Raiders and rest of our NFL Week 3 predictions & more

1) It's SATURDAY, SEPTEMBER 22. Football's back! That makes this the perfect time to delight the Dolfans in your life with the surprise of our 'Fins At 50' book. Check it out here on Amazon. 2) In The Previous Blogpost (ITPB): Herald NFL Week 2 QB Rankings, Pix 'n Fantasy results, Cote's State of the State, Marlins Man, the real FitzMagic & more. 3) Join us on Twitter @gregcote. Also Facebook and Instagram.

Personal update: As many know from following me on Twitter, I had recent thoracic surgery to remove a tumor from my chest and am in recovery mode. I'm on pain meds and on rest and no-drive orders this week. That's why I've cut back on a bunch of stuff such as a temporary reduction in Herald workload, no LeBatard Show and so forth. Thanks for the understanding. Hope to be back at it starting Monday.

CANESFAN SATISFACTION METER: G4: 84.0%: Results are certified in the latest Canesfan Satisfaction Meter postgame poll, and they show a season-best 84.0 percent overall approval -- the combination of "very" and "somewhat" satisfied votes -- in the wake of Saturday's 31-17 home victory over FIU putting No. 21 UM's season record at 3-1. The CSM is your invitation after every Canes football game -- no matter the result or opponent -- to vote on your overall satisfaction with the team and season in a continuing weekly gauge of how UM football fans are feeling. Criteria for voting is your own, but I suggest you consider the most recent game's performance and caliber of opponent, the season as a whole, the program's direction and your overall degree of optimism -- all in the context of reasonable expectations. Results are certified official the morning after one full day of voting. In this case that was around 8 a.m. today/Monday. (The CSM also takes place on my Twitter site @gregcote. The vote there showed 51% overall approval). 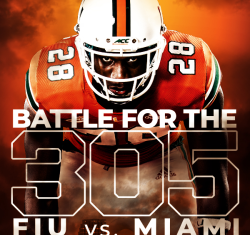 G4: NO. 21 HURRICANES (3-1) BEAT FIU (2-2), 31-17: Final: Miami, 31-17. Synopsis: On the day UM honored its 1983 championship team, the men who set the template, Miami may have found its next quarterback. N'Kosi Perry was pretty great Saturday in the 31-17 rout of FIU, replacing Malik Rosier with the game scoreless and taking impressive charge (17-25, 224 yards, 3 TDs), one interception his only blemish. I say rout because the final score does not reflect the lopsidedness. Miami never trailed and was never in jeopardy. But! This was FIU for Perry, a game where the idea of losing was no real concern. This coming Thursday night in prime time vs. North Carolina -- the season's ACC opener -- will tell more about The U's QB situation than Saturday did. The Tar Heels are not great, but, unlike FIU, they are a team UM's size. A fair fight. A challenge. Who starts that game at QB for Miami -- and how he performs -- will shape Mark Richt's ultimate decision more than what we just saw ..... 3Q: Miami, 31-0. Synopsis: An even bigger mismatch than imagined, but the story of the game is N'Kosi Perry replacing Malik Rosier and QB and lighting it up, although his third-quarter interception was a youthful mistake ..... Half: Miami, 24-0. Synopsis: Score doesn't show it even show UM's utter dominance. FIU has no shot, cannot move the ball (13 total net yards) on this Canes defense. N'Kosi Perry is 12-for-13 for 170 yards, two TD passes and all four scoring drives in relief of Malik Rosier. Mark Richt has himself a decision to make moving forward. Or, maybe it's already made? .....  1Q: Miami, 7-0. Synopsis: N'Kosi Perry in at QB for Malik Rosier is the news. Perry looks sharp. Travis Homer 35-yard TD for the score. Earlier 78-yard Jeff Thomas punt-return TD negated by penalty. FIU offense doing nothing. Miami in charge ..... I'll be semi-live blogging here throughout today's game, with up-to-the-minute scoring updates plus quick thoughts after every quarter ..... Original post: Here we go today/Saturday at 3:30 at Hard Rock, in front of ESPN2 cameras, the Hurricanes coming off a solid win at Toledo that failed to move them up in the polls, and crosstown neighbor FIU having hung 63 points on UMass and (as always) looking for respect. Emotion frames the matchup, of course, because so many players on either team grew up friends in

Miami, and mostly because of what happened when they met 12 years ago, in the 2006 season. BRAAAWWWLLL!!! Both benches emptied, a melee ensued, eight Panthers and five Canes were ejected, and 31 players from both teams were later suspended. Both coaches (Larry Coker, Don Strock) would lose their jobs after that season. The Backyard Brawl obviously was not the sole reason, but it was a shared embarrassment that helped shelve the natural rivalry as a regular series. UM won the brawlgame 35-0. The schools met the next season without incident, Miami winning 23-9. Today is the schools' first meeting since, the first in 11 years and only the third ever. Nobody anticipates an ugly reprise of '06. Said UM coach Mark Richt: "There will be guys getting their blood pumping. But I don't really anticipate anything foolish. I've not mentioned one thing [about the '06 brawl]to our guys." Second-year FIU coach Butch Davis, formerly with UM, of course, recruited the players who would win the 2001 national championship (Miami's most recent), but has a long way to go to hoist FIU onto a competitive par with UM. As we'll likely see Saturday. My pick: Hurricanes, 41-20.

OTHER STATE COLLBALL: There are seven FBS-level college teams in Florida. With Saturday's Miami-FIU game previewed above, here's chronological Week 4 schedule for the rest:

FSU (2-2) beats Northern Illinois (1-3), 37-19: Most recent years this would have been a walkover for Seminoles, but now-struggling FSU was a rather modest 9 1/2-point home favorite as new coach Willie Taggert bought an ounce of patience.

UPSET BIRD DAY IN AMERICA!: DOLPHINS-RAIDERS AND ALL THE REST OF OUR NFL WEEK 3 PICKS: The Dolphins are going to defend The Rock and beat the Raiders here Sunday to forge a 3-0 start for only the fourth time since 1998. I explain why at the top of my latest NFL predictions. They include my Game of the Week, Upset of the Week ("Aaawwwk!") and all of the rest. Our 28th season of Friday NFL picks (online Thursdays) is off to a solid start. We were a stout 20-10-1 overall and more importantly a strong 19-12-1 against the spread entering Week 3. Now let's keep it going! Dive into Week 3 Gems for all of my latest picks. (Included within is a separate link to Thursday night's Jets-Browns pick, or find it directly at Week 3 Thursday Gem. Got off to another win-win start to our new week, only one point off a rare Exacto on the final score. Thank you, Baker Mayfield!) Pictured at right, our "How the Darts Landed" shield, the bull's-eye representing the height of giddy optimism.

Select recent columns: Give Dwyane Time And He'll Make Right Call. Why Drake/Gore Will Work, And Why That's Crucial to Fins. Somehow, Dolphins Make A 7-Hour Wait Worth It. Soft Stretch In Schedule Is About Improving At QB. NFL 2018 Team Rankings. Dolphins? Heat? Nope. UM Football Owns This Town. NFL Enters Year 3 Of Anthem-Protest Quagmire. To The Good-Guy Grinder In The Shades. Time to Flip the Old Narrative On Miami As a Sports Town. Can Riley Rescue Heat From Purgatory? When 3 World Cup Legends Were Ours.