« The new Hot Button Top 10: Football in top spot, but see which team and what else falls where; plus our latest columns, your Dwyane Wade verdict, 4-Man Outfield (updated) & more | Main | On holiday until August 20; plus Dolphins drop preseason opener, sharing news about my health scare & more »

1) It's WEDNESDAY, AUGUST 8. Football's back so it's the perfect time to delight the Dolfans in your life with the surprise of our 'Fins At 50' book. Check it out here on Amazon. 2) In The Previous Blogpost (ITPB): Hot Button Top 10, your verdict on Dwyane Wade's next move, 4-Man Outfield & more. 3) Join us on Twitter @gregcote. Also Facebook and Instagram.

Personal note: On radio, vacation: I am on vacation this week and next so you'll see less of me in the newspaper (online and print), although I'll still be tending to this blog regularly. I'll not be on the LeBatard Show on ESPN Radio these two Tuesdays (yesterday or next week) before returning. Meantime here are my two most recent columns. Click on NFL Enters Year 3 Of Anthem-Protest Quagmire and Gore Back In Miami Is The Perfect End Run. One is on Roger Goodell's cluelessness, and the other is a feelgoodie on ex-Cane Frank Gore back in the 3-0-5 for first time in 14 years.

ONE HURRICANE MAKES COLLEGE  FOOTBALL TOP  50: Better than nothing, I suppose. One Miami Hurricanes makes ESPN's new Top 50 ranking of the best players in college football entering the 2018 season. Unsurprisingly, it's inside linebacker Shaq Quarterman, the tackle machine, who makes it at No. 48. Quarterman (pictured) figures as the figurative and literal center of what should be a formidable UM defense. Four other state-college players make it: No. 20 UCF quarterback McKenzie Milton, No. 21 FSU running back Cam Akers, No. 34 FSU cornerback Levonta Taylor and No. 50 FAU running back Devin Singletary. Click here for the full story and top-50 list. 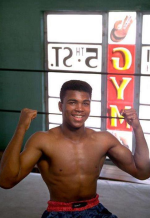 ALI (THEN STILL CASSIUS CLAY) in MIAMI BEACH AT AGE 19: Saw this photo on Pinterest. Unfortunately there was no credit given to a photographer, but clearly it was taken at the original 5th Street Gym on Miami Beach, reportedly in 1961 when the then-still Cassius Clay would have been 19. Clay would change his name to Muhammad Ali three years later. Notice the spanking clean signage and what appears to be a freshly painted wall. That's a far cry from the dingy, dilapidated charm the place would take on before the building at last was demolished in 1993.

DOLPHINS' TANNEHILL 24TH IN NEW QB RANKING: From Pro Football Focus, for what it's worth, comes a new ranking of all 32 expected starting quarterbacks entering the '18 season, and Miami's Ryan Tannehill (pictured) checks in a rather disrespected No. 24. Old man Tom Brady of the Patriots is No. 1, but the other two QBs in the AFC East form the list's caboose: the Jets' Josh McCown 31st and the Bills' A.J. McCarron 32nd.

Other recent columns: Dolphins Need a Better Tannehill, Not Just A Healthy One, on start of training camp, and To The Good-Guy Grinder In The Shades, on the death of Tony Sparano. Also: Dolphins Results Will Exceed Brutal Offseason. Soccer Stadium Progress, But Much Work Left. Reasons For Hope As Jeter Plan Takes Root. Time to Flip the Old Narrative On Miami As a Sports Town. Can Riley Rescue Heat From Purgatory? When 3 World Cup Legends Were Ours.