« World Cup rooting interest: Which of final 8 teams (now 6, soon 4) do you hope wins it all? Poll. Last day to vote!; plus your verdict on LeBron-to-Lakers, the president and the press & more | Main | Delay means fight continues for Beckham's Miami MLS dream. My latest column; plus soccer vs. Melreese poll (last day to vote!), Heat's curious courtship of Carmelo, refreshing World Cup final, newest Back In My Day video (Lawnmowers!) & more »

Latest Hot Button Top 10 (updated): See who's No.1 this week and what else falls where; plus your World Cup rooting-interest verdict, 4-Man Outfield & more

1) It's MONDAY, JULY 9. Surprise the Dolfans in your life. Give them our 'Fins At 50' book. Check it out on Amazon. 2) In The Previous Blogpost (ITPB): World Cup final-8 poll, LeBron to Lakers poll, the president and the press & more. 3) Join us on Twitter @gregcote. Also Facebook and Instagram.

I'm back!: Missed new columns from me lately? It's because I was on vacation last week. I'll be back with a new column later today. Meantime, our most recent columns: LeBron-to-Lakers A Decision Worth Applauding. Our four other columns from the past week: LeBron's 1 Choice to Meet His Legacy Head-On. MLS Miami Says All Are Welcome. 7 Reasons the Dolphins Could Be OK. And Time to Flip the Old Narrative On Miami As a Sports Town). 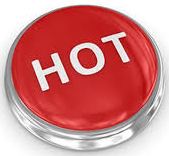 1. WORLD CUP: Unorthodox final four set to go!: It'll be neighbors France vs. Belgium on Tuesday and then England vs. Croatia on Wednesday in World Cup semifinal matches from Russia. No Brazil or anybody else from South America left. No world No. 1 Germany. Italy didn't even qualify. And no surviving team has won it all in at least 20 years. No matter the results from here, the 2018 World Cup will have been nothing if not ... refreshingly different.

2. TENNIS: Top-seed Halep out as Wimbledon reaches midpoint: Unseeded Su-Wei Hsieh stunned No. 1-seed Simona Halelp as the forthnight at Wimbledon bounced to halftime with upsets galore on the women's side. Meantime her nanny revealed that new mom Serena Williams, still in play, missed her baby's first steps while practicing in London. Ouch. Onus now on Serena to win her first post-pregnancy major to make up for the missed milestone.

3. MARLINS: Realmuto an all-star; Fish ready to ride homestand to break: After closing victoriously at Washington Sunday the Marlins have a six-game homestand starting tonight to carry them into the midseason break for the July 17 All-Star Game. Catcher J.T. Realmuto will be the Marlins' lone representative in the ASG, selected as a reserve Sunday evening.

4. DOLPHINS: Low grade for Fins as camp nears: Oy! With Dolphins training camp poised to start in six days with rookies reporting, Miami's offseason is graded a C-minus in an ESPN ranking of how all 32 NFL teams have done. Only two teams (Carolina and Detroit) are graded lower.

5. MLB: All-Stars announced on Sunday: The selection show for the July 17 All-Star Game was last evening on ESPN. No Marlins were voted in, but catcher J.T. Reamuto made it as a reserve. Now comes a few days of baseball writers chewing over their list of top "snubs." (Bor-ring!)

6. NBA: Is LeBron-as-Laker any closer to crown?: LeBron James going to L.A. seemed a huge deal, but then champ Golden State also got better in summer free agency, and now one wonders if LeBron is any closer to what he wants now than he was in Cleveland. The answer may lie in the biggest offseason prize left: Kawhi Leonard. Will the Spurs trade him? And to whom?

7. HEAT: Miami continues in Summer League play: Quiet on the free agency front, the Heat are now 0-2 in the NBA Summer League in Las Vegas after going 2-1 in Sacramento. Miami next faces Utah on Tuesday. Derrick Jones Jr. has been tearin' it up. Um, can we even pretend we really care?

8. NASCAR: Jones survived wreck-o-rama: Erik Jones didn't so much win as survive a wreck-filled race at Daytona for his first NASCAR title. Meantime Brad Keselowski vowed to wreck blockers moving forward. By the time the race finished it felt like there'd been more yellow flags than cars left on the track.

10. THAI RESCUE: Cave rescues begin: The first four boys have been removed from that flooded cave in Thailand. A soccer team and their coach have been trapped. I just bet big that they'll be honored on the ESPY Awards. There's a wager for everything, isn't there!

Missing the HB10 cut: Scandal rocks the Nathan's Hot Dog Eating Contest! Apparently some of the totals were suspect. No wonder. You couldn't pay me enough to judge that mess. I get nauseous just watching ..... The Big3 basketball league is back. Some things you can't stop no matter how hard you try ..... The Tour de France is underway. Gentlemen, start your PEDs? ..... The British Open is in 11 days. You know it's a slow time on the sports calendar when we're counting down to the British Open ..... Update. Countdown now 2,906 days (give or take) until Miami hosts its first match in the 2026 World Cup.

'THE FOUR-MAN OUTFIELD' (UPDATED): WILL BRINSON EVER GET TO .200?: Throughout the MLB season -- just for fun -- I'm comparing and updating the ongoing performances of the three Marlins outfield starters traded away during the offseason and current Marlins center fielder Lewis Brinson, the best prospect to arrive in the deals. Unfair to compare three established stars with a rookie? Boo hoo. Who said life was fair! Plus, remember: Just for fun! We base our rankings on OPS (on-base plus slugging). The updated 4-Man Outfield appears every Sunday and Monday in the blog. The latest: