« Latest Hot Button Top 10 (updated): Dolphins training camp? Wade to China? Soccer? See what's No. 1 and who else falls where; plus our latest column (Fins), your Dolphins anthem-policy verdict, 4-Man Outfield & more | Main | Latest Hot Button Top 10 (updated): Dolphins camp takes on soccer at The Rock for No. 1. See who wins and what else falls where; plus your verdict on Fins win total and Tannehill, 4-Man Outfield & more »

1) It's SATURDAY, JULY 28. Click on Greg Cote Tuesday for this week's best-of LeBatard Show podcast. Contained therein: the new Back In My Day (Eyesight!). Go to my Twitter feed for direct link. 2) Delight the Dolfans in your life with the surprise of our 'Fins At 50' book. Check it out here on Amazon. 3) In The Previous Blogpost (ITPB): Hot Button Top 10, your verdict on Dolphins' new anthem policy, 4-Man Outfield & more. 4) Join us on Twitter @gregcote. Also Facebook and Instagram. 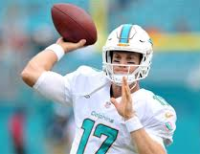 TWO NEW DOLPHINS POLLS -- ON EXPECTATIONS, TANNEHILL -- AS TRAINING CAMP BEGINS: The NFL offseason segues into the preseason as teams start training camp, and Miami's first full practice was Thursday. So football's back! Sort of. And so it quarterback Ryan Tannehill, healthy again after missing the past

20 games in a row dating to late 2016 due to knee injuries. The Fins are pegging their improvement over last year's 6-10 record largely on Tannehill's return. But as I write in my latest column previewing training camp, Miami needs a new and improved Tannehill. Miami needs him to be what he has not been thus far in his pro career: A difference-maker able to lift a team and put it on his shoulders. To read that latest column, click Dolphins Need a Better Tannehill, Not Just A Healthy One. Our two polls below invite you to set the early expectations for this Dolphins season -- what you honestly expect or would bet on, not what you hope for -- and also to weigh in on your confidence level in Tannehill as he enters his seventh NFL season. Granted both answers could change over the next month-plus, but let's get a quick Dolfan pulse-read as training camp begins. Both polls await you. Vote now!

REMEMBERING TONY SPARANO, 1961-2018: The Dolphins' head coach in 2008-11, Tony Sparano passed away unexpectedly on Sunday at age 56 at his Eden Prairie, Minn. home, days from beginning his third season as Vikings offensive line coach. To read my column on Tony, click To The Good-Guy Grinder In The Shades. The Dolphins have had 12 head coaches (including interim guys), and Sparano is only the second to pass away, following inaugural expansion-era coach George Wilson, who died at age 64 in 1978. Sparano coached 61 games with Miami. Only Don Shula (obviously), Dave Wannstedt (73) and Jimmy Johnson (64) had longer tenures. Sparano will be remembered for leading the turnaround from a 1-15 season to 11-5, for bringing the Wildcat formation back into NFL vogue and, ultimately, for being disrespected by owner Stephen Ross, who flew west to woo Jim Harbaugh with Sparano still on the job. He also will be remembered for constantly being mistakenly called Tony Soprano and for wearing sunglasses indoors at at night -- not to look cool, but due to an eye condition. I find it interesting to note Sparano's career winning percentage with the Dolphins was .4754 and that the coaches since him are a combined .4747. If Sparano didn't prove to be the answer, well, they're still looking. Sparano may have been a better assistant than a head coach when all was said and done, but he was a quality football man and a good guy. R.I.P.

Other recent columns: Dolphins Results Will Exceed Brutal Offseason. Soccer Stadium Progress, But Much Work Left. Reasons For Hope As Jeter Plan Takes Root. Time to Flip the Old Narrative On Miami As a Sports Town. Can Riley Rescue Heat From Purgatory? When 3 World Cup Legends Were Ours. Tannehill's Defining Season.

ESPN SAYS HEAT IS BARELY A PLAYOFF TEAM NOW: The Worldwide Leader's new NBA Power Rankings are out, notably including the impact of LeBron-to-Lakers and Kawhi-to Raptors. The top five: Warriors, Celtics, Rockets, 76ers, Raptors. Miami is slotted 20th overall and seventh in the East, after the aforementioned three plus Pacers, Wizards and Bucks. Heat was a sixth seed last season but has idled through a whisper-quiet offseason borne of little cap space for free agents and even less interest by potential trade partners for, say, Hassan Whiteside.

THE LIST: DOLPHINS HEAD COACHES BY TENURE: Miami has had nine full-time head coaches. Their rank by tenure based on total regular-season games: