7 reasons why the Dolphins may surprise doubters. New column; plus get off Miami's back! In defense of us as a sports town; also, latest Back In My Day video (License Plates!), Greg Norman wearing nuthin' but a hat & more

1) It's THURSDAY, JUNE 28. A Facebook friend passed along the photo at right, and I share it as a public service in a continuing effort to save the print version of the American newspaper. Because what better way to remind people to ready a classic newspaper than by wearing form-hugging newsprint pants! 2) Delight the Dolfans in your life with the perfect anytime-gift: our 'Fins At 50' book. Their reaction is sure to be: "Wait. Greg Cote wrote a BOOK!?" Click on Amazon to check it out. 3) In The Previous Blogpost (ITPB): Hot Button Top 10, Heat in NBA purgatory, 4-Man Outfield & more. 4) Join us on Twitter @gregcote. Also Facebook and Instagram.

THE 7 VARIABLES THAT COULD UNLOCK A SURPRISING DOLPHINS SEASON: An analysis this week by Pro Football Focus ranked the 32 NFL rosters 1 through 32 based on projected 2018 starting lineups and how those players fared in 2017. The Dolphins were ranked a rather depressing 26th. But that failed to consider seven things that will be different about the Fins this year that were not factored in the ranking. I bring them to you in my latest column. The obvious one is the return from injury of quarterback Ryan Tannehill (pictured). Some of the others may surprise you. Miami needs all or most of them to fall right to surprise doubters and be a playoff contender. To read that latest column, click 7 Reasons the Dolphins Could Be OK.

HEY, YOU! GET OFF MIAMI'S BACK!: "Miami is a lousy sports town!" Yada yada yada. I am so tired of hearing that. It's a lazy, rote generality, a perpetuating myth. It stands on the same old wobbly legs, such as the Dolphins' playoff-win drought, Marlins crowds or the fact Heat fans tend to show up fashionably late. We are bigger than that. The success of our teams and even fan support are only a part of the whole. There are many other factors that should make sports fans who live here feel fortunate to be amid such variety and major events. Our plate is full, and getting fuller. To read this week's column, click Time to Flip the Old Narrative On Miami As a Sports Town.

Other most recent columns: Can Riley Rescue Heat From Purgatory? The Championship Coach Who Got Away. When 3 World Cup Legends Were Ours. Also: Mickelson's Major Breach Deserves Forgiveness. A Deflated World Cup Thanks to no-USA. End the Illogical Shame and Get Howard in the Hall. Jeter Must Restore Faith Before He Can Win. In Search of the Dolphins' Elusive Grand Plan. Tannehill's Defining Season. Heading For Home: An Ode to Jim Morris. 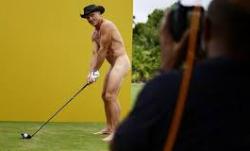 IT'S ESPN'S ANNUAL CELEBRATION OF ATHLETE VANITY!: Now out: ESPN's 10th annual 'Body' issue, in which 16 athletes celebrate their own physiques by agreeing to be photographed tastefully undressed. By tastefully I mean they don't show any bleep or any blank. It is artfully done, I give them that. But it's such an excess of vanity. It's like when teenage girls Tweets out selfies looking their most Kardashian. This is the professional athlete version. LOOK AT MEEE!!! Modesty? What's that!? The fame and attention and applause these athletes get evidently is not enough. I wanted to choose a photo that for me exemplifies the absurdity of the ESPN 'Body' franchise, and so here is 63-year-old golfer Greg Norman being photographed pretending to drive a golf ball, incongruously wearing nothing but a black cowboy hat. "Hello, security? Yes we have reports of a man on the 8th tee box wearing only a cowboy hat. Having said that, he just poked it a good 290 right down the middle! What a swing. And the club, too." Fore!

NEW 'BACK IN MY DAY': LICENSE PLATES!: The new Back In My Day video debuted Tuesday on the LeBatard Show on ESPN Radio. I rail against people who can't figure out the mystery of the license plate registration decal -- how you're supposed to stick this year's decal directly over last year's, not display them separately all over the damned plate. Enjoy. Unless you're one of those decal abusers (see photo), in which case ... be embarrassed.

OUR APSE-HONORED COLUMNS: The Associated Press Sports Editors 2018 writing awards ranked me a Top 10 national sports columnist in the major-outlet category. Thanks, APSE. Here are the nominated columns that earned the honor: At Doral, an annual tradition since 1962 is replaced by silence, and by what's missing  /  Marlins' Jose Fernandez statue is divisive yet has a chance to serve a greater purpose  /  NFL has moral obligation to help Buonicontis and Kiicks while it limits future suffering  /  What led to El Clasico Miami began with Joe Robbie's unlikely, accidental love of soccer  / With 59 home runs, Stanton still had a magic season. Just hope this wasn't goodbye. (For our more recent columns, browse MiamiHerald/GregCote).