1) It's WEDNESDAY, MAY 2. Good to see you again, May. What's it been, a year? 2) Thrill and surprise the Dolfans in your life with our 'Fins At 50' book. Their reaction is sure to be: "Wait. Greg Cote wrote a BOOK!?" Click on Amazon to check it out. 3) In The Previous Blogpost (ITPB): Grade Dolphins draft poll, Hot Button Top 10, The List (Fins' top drafted TD producers), 4-Man Outfield & more. 4) Join us on Twitter @gregcote. Also Facebook and Instagram. 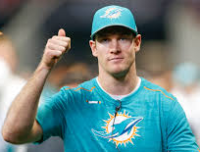 WHERE DOES DOLPHINS' QB SITUATION RANK IN AFC EAST? NEW POLL. VOTE NOW!: The Dolphins' stubborn, dubious devotion to quarterback Ryan Tannehill (pictured) and the hesitance to try to draft his successor is the topic of my latest column. You'd click on The Dolphins' Misplaced Inattention to read it. The premise: In the micro view, Miami had a solid draft; Minkah Fitzpatrick will be really good. But in the macro view, still no future plan at QB, which is sort of important. Another theme of the column: Miami has slid to fourth (last) in the AFC East in terms of its quarterback situation moving forward. The Pats' Tom Brady isn't going anywhere, and now the Jets (Sam Darnold) and Bills (Josh Allen) have new first-round QBs on which to pin their hopes. No guarantee either or both will turn out great, but you have to take shots to score. Meanwhile Miami has a turning 30 QB who in six seasons has not proved to be a difference maker and who now is coming off major knee surgery. I'm not sure if most agree with me, though. Hence, this poll! If you neutral, say, a fan of a team outside the AFC East, which f these four QB situations would you prefer for your team moving forward? The poll is alphabetical by team name. Vote!

THE GODFATHER SPEAKETH!: Pat Riley's annual postseason State of the Heat address is seldom boring, and Monday's did not disappoint. The biggest takeaway for me? "We're stuck with Hassan Whiteside, so we're going to make the best of it." OK, those are not Riley's words, they're mine. But that's what I heard. Whiteside's remaining contract and the role he plays in the changing NBA will make it very difficult for Miami to move him in a trade.So this becomes Riley's new 7-foot project. He admitted Whiteside was not mentally or physically prepared for the playoffs. He also spoke of a rift between Whiteside and coach Erik Spoelstra that Riley himself will get involved in mending. Bottom line? Riley hates the side of Whiteside who is moody and selfish -- everything Heat "culture" is not about. But Riley also thinks Whiteside needs to be a 30-minute man, not the disappearing giant he's become. Stay tuned.

NEW 'BACK IN MY DAY': MATTRESSES!: This debuted during yesterday's LeBatard Show on ESPN Radio and ESPNews. It is one of my personal favorites. I think I've done around 115 or so BIMDs since the bit debuted in 2014. For me, this might be all-time top 10:

'THE FOUR-MAN OUTFIELD' (UPDATED): Throughout the MLB season -- just for fun -- I'm comparing and constantly updating the ongoing performances of the three Marlins outfield starters traded away during the offseason and current Marlins center fielder Lewis Brinson, the best prospect to arrive in the deals. Unfair to compare three established stars with a rookie? Boo hoo. Who said life was fair! Plus, remember: Just for fun! We base our rankings on OPS (on-base plus slugging). The latest, entering Wednesday play:

Our other recent Dolphins-draft columns: Dolphins Needed Boldness But Played It Safe. Solid Contact, No Home Run. And Next Gronk (They Hope) And A Mini-Linebacker.

Our recent Heat playoff-run columns: A Hope-Crushing Defeat. Embiid Shows Up, Whiteside Not So Much. Not Good If Heat Need Wade to Carry Them. Whiteside Must Rise Up Now. In Dolphins vs. Heat, Only One Has Earned Our Trust. And The Rise Of The Underdog Heat.