« Legalized sports betting in Florida: Yay or nay? Poll. Vote now!; plus latest Back in My Day video (Disappearing Jobs!), confessions of a lifelong Dolfan, bold(ish) predictions on LeBron/Tiger/Marlins & more | Main | Latest Hot Button Top 10 (updated): See the surprise at No. 1 and what else falls where; plus links to latest columns, 4-Man Outfield (updated), The List (NBA Game 7s) & more »

1) It's SATURDAY, MAY 19. Happy Wedding Day to Prince Harry and Meghan Markle! Not quite sure why I care about the Royal Family, but strangely I do. 2) Astonish and thrill the Dolfans in your life with our 'Fins At 50' book. Their reaction is sure to be: "Wait. Greg Cote wrote a BOOK!?" Click on Amazon to check it out. 3) In The Previous Blogpost (ITPB): Should Florida legalize sports betting poll, bold(ish) predictions on LeBron/Tiger/Marlins, latest Back In My Day video & more. 4) Join us on Twitter @gregcote. Also Facebook and Instagram. 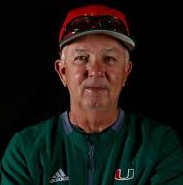 THE LAST (HOME)STAND OF CANES BASEBALL COACH JIM MORRIS: Only Hurricanes baseball legend Ron Fraser and Dolphins icon Don Shula have exceeded Jim Morris' 25 seasons at UM among South Florida's all-time biggest-team coaches (see The List below). Now, weather willing of course, the retiring Morris' final home game is Saturday afternoon vs. Boston College at the campus ballpark. The final home series began Thursday night with a 3-0 UM win and continued Friday with a 4-3 win, making it 10 straight Canes wins to keep alive Miami's hope of making the NCAA Tournament with a record now 27-25. Last season and this one have been a downturn for Canes baseball and Morris. Nevertheless the two-time-champion Morris earned his way out of Fraser's long shadow and stands on his own in UM history, retiring as the fourth-winningest major-school coach in college baseball history. My latest column is an unabashed ode to Morris as he bids farewell. He is the man who would never fill Fraser's -- and yet did. To read the column, click Heading For Home: An Ode to Jim Morris.

Latest column: A solution to Derek Jeter's impatience: The Marlins' boss said this week he is impatient for the team to be a winner. Guess what, Derek? So are Marlins fans! But Jeter's ground-up, farm system reboot is a slow-fix that will test that patience. To accelerate the process and help assure its success Jeter must do something more. It involves spending. And it should center around two names: Re-signing J.T. Realmuto long term, and going after Manny Machado in free agency after this season. To read my latest column, click A Solution To Jeter's Impatience.

Will this NBA playoffs make history?: Golden State and Houston are giants out West. In the East, LeBron is LeBron. For those reasons I believe both conference finals will go the limit to Game 7, which would be the first time that has happened in the NBA since 1979. To read our latest column,  click NBA Rolling A Pair of 7s. Additional most recent columns: Supremes Got It Right On Sports Betting, Confessions of a Lifelong Dolfan, Adam Gase Places His Bets and Crossing the Line On American Sports' Pandering For Foreign Money.

THE LIST: ALL-TIME MOST TENURED SOUTH FLORIDA MAJOR-TEAM COACHES: In the long history of South Florida's biggest teams -- Miami  Dolphins, Miami Heat, Miami Marlins, Florida Panthers and Miami Hurricanes football, basketball and baseball -- here are the only persons to have served at least 10 seasons as head coach. The man third on the list, Jim Morris, coaches his final home game on Saturday:

POLL RESULT: STRONG MAJORITY WANT FLORIDA IN ON LEGALIZED SPORTS BETTING: We asked, "In the wake of this week's Supreme Court ruling, do you hope Florida will be among the states to legalize betting on sports?" And it was 76.81 percent yes, 18.84% no and 4.35% undecided.

For all of our more recent columns, browse MiamiHerald/GregCote.