« G3: Philadelphia 128, @ Heat 108: Embiid shows up, Whiteside doesn't, and Miami down 2-1. With my column from the arena; plus poll verdict in on Whiteside (ouch!); also, Dolphins draft/schedule, Top 50 MLB players, 4-Man Outfield & more | Main | Latest Hot Button Top 10 (updated): Who won the tight battle for No. 1 and what else falls where; plus Heat's hope-crushing defeat (with column), 4-Man Outfield & more »

1) It's SATURDAY, APRIL 21. It's Record Store Day! Explore an indie shop near you. That's me on the right flying the flag of my local haunt. Get your groove on. Vinyl's back, Jack! 2) Best wishes to longtime colleague and fellow columnist Dave George, who retired this week after 40 years at the Palm Beach Post. 3) Surprise and delight the Dolfans in your life with our 'Fins At 50' book. Click on Amazon to check it out. 4) In The Previous Blogpost (ITPB): Heat-Sixers Game 3, your Whiteside verdict (uh oh), Dolphins draft/schedule, MLB Top 50, 4-Man Outfield & more. 5) Join us on Twitter @gregcote. Also Facebook and Instagram.

My Heat Game 4 column: Click on A Hope-Crushing Defeat to read.

Column on Dolphins schedule offering no excuses: Click Schedule Not Daunting, So No More Excuses for my latest column. With Ryan Tannehill back, an offseason of changes that (they think) made them better, and a schedule that is less than daunting, the Fins are out of excuses to not win in 2018.

G4: PHILADELPHIA @ HEAT: SPO ON THE SPOT TODAY IN (REALISTICALLY) A MUST-WIN: I hate saying "must win" casually, when it isn't that literally, but today is everything but for the Heat,

trailing the Sixers 2-1 in this best-of-seven playoff series. Another loss would leave Miami having to win three games in a row -- two of them in Philly. Even a win today still leaves the Heat

disadvantaged, but at least with a fair shot and the assurance of another home game. I say "Spo on the spot" in the headline here because coach Erik Spoelstra must find a way to neutralize the 76ers' clear advantage in overall talent. Joel Embiid and Ben Simmons are the best players in this series, and both so young and athletic. Who can stop Embiid (pictured), the the masked marvel? Spo must find a way to do that, to get Hassan Whiteside involved offensively, which he has been unable to do thus far, and he also must find a way to create much better perimeter defense, considering Philly has sunk 18 three-pointers in both its series wins. All of the pressure is on the home team today. Let's see how they handle it.

Our Heat playoff-run columns: On Thursday's Game 3 home loss: Embiid Shows Up, Whiteside Not So Much. Also: Not Good If Heat Need Wade to Carry Them / Whiteside Must Rise Up Now / In Dolphins vs. Heat, Only One Has Earned Our Trust / And The Rise Of The Underdog Heat. 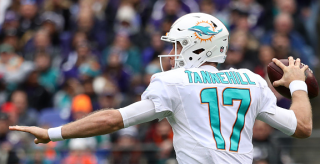 DOLPHINS SCHEDULE SOFT ENOUGH TO WIPE AWAY ALL THE EXCUSES: [Note: An expanded version of this blogpost on Dolphins schedule appears as an online column linked immediately above]. You know what I see when I look at the Miami Dolphins' newly minted 2018 regular-season schedule? I see a last chance for the regime of VP Mike Tannenbaum, GM Chris Grier and coach Adam Gase. At least that's how they should see it. Like an opportunity they should seize as if their Dolphins futures depended on it. This is a schedule that affords a chance for last year's 6-10 team to improve by a few games and be in the playoff hunt. The return of quarterback Ryan Tannehill (pictured) only underlines the notion that there will be no excuses for Miami in 2018. After the season opener, the Fins play nine of their next 10 games against teams not in the playoffs last year. There is a real shot to be in solid postseason shape entering December -- and they'd better be, because the schedule finishes tough. With all but one game at 1 p.m. on a Sunday, our game by game synopsis/outlook, with AFC East games in bold:

G1: Vs. Tennessee Sept. 9 -- Titans made playoffs at 9-7 last year but Dolphins beat them here (16-10) and get home-opener boost. Win likelihood solid.

G7: Vs. Detroit Oct. 21 -- Lions were 9-7 but missed postseason. Another key game a playoff team must take. Win likelihood fair.

G8: @ Houston Oct. 25 -- Texans were 4-12 but will have Deshaun Watson back a huge difference. And this is the Thursday night road game every traveling team hates. Win likelihood slim.

G9: Vs. N.Y. Jets Nov. 4 -- If you can't beat the Stinkin' Jets at home, can you say you deserve the playoffs? Win likelihood solid.

Bye Week. Late. But well-timed for a big closing push?

G11: @ Indianapolis Nov. 25 -- Colts were 4-12 but should have Andrew Luck back for the Frank Gore Bowl. Win likelihood solid.

G12: Vs. Buffalo Dec. 2 -- This begins the schedules' tough closing stretch. Bills were 9-7 and made playoffs, and swept Miami (both close) last year. Win likelihood fair.

G16: @ Buffalo Dec. 30 -- Weather a likely big factor. Tough finish if this is for a playoff spot. Win likelihood slim.

ESPN forecasts a two-game bump to 8-8 for Miami. I have it as five "solid" wins, seven "fair" shots and four "slim" chances. By that reckoning, if Fins go 4-3 in those seven teetering games, that's 9-7 and a (likely) wild-card spot. In any case: No More Excuses!

UPDATED: 'THE FOUR-MAN OUTFIELD': Throughout the MLB season -- just for fun -- I'm comparing and updating the ongoing performances of the three Marlins outfield starters traded away during the offseason and current Marlins center fielder Lewis Brinson, the best prospect to arrive in the deals. Unfair to compare three established stars with a rookie? Boo hoo. Who said life was fair! Plus, remember: Just for fun! We'll base our continually updated rankings on OPS (on-base plus slugging). Brinson has been struggling mightily but came alive with two homers Thursday (his first extra-base hits all years) to raise his OPS from .316 to .456. The latest, entering Saturday play: