G3: Philadelphia 128, @ Heat 108: Embiid shows up, Whiteside doesn't, and Miami down 2-1. With my column from the arena; plus poll verdict in on Whiteside (ouch!); also, Dolphins draft/schedule, Top 50 MLB players, 4-Man Outfield & more

1) It's THURSDAY, APRIL 19. Condolences to Spurs coach Gregg Popovich and family on the death of his wife, Erin, 67, following a long illness. 2) Click on Greg Cote Tuesday for the podcast of this week's LeBatard Show on ESPN Radio. 3) Surprise and delight the Dolfans in your life with our 'Fins At 50' book. Click on Amazon to check it out. 4) In The Previous Blogpost (ITPB): Wade rescues Heat, Whiteside poll, Marlins 29th of 30 in 'legendary,' 4-Man Outfield & more. 5) Join us on Twitter @gregcote. Also Facebook and Instagram.

NEW: COLUMN ON HEAT'S GAME 3 LOSS: Click Embiid Shows Up, Whiteside Not So Much for my column from the arena on Thursday night's 128-108 Game 3 loss creating a 2-1 series hole entering Saturday's Game 4 here.

G3: PHILADELPHIA @ HEAT: GOOD THAT WADE HAS THAT LEFT IN HIM. BETTER IF MIAMI ISN'T COUNTING ON IT: Heat-Sixers NBA first-round playoff series locked 1-1 entering Game 3 back 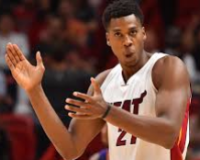 won't. Pretty clearly, the 76ers will need Embiid to challenge for the East crown, but think they can get by without him now and beat Miami anyway. Up to the Heat to prove otherwise. Dwyane Wade carried the Heat off the bench with 28 points in Game 2. As I explore in my latest column (link below), Miami should not rely on its 36-year-old icon to ave the day. Wade at this point in his career should be more luxuruy than necessity. Others must step up, led by Hassan Whiteside (pictured) and Goran Dragic and the bench. Only James Johnson and Kelly Olynyk have distinguished themselves in this series beyond Wade's Game 2. Miami stripped away Philly's home-court advantage but I still consider Sixers the series favorite. Both sides need a win tonight very badly, the beauty of a seven-game series. Our four Heat playoff-run columns thus far:

(*) New: It's good Wade can still do that, but better if they don't need him to: Not Good If Heat Need Wade to Carry Them.

(*) His Heat future is wavering, and two quiet games haven't helped: Whiteside Must Rise Up Now.

(*) With Wade at the hub, Heat keep giving us reasons to care: In Dolphins vs. Heat, Only One Has Earned Our Trust.

(*) And my series prediction, which Wade pulled from the gutter: The Rise Of The Underdog Heat.

POLL RESULT: VERDICT IN ON WHITESIDE (SORRY, HASSAN...): We asked, "What best reflects your opinion of the Heat's Hassan Whiteside?", and of four choices, a majority of 58.53 percent answered, "He's big disappointment relative to salary." Then it was 18.70% for "His skill set does not fir the evolving NBA," 17.89% for "Spoelstra needs to give him more minutes," and 4.88% for "Favorable. No issue. All good. No problem." The two negative options totaled around 77% to the two positive options' 23%. Ouch.

DOLPHINS: PRE-DRAFT PRESS CONFERENCE (HA!), SCHEDULE RELEASE: The NFL insist teams have a pre-draft media session, so the Dolphins did on Wednesday, starring VP Mike Tannenbaum and GM Chris Grier (pictured), the team's Ministers of Draft Non-Information. They'll make the draft decisions with input from coach Adam Gase, and Wednesday the two men spent an hour revealing as little as possible about their intentions. It's Groundhog Day. Every year, reporters dutifully ask questions, team execs dutifully emit banal generalities. Everybody says thanks and leaves. Now, Thursday night comes Part II of the NFL making much ado about very little. The schedule release! It's packaged as prime-time TV now, of course. We already know who all of the Dolphins' opponents will be. Tonight simply sets the order and tells us if there are any prime-time games, yet the NFL says it's big news so the media obediently treats it as such. Teams coming off 6-10 season can't count on any prime-time stages, by the way, although odds are the Fins may get one. Update: And they did get one.

ESPN TOP 50 LIST ANOTHER 'OUCH' FOR MARLINS: ESPN ranks its Top 50 players in MLB right now and it's another reminder why the Marlins are where they are in the NL East. The Washington Nationals place five players in RHP Max Scherzer (4th), OF Bryce Harper (5th), RHP Stephen Strasburg (19th), 3B Anthony Rendon (37th) and SS Trea Turner (46th). There are two New York Mets in RHP Jacob deGrom (32nd) and RHP Noah Syndergaard (34th). There is one Atlanta Brave in 1B Freddie Freeman (25th). No Philadelphia Phillies, but the Phils are rising with the kind of rebuild the Marlins are hoping for and a few years from. The Marlins list shutout is magnified by the facet four ex-Marlins make it: Yanks OF Giancarlo Stanton (13th), Brewers OF Christian Yelich (41st), Cardinals OF Marcell Ozuna (42nd) and Indians RP Andrew Miller (44th).

UPDATED: 'THE FOUR-MAN OUTFIELD': YELICH BACK: Throughout the MLB season -- just for fun -- I'm comparing and updating the ongoing performances of the three Marlins outfield starters traded away during the offseason and current Marlins center fielder Lewis Brinson, the best prospect to arrive in the deals. Unfair to compare three established stars with a rookie? Boo hoo. Who said life was fair! Plus, remember: Just for fun! We'll base our continually updated rankings on OPS (on-base plus slugging). Early days, but all are struggling to varying degrees except Yelich, who is finally back off the disabled list. The latest, entering Thursday play: