« The latest 'Back In My Day' video (Uber!), why this is week Dolphins must begin to find their future & more | Main | Latest Hot Button Top 10 (updated): A new No. 1 not used to being there, and see what else falls where; plus our APSE-winning columns, Miami's Top 25 Sports Figures & more »

1) It's SATURDAY, MARCH 3. Happy to be done with sad February. Welcome, new month! 2) Surprise and delight the Dolfans in your life with our Fins At 50 book. Click on Amazon or Barnes & Noble to check it out. 3) In The Previous Blogpost (ITPB): This is week Dolphins must find their future, latest Back In My Day video (Uber!) & more. 4) Join us on Twitter @gregcote. Also Facebook and Instagram. 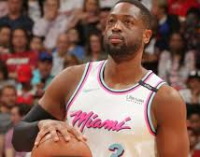 RANKING MIAMI/SOFLA'S 2018 TOP 25 SPORTS FIGURES: I last did one of these in late 2015 and man has a lot changed around here in two-plus years. Does Dwyane Wade hang on to No. 1? Where do newcomers Derek Jeter and David Beckham land? Who's the top Dolphin? You're a click away from all of those answers and many more. For the column and full list, click Top 25 Miami Sports Figures For 2018.

Our most recent other columns:  For One Night: Magic City  /  Fins Must Find Their Future  /  Tiger Still Best Thing In Golf, But Reasons Why Have Changed  /  Jeter's Shameful Decimation Of Marlins Overshadows Season  /  Will You Make The Leap Of Faith The Marlins Are Asking? And our two on the Parkland tragedy: MSD On Their Jerseys, A Community In Their Hearts and Sports Mourns. We All Mourn, Then Wait For The Next Tragedy While Leaders Do Nothing.

THANK YOU, APSE: THREE WAYS I'M GRATEFUL, AND ONE REASON IT DOESN'T MATTER: Yesterday the Associated Press Sports Editors completed its annual contest judging, and look who turned up as Top 10 in column writing. Yep, me. The five columns the Miami Herald entered for me are listed below. I'd like to tell you three reasons why I'm honored by this, and one reason why it doesn't matter:

(*) I'm honored because the APSE awards are to written sports journalism what the Oscars are to actors. It's national. It's the big prize. And in my case, the Miami Herald is in the major-outlet category (over-175,000 circulation), and so our competition is the likes of the New York Times, Boston Globe, USA Today, L.A. Times and ESPN.com. It was me against the giants, so it pleases me to be placed in their company. (By the way, I laughed out loud the first time I saw on Twitter that, in my case, some joked that they thought "over 175,000" was an age category. Funny!).

(*) I'm honored because variety is the thing I like most about my job. I have been a beat writer who covers the same team every day, and, for me, it got boring. Column writing presents me a blank palette, more freedom to roam. I go for variety in my subject matter, and so it was very pleasing to me that of the five 2017 columns chosen by my boss to enter in the contest, none were standard Dolphins/Heat/UM football fare. All were off the beaten path to a degree.

(*) And I'm honored because the columns of mine that got me in the top 10 offer a little bit of a lesson, I think, for the evolving newspaper business, which, in its increasing and understandable emphasis on the digital product over the print product, is increasingly obsessed with writing only stuff that generates a lot of online "clicks," and eliminating subject matter that does not. I think most of my five winning columns were probably not click monsters, but resonated very much with those who did read them. Sometimes, that still needs to be enough.

(*) Now, why it doesn't matter is because of the capriciousness of contests and judging, the randomness of it. I have always believed that about writing awards; now I can say it without it sounding like sour grapes. There is no validation here. I have had better years and better columns, but got lucky that these five happened to resonate with enough judges who liked them. Hundreds of sports writers who've never been handed a plaque are doing good work every year, every day. Keep it up, brothers and sisters, because it's always about readers, not judges.

Thanks to all of our readers, listeners, followers, clickers and thinkers -- especially those loyal long-timers. Now here are the five 2017 columns that happened to win for me:

March 1: At Doral, an annual tradition since 1962 is replaced by silence, and by what's missing.

April 22: Marlins' Jose Fernandez statue is divisive yet has a chance to serve a greater purpose.

May 15: NFL has moral obligation to help Buonicontis and Kiicks while it limits future suffering.

Select additional columns: UM Morally Right, But Will the Force (Majeure) Be With Them? LeBron Wins In Latest Power Play, But So Does Miami. Our Dwyane Wade homecoming trilogy: Only 3 Points, But He Owned The Night / Heat Have Big Plans For Wade 2.0 / Welcome Home, D.Wade. Also: Richt Building Something Big & Something To Last. Dear Canton: Call Zach. Farewell, Rubin. Beckham's Dream Becomes A Team. Appreciating Wayne Huizenga. When Victims Seize The Power. No Way to Escape Her Shame. The Hurricanes Are Back; Deal With It, America. The Godfather Speaks. Wade Will End Where He Belongs. Regret, Tears & a Legacy's Dark Shadow. Specials: Thank You, Mae Riback. Thank You, Edwin Pope.