1) It's SUNDAY, DECEMBER 31. Need one more gift for the Dolfans in your life? Click on Amazon or Barnes & Noble and check out my historical book, Fins At 50. 2) Sorry we haven't had as many general sports columns lately. Been burning a slew of leftover vacation time this month. 3) Watch for our season-ending college State Offensive Player of the Year (SOPY) results following all of the bowl games involving state FBS teams. 4) In The Previous Blogpost (ITPB): NFL Week 17 picks, year-in-review polls advisory & more. 5) Join us on Twitter @gregcote. Also Facebook, Instagram, Periscope and Snapchat.

My Hurricanes bowl-review column and thank you Orange Bowl Committee: Click Where The Swagger Was Born for my latest column on Miami's first Orange Bowl game in 14 years tonight. And thank you, OBC. At Friday's Coaches Luncheon at the Hilton Downtown Miami I was honored to receive the 2017 Edwin Pope Orange Bowl Media Award. Honored because I respect the Orange Bowl Committee's good works and especially because the award is named for my friend, longtime colleague and mentor who passed away last January. Click HERE for the Herald story.

CANESFAN SATISFACTION METER: G13/SEASON FINAL: 68.4%: Results are certified in the latest and season-final Canesfan Satisfaction Meter postgame poll, and they show 68.4 percent overall approval -- the combination of "very" and "somewhat" satisfied votes -- in the wake of Saturday's 34-24 Orange Bowl Game loss by the No. 10 ranked Hurricanes vs. the No. 6 Wisconsin Badgers putting UM's final season record at 10-3. The CSM polls are your invitation after every Canes game to share your overall degree of satisfaction with the team. Criteria for voting is your own, but we suggest you consider the latest performance and caliber of opponent, the season as a whole, the direction of the program and your overall sense of optimism -- all in the context of reasonable expectations. Because this is the final poll, we suggested you give special emphasis to the season as a whole. Poll results are certified official the morning after one full day of voting. In this case that was around 10:30 a.m. today/Monday. 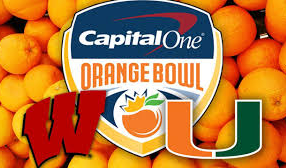 ORANGE BOWL GAME: HURRICANES VS. WISCONSIN: CAN MIAMI RIDE HOME MAGIC TO UPSET WIN?: 4Q: Wisconsin 34-24 ..... Miami 24-27: Badgley 41-yard field goal ..... 3Q: Wisconsin 27-21 ..... Miami 21-24: Cager 38-yard pass from Rosier ..... 2Q: Wisconsin 24-14 ..... Wisconsin 17-14 ..... Wisconsin 10-14 ..... 1Q: Miami 14-3: Dallas 39-yard run ..... Miami 7-3: Homer 5-yard run ..... Wisconsin 3-0 ..... Original post: It's the Big Ten and ACC runnersup tonight in the 84th Orange Bowl game as the No. 6-ranked and 12-1 Wisconsin Badgers face the No. 10 and 10-2 Miami Hurricanes on what is supposed to be a neutral field but of course won't be. Plenty of Wisconsinites in red made the trip, but, still, Hard Rock Stadium is sure to be dominated by Canes fans. Miami is playing in its first hometown bowl game since 2003, while Wisconsin (hard t believe) has never before played in the OB. Wisconsin is a solid 6-point favorite despite the venue disadvantage. Cannot say this is a bigger game for Miami than the recent ACC championship-game loss to Clemson, because that was a play-in for the College Football Playoff. Wisconsin had CFP dreams as well before losing its conference title game, so this OB is a glorified consolation prize for both teams -- but still with much at stake. A Badgers win would set a school record for most season victories. A Canes would would assure Miami its first top-10 finish since 03 on the road to 'Back.' Why is Wisconsin a clear favorite? UM's Turnover Chain-fueled defense is its strength ... but Wisconsin's D may be better than Miami's. The U had 30 defensive takeaways, but the Badgers had 26, led the nation in fewest yards allowed and ranked No. 3 in fewest points allowed. Three Badgers defenders were first-team All-Big Ten and three others were second-team. Miami's offensive line will be under the gun, and so will QB Malik Rosier, who is coming off consecutive bad games (in the Pitt and Clemson losses) and is missing his two top receivers in injured Ahmmon Richards and Chris Herndon. Miami's best upset hope by my view? Wisconsin can be sloppy with the ball, meaning that Turnover Chain could be changing hands tonight. Badgers sophomore QB Alex Hornibrook had 15 interceptions this season -- a lot. And Wisconsin running back Jonathan Taylor, though really good, lost five fumbles. Two really good defenses are in play tonight, but only one offense that is prone to turnovers. That is the Canes' best hope tonight. Well, that and the crowd. If UM fans can lift the Canes tonight as palpably as they did in the crucial late-season home wins over Virginia Tech and Notre Dame, Miami will win. My Orange Bowl Game pick: Upset. Hurricanes, 23-20.

Select other recent columns: Stanton Had All the Power -- And Used It. Do We Trust Jeter To Fix Marlins?. Dolphins Find Needed Joy. Seeing Past the Pain. Also: 'Tis The Season. The Fuel Of Doubt. One Bad Loss Doesn't Spoil All The Good. Adam Gase Must Find A Way. Truex Jr. Takes Trophy, But Dale Jr. Wins The Day. A QB, a Crisis & a Father's Love. The Hurricanes Are Back; Deal With It, America. Canes-Irish: Game For The Ages. Appreciate Perfection -- Period. The Godfather Speaks. Latest Drama in Bizarre, Trying Season. It Isn't Just Cutler. Back On Track & Ready To Roar. Jeter Betting On Jeter. Hope That Wasn't Goodbye. Wade Will End Where He Belongs. Larranaga Has Canes Flying High, Now This. Regret, Tears & a Legacy's Dark Shadow. Specials: Thank You, Mae Riback. Thank You, Edwin Pope.
Revisit our blog often because we update and add to our latest posts throughout the day.