Your polarizing predictions on tonight's Mayweather-McGregor fight; plus big reason for optimism on Dolphins (new column), Stanton pace at 63, latest 'Back In My Day' video, Hot Button Daily (Sat) & more

1) It is SATURDAY, AUGUST 26. R.I.P., Felo Ramirez: The Marlins Spanish-language broadcaster passed away this week at his Miami home at age 94. Ramirez called Marlins games since the franchise's inception in 1993 and was a legend in Latin American baseball circles. To an epic life well led, sir. 2) Mark Richt names Malik Rosier as Miami Hurricanes starting quarterback. But will it last? 3) Dolphins time! Know any die-hard Dolfans? Surprise and delight them with our new book on club's first half-century. Learn more or order here: Fins At 50. 4) In The Previous Blogpost (ITPB): Happy Solar Eclipse Monday, Hot Button Top 10 & more. 5) Join us on Twitter @gregcote. Also Facebook, Instagram, Periscope and Snapchat.

Stanton's chase for 60: After two more homers Friday giving him 49 for the season, Stanton's projected pace is now 63.

New column: Dolphins offense will make up for shortcomings on D: Can one feel excitement and dread all at once? We imagine those are the disparate yet oddly joined thoughts Miami Dolphins fans should be feeling as they now palpably face the coming NFL season. The question is who’s winning. Is it the optimist inside you? Or the pessimist within who always seems closer at hand? Side with optimism, I say. Here's why: This Dolphins offense will be better than the defense is bad. Click on Dolphins' Double-Jay Attack Portends Dynamic Offense to read.

POLL RESULTS: YOUR POLARIZING VERDICTS ON TONIGHT'S MAYWEATHER-MCGREGOR FIGHT: We invited you in a pair of polls (see below) to say who you wanted to win tonight's big Floyd Mayweather-Conor McGregor boxing match in Las Vegas, and who you predicted would win. After more than 1,100 votes were cast, your verdicts: On who you WANT to win the fight, it was the underdog McGregor winning your vote with 62.12 percent. On who you predict WILL win the fight, it was the favorite Mayweather with 69.70%.

PS3: PHILADELPHIA 38, DOLPHINS 31: Click on Alphabet Lesson: Jays Ready, D Not for my quick-hits column off last night's Miami loss in Philly in Fake Game 3 ..... In-game: Grant 69-yard catch and run ties it 31-31 ... Franks 56-yard FG just before half has Fins within 28-24 ... Dolphins 21-14 on Thomas 1-yard TD pass set up by end-zone interference call on Cutler bomb to Stills ... Miami 14-7 on another Ajayi 2-yard scoring run, this up by Jordan Phillips interception and return to Birds 3 ... Fins tie it 7-7 on 2-yard Ajayi TD run set by 72-yard Cutler completion to Parker. ..... Original post: The starters played so little in Miami winning then losing its first two exhibition games that little could be discerned about the season ahead. Tonight should tell more. Fake Game 3s (I think it's mandatory to call them the "dress rehearsal") are the one game of four in the preseason in

which the starters will play a lot -- likely the whole first half maybe seeping into the third quarter -- and the scoreboard matters a bit. You are putting your best

out there and trying to win, after all, for the only time in August. Five things to watch tonight: 1) How will the offensive line look? Center Mike Pouncey plays in a game for the first time since November and tackle Ja'Wuan James plays for only time this preseason. It'll be a bad sign if the ground game doesn't percolate tonight. 2) Pass defense, please!? Carson Wentz, who ain't Tom Brady, shredded Miami's D in two shared practices this week. Return of free safety Nate Allen should (had better) help. 3) Jay Cutler. He threw only six passes in his debut last week so this will be our first real look at the named starter. A solid showing by him will see hopes for the season buoyed. 4) The running game. Jay Ajayi will see his first extensive action and Kenyan Drake should play a bunch. Behind a starting O-line, we'll be looking for something close to good-to-go performance from Ajayi, last season's breakthrough star. 5) Middle linebacker and left guard. Mike Hull and newly signed veteran Rey Maualuga are battling to replace injured MLB Raekwon McMillan. Third-stringer Jesse Davis has inherited the LG spot. Solid play from those two positions will earn an exhale of relief from Fins coaches.

Note: Our Dolfan Satisfaction Meter postgame polls will return again this year, but they start with the regular season. So look for the for the first DSM poll on Sept. 10. 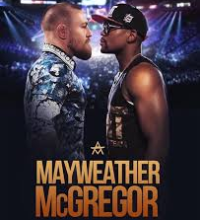 LESSER OF TWO EVILS? YOUR PREDICTION(S) ON THE MAYWEATHER-MCGREGOR FIGHT: If you're like me, you don't particularly like Floyd Mayweather or Conor McGregor, who'll be in a boxing ring this Saturday in Las Vegas for their much ballyhooed boxing/UFC hybrid. You'd probably like it if they could both lose. But curiosity and hype will have you watching, and human nature says you'll pick a side. You'll have a rooting interest, even if it's driven by rooting against somebody. I'm curious how you all feel; hence, these two polls -- one asking who you want to win, the other who you predict will win. Vote one with heart, the other with head, and check back often to monitor evolving results.

1. Mayweather-McGregor, 7 p.m.: You say it's a farce. You'll be watching anyway.

NEW 'BACK IN MY DAY': GENDER-REVEAL PARTIES: The latest BIMD, from yesterday's LeBatrd Show With Stugotz. Key phrase: "It's Larry!" Enjoy:

Select other recent columns -- Stanton the Litmus Test For New Owners (Don't you dare trade him!) Double QB Quandary A Rarity (On Dolphins, Canes' shared upheaval). New Owner, New Hope (Let's party at news Loria agrees to sell to Jeter group). A Diamond, Shining (Giancarlo Stanton's great season). Immortality Calling (Jason Taylor in Hall, now who's next?). Also: Right Time, Right Quarterback. The Uncommon Pressure On the Miami Dolphins. Blockbuster Would Be Slumpbuster for Riley. Paroled But Not Free. Don't Hold Your Breath. An Ageless Wonder, Even In Defeat. All-Star Week Proves Miami's Baseball Potential as Loria Era Ebbs. The Gentleman-Athlete Earned Our Thanks. Heat Lose Twice On Hayward. Bam Is Due Benefit Of Doubt. Make Fun of the Farce, But You'll Watch. No Parade In Sight. A Fall From Greatness And From Grace. NFL's Moral Obligation. The Dolphins' Eight Ifs. Home Run For Miami. The Jose Statue's Positive Purpose. An American Tragedy. History Breathes at UM Sports Hall. Is There A Team Brave Enough for Kaepernick?. Thank You, Mae Riback. A Ghost Tour of Miami's Sports Past. The Miracle of Liberty City. Thank You, Edwin Pope.