Do you agree with NFL relaxing rules to allow TD celebrations? Poll. Last day to vote!; plus Canes brace for Friday must-win in ACC; also, Marlins column, a clue in death of Cortez Kennedy?, new Back In My Day video, Hot Button Daily (Thu) & more

1) It is THURSDAY, May 25. Thoughts and condolences with the loved ones of the victims of the Manchester concert terrorism in the U.K. R.I.P., innocents. So terribly sad that a miserable coward in a suicide vest can wreak such sorrow. #GivePeaceAChance. 2) Click BIMD: Senior Discounts to watch my latest Back In My Day video from Tuesday's LeBatard Show. 3) Happen to know any Dolfans? Surprise and delight them with our book on club's first half-century, Fins At 50. 4) In The Previous Blogpost (ITPB): Hot Button Top 10, Sunday Marlins column & more. 5) Join us on Twitter @gregcote. Also Facebook, Instagram, Periscope and Snapchat.

New column: The Marlins' mysterious future: In what figures as a blockbuster summer for sports in South Florida, who buys the Marlins and what they do with the roster looms as the great unknown. Easy to say blow-it-up-and-start-over, but that wouldn't be easy. Or smart. Click on What's Next, Marlins? for my latest column.

PARTY'S ON! NFL RELAXES RULES ON END-ZONE CELEBRATIONS: At this week's NFL spring owners meeting, the lords of King Sport reduced overtimes in the regular season from 15 to 10 minutes (because everybody loves ties!), flip-flopped host cities for the 2021 and '22 Super Bowls, and approved the Raiders' stadium lease in Las Vegas. But the talking-point, clearly, was a seismic shift on allowing personality back into the game -- as in, end-zone celebrations. Yes, the Old Fuddy-Duddy has loosened the corporate collar. The "No Fun League" is ready to party. New rules give players much leeway in how they celebrate a touchdown. Once banned but now allowed: orchestrated end-zone dance parties, using the football as a prop and group celebrations. As a further example, the NFL said players may now "roll around or flap their arms like snow angels on the ground again if they choose." Defensive players who just allowed the TD that ignited the celebration might not like it. I'm more interested in what you think. For me, it's good for the league, it's fun -- as long as the celebrating is reasonably brief and does not devolve into taunting. What say you? Take a dip in our poll and let us know.

HEADACHES A CLUE IN DEATH OF UM FOOTBALL GREAT CORTEZ KENNEDY?: Miami Hurricanes football great, Cortez Kennedy, the dominating defensive tackle, has died at age 48, Orlando police said Tuesday. Kennedy died alone in Orlando, where he lived. Police are investigating but initially reported nothing suspicious. A relative told the New York Times that Kennedy recently had been experiencing headaches. Kennedy was inducted into the Pro Football Hall of Fame in 2012 after an 11-year career with the Seattle Seahawks in which he made eight Pro Bowls. Kennedy made the Associated Press NFL All-Decade team for the 1990s. "Tez" was the third overall pick in the '90 NFL draft out of UM after a stellar Canes career that included his being MVP of the 1989 national championship team. Kennedy is one of six former Canes inducted into Canton, and he and fellow Hall of Famer Warren Sapp are considered the greatest defensive tackles in school history. 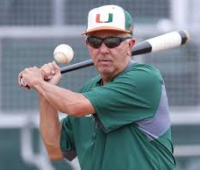 CANES WIN ACC TOURNEY OPENER, KEEP HOPE ALIVE TO CONTINUE 44-YEAR NCAA STREAK!: UM  yesterday beat Georgia Tech 6-5 in 13 innings in the Canes' ACC Tournament opener in Louisville. The Canes now face Wake Forest on Friday at 11 a.m., delayed from Thursday by rainouts in other games Wednesday. The winner advances to Saturday's semifinals. UM considers Friday's game a must-win in terms of the Canes staying alive to reach the NCAA Tournament for a record 45th straight season. Click on The Weight of History for my column by me previewing the Canes' challenge in the tourney. Original post: Miami Hurricanes baseball owns the top of our blog's marquee today. Most years at this time, UM is planning for a near-certain NCAA Regional host's role and dreaming of getting back to the College World Series in Omaha. This time, though, that's getting way ahead of ourselves. UM's record-setting 44-year NCAA streak is in jeopardy after an uncommonly common 29-26 regular season. Can the young men of Jim Morris (pictured) win the ACC tourney to secure an automatic bid? Or, falling short of the title, can they win win two games this week or perhaps even three to make an at-large invitation likely? That positions UM, a four-time national champion, in the unlikely role of underdog. Odds are against the Canes. That also lends an unusual drama to the start of conference-tournament play for Miami. Will Morris' next-to-last season end in ignominy? UM last missed the NCAAs in 1972. Today we begin to learn if the weight of that 44-year streak lifts or crushes the Canes.

THE LIST: LOCAL PLAYERS IN MLB DRAFT: The MLB Draft is June 12 and, according to Baseball America's Top 200 prospects list, here are the players from South Florida high schools who are highest rated:

HOT BUTTON DAILY / THU 5-25-17: Up to five events on today's sports calendar that interest SoFla most:

2. NHL playoffs, 8 p.m.: Ottawa at Pittsburgh in a winner-take-all Game 7 of Eastern finals.

3. Dolphins OTA day: Third of three this week, but this one's closed to the public, too.

Select other recent columns: Awful Team Continues Marlins Curse: Fish fans deserve a medal. Big Risk For Big Upside: On chance Heat could land Harry Giles in NBA Draft. NFL's Moral Obligation: League must do more for brain-injury sufferers like Buoniconti and Kiick. LeBron And Steph To the Rescue: How a third straight Warriors-Cavs Finals will save a lopsided postseason. The Dolphins' Eight Ifs: Explaining dichotomy of opinion on Fins. On The Team's Terms, Not His: What it would take for a Heat/Dwyane Wade reunion. Not In Our Stadium: N-word at Fenway and fans' responsibility. The Kid From Pampa: Why Dolphin draft's late rounds matter. Right Pick For Right Reasons: Fins' first-round choice Charles Harris. Home Run For Miami: Bush/Jeter group as frontrunner to buy Marlins. The Jose Statue's Positive Purpose: Controversy over Marlins' planned Fernandez memorial. An American Tragedy: Suicide of Aaron Hernandez. History Breathes at UM Sports Hall: Tour of a little-known campus gem. Spo's Greatest Challenge -- And Triumph: strangest of Heat seasons. Is There A Team Brave Enough for Kaepernick?: A curiously unemployed QB. Also: Thank You, Mae Riback, A Ghost Tour of Miami's Sports Past, The Miracle of Liberty City, Thank You, Edwin Pope.