How will Marlins do this season? Set the early bar on expectations. Poll. Last day to vote!; plus Cam Wake, my Fish column, Edwin Pope news, what Kate Upton is (not) wearing, ode to the Monopoly thimble, new Hot Button Daily & more

1) It is SATURDAY, February 18. We're about to put out a new song, "The Ballad of 1440," an autobiographical tale of a little boy in Hollywood, Florida who grew up to have an unexpected life. Click on image at left to see larger version. Will post a video of song on social media later this month. Stay tuned. 2) Our Miami Dolphins book on club's first half-century makes a great gift for any Dolfan you know. Click on Fins At 50 to order. 3) In The Previous Blogpost (ITPB): Trump sticks nose in Marlins' sale, Branden Albert, Shane Battier, 3 Fins in PFF 101, Fish farm barren, your Villain Purge verdict & more. 4) Join us on Twitter @gregcote. Also Facebook, Instagram, Periscope and Snapchat.

My new Marlins column: From Jupiter and the team's first full-squad workday of spring training, I wrote of how nothing is ever simple for this team. Still getting over the Jose Fernandez grief, now the players deal with questions about the prospective sale of the team and other off-field stuff. Click on French Embassy and Cuban Smuggling: Play Ball! to read.

Edwin Pope news: The Miami Herald longtime former sports columnist, who passed away earlier this year,  is being honored today in Okeechobee in a private celebration for family, friends and colleagues. There had been no public event planned. However, myself and Dan LeBatard are putting together a Miami event to honor Edwin that will be free and open to the public. Stay tuned for details.

WHAT IS YOUR OPTIMISM ON MARLINS SEASON AS TEAM STAGES FIRST FULL-SQUAD SPRING WORKOUT?: I'll be up in Jupiter for a column today as the Marlins stage their first full-squad workout of the spring. Much swirls around this team (as usual). The tragic offseason death of Jose Fernandez is a huge loss both from emotional and baseball standpoints. Now the team also deals with the distracting speculation about Jeffrey Loria selling the team and the White House-related Kushner family maybe buying and the possible offer to Loria of an ambassadorship to France (!) tossing a monkey wrench. But somewhere amid all of that there will be a baseball season, Miami's second under manager Don Mattingly (pictured). Most NL East estimations are that the Nationals are clear favorites and the Mets are next, with the Marlins in the middle -- better, at least, than the Braves and Phillies. The playoffs seem a longshot. Again. Although the Marlins toying around with .500 and contention seems plausible. We invite your thoughts on the matter. Take a dip in our poll and set the expectations bar on this Marlins season. 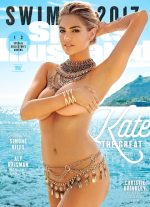 NO, IT IS NOT SEXIST TO SHOW THIS COVER PHOTO IN MY BLOG BECAUSE IT'S FROM A SPORTS MAGAZINE AND SHE IS WEARING (HALF OF) WHAT COULD ALMOST BE A SWIMSUIT, SORT OF: Cover your eyes, Junior! And click on the image to see a larger version, Dad. The Sports Illustrated "swimsuit issue" continues as a sublime and ridiculous slice of Americana and an annual $$$-maker for SI. This year three models get the cover prize of this week's current issue, with Kate Upton pictured here, setting a record in the category, "Minimalist Swimwear." (Note to self: Consider an abrupt career change; apply to be a Sports Illustrated photographer. Unless, that is, SI's budget and staffing have gone the way of the newspaper, in which case the person taking this photo may have been the lone remaining SI editor, or perhaps one of the other models using a smartphone). Where was I ? Is this a swimsuit bottom or jewelry? How come on my occasional forays to the beach I see not a person who looks like this (un)dressed like this, but rather a matronly, waddling Canadian packed into a black one-piece like 20 pounds of potatoes crammed in a 10-pound sack? That's a rhetorical question. Keep doing the great work you do, Kate Upton!

FAREWELL, THIMBLE. R.I.P.: The Monopoly board game is retiring its Thimble after 82 years. The Thimble, though never respected like the Dog or the Tophat, has stood sturdily across the generations, moving inexorably around the board, easing past the Iron, passing go, landing on Free Parking, staying out of jail, quietly making money for its owners. Farewell, great, humble Thimble, and a thumb's up to you. Gone ... but never forgotten.

2. Panthers at Los Angeles, 10 p.m.: Playoff-chasing Cats have won three in row and five of past six.

5. Rutgers at Hurricanes, 7 p.m.: Second of three in opening baseball series at The Light.

Select recent columns: French Embassy and Cuban Smuggling: Play Ball!, the new one, from the start of Marlins spring training. Surge Has Heat Buyers, LeBron In View, on how Heat's recent run has Miami poised to be buyers at trade deadline as possibility of first-round playoff meeting with LeBron James looms. Also: Loria: The End Of An Error, on team's reported possible sale. Spoelstra Leads the Parade, on the man at the wheel of recent long win streak. Give the Devils Their Due, on Belichick and Brady. Greatness Times Four, on Lebron, Brady, Serena and Tiger. Home Run For Montoya, Miami, from the Race of Champions here. Thank You, Edwin Pope, on the death of a friend, mentor and Miami Herald icon.