Women's March on Washington: Much respect to the hundreds of thousands participating today in the Women's March in D.C., a grass-roots stand-up for freedoms and rights. Proud to say my wife, and many others I know, are among them.

Race Of Champions: The ROC series is in the U.S. for first time today in Miami, with stars from NASCAR, IndyCar and Formula One all racing together inside Marlins Park. I like big events and am a curiosity seeker, so I'll be there columnizing.

The Death of a Wordsmith, other select recent columns: Thank You, Edwin Pope, my latest column, on the death of a friend, mentor and Miami Herald legend. Is Tannehill Close Enough to Great?, on NFL's final four from a Miami vantage. When Playoffs Become the Norm Again, on when you'll know the Dolphins are truly back. A Year Of Heartache, But Then A Smile, in review of South Florida's 2016 sports year. Also: An Orange Bowl Classic. Road Back Starts With Bowl Win. Missing Dwyane Wade.

TO A MONUMENTAL CAREER, AN EPIC LIFE AND A CHERISHED MENTOR: THANK YOU, EDWIN POPE: [Blog note: I rarely do this. I link to columns of mine, but rarely reprint them in their entirety here in the blog. But the death of my great friend and mentor, last night at age 88, is too important to me to not share as broadly as I can. So here is my tribute column]: 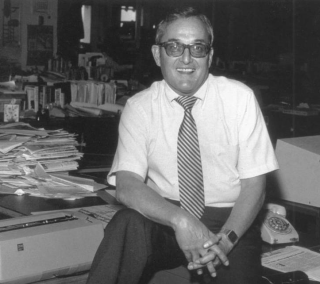 The Edwin I first knew, circa mid-'70s

"I grew up reading Edwin Pope." How many generations in South Florida will be saying that, thinking it, feeling it today? I was coming of age as a sports fan who hadn’t yet discovered he was interested in writing when Pope was at the peak of his powers, and reading him kindled and sparked something in me.

What it did was give me a future, a passion, a career.

Thank you, Edwin. For your inspiration, your talent, your grace, your mentorship and your friendship.Thank you so much.

South Florida and the Miami Herald have lost a giant with the passing of Edwin Pope at age 88. Newspapering and sports journalism and the craft of putting words in just the right order have all lost a giant.

Edwin came to the Herald in 1956 in his late 20s. He was sports editor and main sports columnist from 1967 until he retired in 2003, though still writing occasionally the next several years until age and Alzheimer’s dictated otherwise. I loathe the frivolous overuse of words like "legend," but the superlative has not yet been invented that can properly describe the epic arc of Pope’s career chronicling Miami sports.

From the black and white days of Cassius Clay in the 5th Street Gym to the Heat drafting some kid named Dwyane Wade — and everything in between — Edwin was the eyes and ears for South Florida sports fans, the rhyme and the reason.

He reigned before ESPN "SportsCenter" and before the Internet changed everything, putting news and opinion everywhere, and right now, diminishing the influence of the local newspaper. He reigned when "the paper" thudded onto front lawns every morning, up and down your block, and you turned to the sports section first to see what Pope had to say.

Dan LeBatard and I tried to replace him when he left. We never had a chance. Voices are everywhere, but there is no replacing Sinatra. Pope ends an era.

I felt smarter, as a teenager, when I read Edwin. There might be a word (or three) in every column that sent me to the dictionary. I liked that. He never talked down to readers. It’s a concept that has informed my own writing.

Edwin wrote with poetic elan. He told stories. He could make the scene on a racetrack’s backstretch as interesting as the horse race itself. You smelled the hay. You closed your eyes and saw the groom mucking-out the stable.

Edwin in his career's latter stage

Edwin also could be direct. When he wanted a column to throw a punch, it landed.

When Lou Saban abruptly left the University of Miami football team after only two years following the 1978 season to coach at West Point, the lead to Pope’s column was: "You wanted a deserter, Army? You got one."

Edwin didn’t tap-dance into a column or, in the parlance of a former editor of ours, "clear his throat." He got to it. He was concise. He didn’t overwrite, either in style or length. He valued his readers too much to waste their time.

He was a gentle man, but one whose humor could be sharp, and bite.

He’d had a stormy relationship with Dolphins owner Joe Robbie, and once kidded the only thing wrong with the name of the stadium was that it wasn’t Joe Robbie Memorial Stadium. (At least I think he was kidding.)

Edwin commanded utmost respect in press boxes. He was the dean, the monarch, the legend. If the clatter got too noisy too close to deadline, Edwin eventually would raise a hand and loudly snap, "Quiet!" and the room would shut up. He didn’t have to say it twice.

You didn’t want to be a waiter who ignored Edwin once too often when he was fishing for another drink.

"What’s a man got to do to get another Heinekin around here!?!" he once stood and loudly squawked from our table in some far-flung city after some game, Southern drawl lifting into a high pitch. 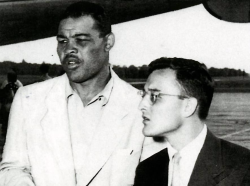 A favorite photo of his: A young Edwin Pope with boxer Joe Louis

Edwin was a drinker. May I say that? We had a good time on the many road trips we took together.

I was in the company of Edwin and more than one unnamed UM football coach as the two of them killed a 12-pack of beer hours before a game. You’d visit his hotel room and not be surprised to see a jug of red wine on ice in the bathroom sink. Once we closed down a bar in (I think) Indianapolis, stumbled out into the cold and were discussing how to go about getting a cab when it dawned on us our hotel was right in front of us.

I delighted to cover the 1992 Summer Olympics with Edwin in Barcelona, in a cramped, barracks-style dorm room we shared. After two weeks, the day before we flew out, we treated each other by taking a cab to the city’s famous nude beach to take in the sights. Why not!

Edwin was a wonderful colleague and road-trip companion of mine for 30 some years. Mostly he was a writing hero, somebody who was what I wanted to be. I have never stopped striving or falling short, or being grateful for his influence in my life and career.

His was a long, wonderful life well-led.

Thank you, Edwin. Always. Thank you.

PLAYOFFS: CHAMPIONSHIP GAMES: OUR PICKS FOR NFL'S SUNDAY AFC, NFC TITLE GAMES: Lots of football fans call this Sunday the single best day of the season, better even than the Super Bowl, and I expect Packers at Falcons and then Steelers at Patriots to live up to expectations. A great final four! Our 26th season of Friday Page NFL predictions in the Miami Herald saw us a robust 56.0 percent against the spread in the regular season, and we're 6-0 in the postseason after rolling a perfect 4-0 last week. Click on Championship Game Gems for my latest picks on the AFC and NFC title games. I see one game going as expected and the other not. We also offer our accompanying NFL column that today quantifies how good this final four is, historically, and how it gets the attention back where it belongs, on the field, after a weird week of drama for the NFL. Click on A Dramatic Final Four to read.

THE LIST: THIS FINAL FOUR IN THE POSTSEASON: Historically, this NFL final four includes three league giants and one interloper, as this list verifies. The franchise, head coach and quarterback records of these four teams in the postseason, listed in order of most all-time postseason wins, with total NFL championships listed in parentheses:

HEAT BATTERED IN ALL-STAR VOTING, WHITESIDE SNUBBED: Hassan Whiteside collects perceived slights the way others of us collects stamps or coins, and he has added a big new one to his collection. He barely made the East frontcourt top 10 in NBA all-star voting, slotting in 10th overall after finishing eighth in the media vote, 11th by fans, and only 14th by players. Your colleagues don't respect you, bro! Get angry! Get even! No Goran Dragic in the East backcourt top 10. Starters were named Thursday. Reserves get added next week. I'd think Whiteside (pictured) will be included, but it sure isn't a given after his comeuppance in the triangular vote.