« What was Miami's No. 1 sports story of 2016? Poll lists 15 finalists. Voting extended to this one last day!; plus no way Tannehill should play Sunday, our Canton finalists, The Luddite's Anti-Analytics Heat MVP Standings & more | Main | Dolfan Satisfaction Meter: 76.2% (season final); plus Fins out of playoffs in 30-12 loss at Pittsburgh with my game column, latest Hot Button Top 10 (updated) & more »

1) It is SATURDAY, JANUARY 7. Shameless Plug Alert! Our new Miami Dolphins book on the club's first half-century makes the perfect celebrate-they're-back-in-the-playoffs gift for every Dolfan you know. Click on Fins At 50 to order through Amazon, Barnes & Noble or elsewhere. 2) In The Previous Blogpost (ITPB): Miami's biggest sports story of 2016 poll, The Luddite's Anti-Analytics Heat MVP Standings, local guys who made cut for Canton & more. 3) Join us on Twitter @gregcote. Also Facebook, Instagram, Vine, Periscope and Snapchat.

PLAYOFFS: WILD-CARD WEEKEND: OUR PICKS FOR DOLPHINS-STEELERS, OTHER 3 GAMES: Twelve teams alive, four luxuriating with byes, and eight in action

Saturday or Sunday -- including, for the first time since 2008, the Dolphins, of course. Our 26th season of Friday Page NFL predictions in the Miami Herald saw us a robust 56.0 percent against the spread in the regular season. Click on Wild-Card Gems for our latest opening-round playoff picks for Dolphins-at-Steelers and others. I see an outright upset in one of the four games. I wish I could tell you it was the game at the field named after a ketchup bottle. We also offer our accompanying NFL notes column that today leads with our ranking of the 12 playoff teams, based on the likelihood of winning the Super Bowl. We also dole out our King Sport season awards for the league and Dolphins. Click on Playoffs And Hardware to read.

Dolphins playoffs, other select recent columns: It Isn't About Tannehill, how Fins have a chance in Pittsburgh with Moore if everything else goes right. There's A Longer Drought to End Now, off Sunday's loss as Dolphins prepare for first playoff game in eight years. A Year Of Heartache, But Then A Smile, in review of South Florida's 2016 sports year. Also: An Orange Bowl Classic. Road Back Starts With Bowl Win. Missing Dwyane Wade, Football Town Strikes Back.

POLL RESULT: DEATH OF FERNANDEZ VOTED BIGGEST MIAMI SPORTS STORY OF 2016: This was a major annual poll so we're giving the results the full treatment. I believe our blog has the smartest readers at MiamiHerald.com, and that y'all proved it again with these results. We asked what was the biggest Miami/South Florida sports story of 2016, offered our 15 choices and gave you five votes. That's because I thought the top three choices were obvious (I was right) and wanted to dig deeper. Your results: 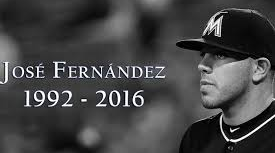 Putting in perspective the percentage results from a five-choice poll: Quintuple (x5) each percentage for an indication of the frequency that choice was included in everyone's consensus top five. The maximum percentage would be 20.00 if everyone used all five vote available. The fact Fernandez's winning percentage was greater than 20 indicates many voted only for that story as biggest. In other words, that story maxed out this poll and was a clear winner. Dolphins-in-playoffs and Wade-leaving both exceeded 80 percent in overall top-five mentions, after which there was a sizable dropoff. It was a big year for Miami sports, and to the hundreds of you who voted in this poll, I thank you! In case you missed it, click A Year Of Heartache, But Then A Smile for my column in review of South Florida's 2016 sports year.