1) It is FRIDAY, NOVEMBER 18. Marlins' Christian Yelich tied for 19th in NL MVP voting with five points -- two 9th-place votes and one 10th. 2) The Miami Herald's new book on Dolphins' first half century is now available, just in time for the holidays! Click on Fins At 50 for more info or to order through Amazon. 3) In The Previous Blogpost (ITPB): Trump writes Hillary on Schnellenberger's behalf, on Butch Davis joining FIU, SOPY rankings, your verdict on Brad Kaaya stay-or-go, R.I.P. Gardnar Mulloy & more. 4) Join us on Twitter @gregcote. Also Facebook, Instagram, Vine, Periscope and Snapchat.

A few of our select recent columns: Doctor Speed, on Harvard grad/UM medical student/NASCAR driver Patrick Staropoli. Also: Who Will Next Dolphins Hero Be? (on Fins' resourcefulness in four-game win streak. Return Of Wade (from Heat arena last week). Canes In the History Book (UM'ers among NFL career leaders). Miami QBs: No Worries (Tannehill is good enough, Kaaya will return). There's Hope For Us All (Cubs win World Series). A Needed Slap In Face (NFL's declining TV ratings). And Jose Tragedy Couldn't Get Worse, But Then It Did (Fernandez and cocaine).

IT'S UPSET BIRD DAY / WEEK 11: OUR PICKS FOR DOLPHINS-RAMS, REST OF NFL: We endured our worst showing of the season last week in our 26th season of Friday Page NFL predictions in the Miami Herald, going an unmentionable 5-9 overall and 3-11 against the spread. I mean, seriously. Awful. But I'm bouncing back, and the bounce began last night. Won twice by predicting Carolina outright but N'Awlins with the points; click Thursday Gem for that pick. With last night we're now 16 games above .500 against the spread for the season; not bad. For all of our latest selections click on Week 11 Gems as myself and the Upset BIrd ("Aawwwk!") bring you our latest predictions for Dolphins-Rams, our Game of the Week, Upset of the Week and more. We also offer our accompanying NFL notes column today that leads with an analysis of four former NFL stars with local ties who made the semifinals for 2017 Pro Football Hall of Fame induction. Click on South Florida to Canton to read. 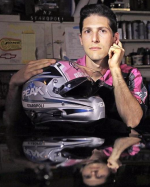 THE MOST INTERESTING MAN IN NASCAR: Harvard graduate. University of Miami medical student about to become a doctor of ophthalmology. Young man who became fascinated with medicine as a boy watching doctors save his father's life after a racecar crash. This man, Patrick Staropoli, 27, of Plantation, will make his NASCAR main-stage debut Friday night in the Truck Series race that kicks off Championship Weekend at Homestead-Miami Speedway. He'll run his first race in that truck, and on that track, the morning of his race. There are far bigger stories down at Homestead, such as who wins the Sprint Cup title (see poll below), but I'm not sure there is a more interesting story than that of Staropoli. Click on Doctor Speed to read my latest column. The image pictured is by the great Herald photographer, Carl Juste.

UPDATED: "THE LUDDITE'S ANTI-ANALYTICS HEAT MVP STANDINGS" (10 GAMES): IT'S A ROUT!: Points. Rebounds. Assists. That's it. With tongue only partly in cheek, we go old-school, strip it down, combine the Original Big Three statistical categories, and introduce a running, cumulative race for Heat team MVP. We'll bring you updated standings at five-game intervals, and the updated standings show a runaway for a certain big center, the guy who had 25 rebounds last night. With Miami now 2-8 after last night's loss to Atlanta, here's the Luddite's second installment, with 5-game rank in parentheses:

NFL PIX 'N FANTASY WEEK 10 RESULTS: PIX IN THE TANK, BUT LOBOS STAY EN FUEGO!: Every week in the blog I update you on how we did, for better or worse, the previous weekend with our NFL predictions and LeBatard Show fantasy team. NFL pix: Ugh. Embarrassing. Got beat up last week with s 5-9 record straight-up and (Dear God) 3-11 against the spread. I take some solace that we're still a pretty solid 14 games above .500 ATS, but we need to bounce back this week in the most desperate way. And will. Fantasy: Greg's Lobos pounded Charlie's team 135-97 in the radio show league and we're now a league-leading 7-3 with (like the Dolphins) four straight wins. Got 28 points from Allen Robinson last week, 27 from Delanie Walker and 21 from Drew "Money" Brees, who craps 20-point games. Keep it honkin', big rig. Keep it rollin', 'Bos!

THE WORD "POSSE" AND RACIAL OVERTONES: We spent a good bit of time chewing this over on the LeBatard Show yesterday. Cavaliers and former Heat star LeBron James took umbrage with Knicks president Phil Jackson, saying he's lost respect for him, because Phil referred to LeBron's "posse" to mean his close groups of friends, confidants and business associates led by Maverick Carter. Said LeBron: "If you go and read the definition of what the word 'posse' is, it's not what I've built over my career. It's not what I stand for, it's not what my family stands for. I believe the only reason he used that word is because he sees young African-Americans trying to make a difference." For what it's worth dictionary.com's informal definition of "posse" is simply, "a group of friends or associates," which is pretty neutral. I'm old enough to associate "posses" with old Westerns on TV. I thought in this case it was a fairly benign term to use, and thought LeBron may have been being a bit overly sensitive. Then again, if he was offended, who am I to say he shouldn't have been? I'm curious how you feel about this. So I invite you to tell me, here: