1) It is THURSDAY, AUGUST 18. If coaches took their cue from Donald Trump: "The only way we lose this game is if the other side cheats and the system is rigged." 2) We're No. 8! Florida is the eighth-freest state in the U.S., based on this new study factoring various data. 3) In The Previous Blogpost (ITPB): 'Purgatory Mount Rushmore' poll, Hot Button Top 10, Dolphins-Giants PS1, Olympic tears, Heat schedule dissected, six days in November & more. 4) Join us on Twitter @gregcote. Also Facebook, Instagram, Vine, Periscope and Snapchat.

On newly christened Hard Rock Stadium: The name on the stadium doesn't matter, only the team in it does. Pro Player, Land Shark, Sun Life, now Hard Rock -- it's Dolphins stadium on Sundays, Hurricanes stadium on Saturdays, and up to us whether we choose to use the leased corporate name at all. Heck, it's still Joe Robbie Stadium to me! Call it what you will. What matters is that the Dolphins and Hurricanes win inside that place, whatever it's called. That's the theme of my latest column. Click on Name Of Stadium Doesn't Matter to read in full.

Column six-pack: Six other select recent columns, ICYMI: A-Rod to Fish Made Sense, on what might've been. Time for Baseball and Cooperstown to Reconcile With Banished Stars, on the Purgatory Four.  Result Won't Matter, But How Tannehill Looks In New Offense Will, as Dolphins opened preseason. The Weight Has Just Begun, inside the office and expectations of new Canes coach Mark Richt. A Chance for Football to Retake Miami, on Wade's departure from Heat creating opening for Fins and Canes. Ichiro!, on wonder of ageless Marlin as he chased 3,000 hits.

WHAT DO WE THINK OF HARD ROCK STADIUM AS THE LATEST NAME FOR THE HOUSE THAT JOE BUILT?: It's still Joe Robbie Stadium to me, at least in my heart, but, putting a positive spin

on it, I'd say Hard Rock Stadium at least is a better name (certainly more football-macho) than the previous three. I hate all corporate names, as careful readers know. In columns I avoid them when possible. I go with the generic, such as the Heat playing in "the downtown bayside arena." Why should I pimp for an airline? I hate the idea that companies spend big to fix their name onto where our teams play. Even worse is that we fans (and most sheep-like media) immediately fall in line and obediently start using the new paid-for-advertising. We don't have to, you know. They can't make us. Call it Joe's Place. Steve's Canopy. Dolphins Stadium. Canes Park. Whatever. You wanna hear Pavlov's bell and go with Hard Rock? Great. That's fine, too. Unless you're against gambling and therefore casinos, chances are there isn't a moral issue. Plus Hard Rock Stadium beats the pants off A) Pro Player, an ill-fated subsidiary of underwear giant Fruit of the Loom; B) Land Shark, a third-tier beer; or C) Sun Life, a Canadian financial company. So the progression has gone from underwear to beer to a foreign company peddling life insurance to casinos. Here's a thought. Make the Dolphins, who haven't won a playoff game since 2000, earn that Hard Rock designation. Given the tough situation the Fins are in and have put their fans in, until the team wins another playoff game, call if Rock & A Hard Place Stadium. I'm just having a little fun. What do you think of the new name? Vote and check back often to monitor evolving results. 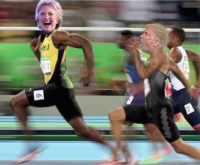 SUMMER OLYMPICS MEET PRESIDENTIAL POLITICS: Two of my favorite things to follow closely, both current, are presidential politics and the Summer Olympics, and so I loved and couldn't resist passing along this mashup "photo" somebody sent to me, with Hillary Clinton as Usain Bolt. Relax, Republicans and Trump-ets. The photoshop is merely reflecting the trend in public opinion polls, which of course are always subject to change. If the Donald takes over the lead in the national polls lead we'll certainly rejigger this to have The Donald's coif atop Bolt's winning body. Deal? The Olympics end Sunday. The ultimate race, the one for the White House, ends Nov. 8.

MARLINS: SLIP-SLIDIN' AWAY...: Perhaps it has become a self-fulfilling prophecy that when slugger Giancarlo Stanton was lost for the season with his latest injury, most wrote off the Marlins' chances of winning a wild-card playoff ticket. The Fish have now lost two in a row and five of their past seven to fall two games off wild-card pace. One team they are chasing, Pittsburgh, hosts Miami Friday through Sunday. Marlins need to take at least two of three to keep a grip on this thing.

Poll result: Strong Hall of Fame support for MLB's 'Purgatory Mount Rushmore': We asked if Barry Bonds, Roger Clemens, Alex Rodriguez and Pete Rose should be in the Hall of Fame, and by nearly a 3-to-1 margin it was 51.5 percent saying yes to all four vs. 17.4 voting no to all four. Another 19.2% said yes to Rose but not the steroids guys, while 8.2% said yes to the 'roids guys but not Rose. The remaining 3.7% were undecided.

WELCOME TO THE BIG-TIME, JOY TAYLOR: Former Dolphin Jason Taylor's kid sister (pictured left, and I cannot explain that beam of orange light rising out of her head)) made a nice mark in South Florida as a 790 The Ticket radio morning co-host and since has landed nationally at Fox, where she'll soon be joining Skip Bayless and Shannon Sharpe on a still-unnamed FS1 morning show. With the big time comes increased attention, scrutiny and criticsim, of course, so it's no surprise awfulannouncing.com dug up some old Joy Tweets to produce this story under the headline, SKIP BAYLESS' NEW MODERATOR JOY TAYLOR ONCE CALLED HIM A 'STRAIGHT UP CARTOON' AND 'TROLL'. On the bright side, without question, Skip Bayless has been called much, much, much worse.