1) It is SATURDAY, JULY 16. Our thoughts are with the people of Nice, France, a lovely town I have had the pleasure to visit, in the wake of the latest terrorist attack. The people committing these acts are the the biggest cowards in the history of mankind. If only our prayers were helping. 2) In The Previous Blogpost (ITPB): Brady suspension upheld with Dolphins poll, grading Marlins' All-Star performances, the ESPYS and NBA stars' anti-violence video, new MLB odds, Greg's Lobos news & more. 3) Join us on Twitter @gregcote. Also Facebook, Instagram, Vine, Periscope and Snapchat.

Six-pack: Six select recent columns, ICYMI or thought 'em so great they merited another look: Dolphins On Own to Escape Rut, Reshape Image, the latest, on impact of Tom Brady's upheld suspension. The Strange Dissolution of Heat's Big 3, on rocky departures of LeBron and D-Wade followed by medical issues with Bosh. Mission Accomplished, Legacy Secure, our farewell to Wade. These Marlins Deserve Support Despite the Owner, and that says it all. Ali Legacy Should Include Other Athletes' Thanks, on setting a template. A Baseball Odyssey Finds Its Mountaintop, on local kid Richard Bleier's long climb to Yankees.

D-Wade's ugly divorce hasn't stopped being ugly: Dwyane Wade's divorce from childhood crush Siohvaughn Funchess ended in 2013 with a $5 million-pus settlement. Or, not. She is now asking the Cook County courts to dismiss her settlement agreement and is going after a cut of his new $47 million deal with the Chicago Bulls. Click here for the latest via the Chicago Tribune.

WHY DOLPHINS OWNER STEPHEN ROSS IS SMARTER (NOT TO MENTION RICHER) THAN US: You don't get to be worth $7 billion like Dolphins owner Stephen Ross is by making dumb business decisions. So when Ross, 76, decided to reach into his own deep pockets for some $400 million in massive, ongoing improvements to his and his team's stadium (including that

enormous canopy), he was justifiably given much credt for doing it himself rather than begging tax dollars from the public trough. It wasn't pure altruism, though. It was

business. An investment in his own net wealth. And the latest Forbes ranking of the world's 50 most valuable sports franchises for 2016 verifies how smart Ross was in knowing he'd get his 400K back, and fast. The Miami Dolphins make the list as 33rd overall with a value of $1.85 billion. That is mid-pack (16th) among all NFL franchises, but represents a huge 42 percent increase over the previous year -- attributable largely to the stadium makeover. Only six of the 32 franchises more valauble than the Dolphins had a larger one-year spike in overall value. Twenty-seven of the 50 teams on the list are NFL clubs, by the way, led by the Dallas Cowboys, No. 1 overall valued at $4 billion. The remaining teams are from the NBA (8), international soccer (8) and MLB (7). The Miami Heat are just outside the Top 50. Bottom line? Give Ross enormous credit for paying for these stadium upgrades himself. Yes. But understand he knew very well it would be an investment that would pay for itself. And it already has, even as the construction workers and cranes continue to swarm over the stadium. Here's a poll on how you think Ross has been as Dolphins owner:

HISTORYMIAMI MUSEUM'S 'BEYOND THE GAME': "Beyond the Game: Sports and the Evolution of South Florida" premieres today/Saturday and runs through Jan. 15 at HistoryMiami Museum, 101 West Flagler Street. The Museum's own description: "Since the 1920s, sporting events and institutions have both mirrored and shaped the growth of South Florida. Miami Jai-Alai and Hialeah

Park two of the area’s earliest sporting attractions, lured northern tourists with, respectively, the spectacles of jai alai, an ancient Basque game imported from Cuba, and horse racing. Along with the annual collegiate Orange Bowl Game, these quickly became world-famous draws and by the mid-century were helping fuel the public fascination with South Florida as a locus of sun, fun, and leisure. It was an image that eventually would draw not only visitors, but transplants to the region. By the early 1960s, Miami-Dade’s population topped one million, including thousands of new arrivals from Cuba. One of these, a young architect, designed a venue for the distinctly South Florida sport of powerboat racing that captured the optimism and exuberance of the era: Miami Marine Stadium. At the same time, across the bay on Miami Beach, the Fifth Street Gym emerged, in the words of one observer, as “an island of democracy” amid the realities of Jim Crow segregation. It also made South Florida an epicenter of boxing. Professional sports franchises — and the rise of one very prominent college football team — followed in the 1970s, 1980s, and 1990s, cementing South Florida’s sporting legacy and acknowledging its status as a modern metropolis." Call the museum for more info or click here to register for Saturday's premiere. The project is ambitious, broad and sounds great. And made all the more timely by the recent death of Muhammad Ali, who made Fifth Street Gym what it was.

Poll result: Sorry, Dolphins fans, but most don't see Brady suspension toppling Patriots: We asked what you think will be the ultimate impact this season of Tom Brady's 4-game Deflategate suspension being upheld, and 58.8 percent said "negligible" vs. 41.2% who said "significant." (And that's a Miami-based poll, where an element of Dolfans' wishful thinking might reasonably be factored in). 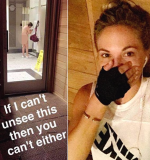 THE PATENT ABSURDITY OF A PLAYBOY MODEL BODY-SHAMING ANYBODY: So a Playboy "model" named Dani Mathers body-shamed somebody this week by posting on Snapchat a photo (pictured left) of an unclothed older, heavier women taken at a gym. Click here for the background story. The social-media backlash against Mathers was swift and righteously strong, to a point the tone-deaf model had to scurry and emit a round of lame clarifications and too-late/damage-done apologies. I hope Playboy fires her ass after somebody awakens Hef from his nap to tell him. More than that, I hope the poor woman whose privacy she invaded sues her in civil court. But here is the thing that is especially galling to me about this. Dani Mathers is pictured at right, on the job. This is who she has chosen to be: Somebody answering to the description "Playboy Bunny" and presenting herself as a vapid sex-object. And this is the person who dares make fun of any another woman!? The victim here, the woman whose privacy was breached, she may be a secretary, a homemaker, a retired teacher, a heart surgeon or homeless. Doesn't matter. No matter who or what she is, I believe I'd prefer her company to that of an egotistical, mean-spirited airhead in silk rabbit ears whose entire self-worth apparently is confined to what she's admiring in a mirror or the next compliment from a leering man.