1) It is SATURDAY, JUNE 11. Headed down to Canes baseball today to see if UM can beat Boston College again and advance to the College World Series. 2) Miami sports icons: The Louisville memorial service for Muhammad Ali was yesterday. Pictured right: the time Ali and Dan Marino posed playfully as if about to fight. Based on appearance of both, I'd estimate the photo as late-'80s. Click on image to see it larger. 3) In The Previous Blogpost (ITPB): Ranking Ali among century's greatest athletes poll, Cassius Clay music video, R.I.P. Kimbo Slice, D.Wade in bed, the wonder of Jose, Game of Thrones, Crisis of Character & more. 4) Join us on Twitter @gregcote. Also Facebook, Instagram, Vine, Periscope and Snapchat.

The Last 5: My five most recent columns, ICYMI or thought them so wonderful they deserved another look: LeBron Wants More Than Title From Finals, the latest, on LeBron James angling to take back best-player crown from Steph Curry. Ali Legacy Should Include Other Athletes' Thanks, on how Ali set template for individuality in sports. A Baseball Odyssey Finds Its Mountaintop, on local kid Richard Bleier's long climb to Yankees. Nobody Wins When a 55-Year Marriage Ends In Divorce, on PGA Tour leaving Doral. Morris Vs. 'Almost Impossible' Expectations, as Jim Morris and UM baseball host NCAA Regional.

"Oh. Well then. If former NBA career scrub Brian Scalabrine says he wouldn't be shocked if Kevin Durant signed with Miami, I guess we can start the party now!" --Greg Cote 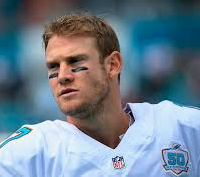 CBS SPORTS' BRUTAL APPRAISAL OF TANNEHILL: FAIR OR OUT-OF-BOUNDS?: CBS Sports NFL writer Jason LaCanfora this week ranks all 32 starting quarterbacks and divides them into seven "tiers," with Miami's Ryan Tannehill's ranked in the sixth tier entitled, 'Good Luck With These Guys.' The seventh tier is an "incomplete" on the two rookie starters, so, in effect, Tannehill is lumped on the bottom rung of starters, along with the likes of Tyrod Taylor and Blaine Gabbert. Seems harsh to me. Clearly, you wouldn't place Tannehill in tiers 1 (Bona Fide Franchise QBs) or 2 (Top Pros, Proven Winners). But, arguably, he might have belonged somewhere in tiers 3 (Rising Stars) or 4 (Guys That Can be Winning QBs). Instead LaCanfora ranks Tannehill as no better than 25th of 32 starting QBs, and writes, "Not sure he is going to be Adam Gase's cup of tea. He doesn't make big-boy reads or throws and is very limited downfield. Still looks pretty rudimentary to me." (Click here to see LaCanfora's full story and list). Curious how you feel about the largely negative appraisal of Tannehill as he enters his fifth season, approaching age 28 and still looking for his first playoff berth. Take a dip in our poll and say why you feel as you do?

Sharapova: She's right. Her 2-year ban is harsh: No doubt it is the responsibility of athletes -- and their doctors -- to be aware of what substances are on a banned list that marks them as PEDs. But the punishers must put violations in context. In this case Maria Sharapova for many years was prescribed meldonium, a drug said to boost oxygen and blood flow, because of a family history of heart issues. It did not go on the banned-substance list (and become tennis-"illegal") until Jan. 1, after which she tested positive and immediately stopped using it. Sharapova, 29, is appealing the two-year suspension as "unfairly harsh." She's right. Six months or the next two majors seems closer to fair.

NBA Finals: Warriors still winning, but LeBron-Curry percolates: Golden State is up 3-1 after last night's win in Cleveland, with a chance to put it away at home Monday night. But the series within the series -- LeBron James vs. Steph Curry -- is closer, and has been fascinating, with King James seemingly determined to take back the crown (NBA's Best Player) snatched from him by Steph. James is averaging 24.8 points in the four games. Curry is at 21.5 after popping 38 last night. Click on LeBron Wants More Than Title From Finals to read my latest column.

Marlins: Call to the bullpen means uh-oh: Fish won a second straight last night but bullpen has been off lately. It's weird, because closer A.J. Ramos has converted 28 consecutive save opportunities. It's everybody else who stinks. Giancarlo Stanton's funk is hurting Miami, but relief pitching is hurting more. Another thing: Miami's record this season against the two worst teams is the majors (Braves, Twins) is 2-7. (But Ichiro keeps hitting!)

Stanley Cup Finals: Rooting for a city, not a team: Pittsburgh leads San Jose 3-2, with Game 6 on Sunday. Penguins can close out their fourth Cup title (1991, 1992, 2009), while San Jose is playing in its first Stanley Cup Finals in its 24th season. The latter fact would normally have me rooting for the Sharks, but I tend to root for cities when I don't care about either team, and in this case, my sensibilities are much closer to blue-collar Pittsburgh than to Silicon Valley San Jose. So, go Pens.

FORBES' LATEST LIST OF PEOPLE MUCH RICHER THAN YOU AND I: Forbes' 2016 list of world's 100 highest-paid athletes in combined salary/winnings and endorsements finds soccer star Cristiano

Ronaldo (pictured) No. 1 at $88 million. Rounding out the top five: Lionel Messi 81.4M, LeBron James 77.2, Roger Federer 67.8 and Kevin Durant 56.2. Click here for full list. Heat's Dwyane Wade tops Miami athletes at No. 33 with $32 million. (Oddly, Wade, who wears No. 3, also was 33rd on ESPN's recent World Fame 100 list). Palm Beach's Serena Williams is 40th at 28.9M, Heat's Chris Bosh is 55th at 25.2 and (surprisingly) Heat's Joe Johnson is 77th at 22.9. Notable among the ex's on the list: Former Cane and Dolphin Olivier Vernon is 39th at $29 million, verifying the free-agent deal he got from the Giants makes him -- based on career accomplishment -- maybe pro sports' most overpaid athlete at the moment. Conspicuously absent from Forbes' list is Marlins' Giancarlo Stanton -- conspicuous considering he signed a 13-year, $325 million contract. Explanation: He is making "only" $9 million this season because his contract is heavily back-loaded, a reason cynics might imagine he'll be a Marlin for the next few bargain years of the deal and then perhaps be traded when the mega-bucks begin to kick in.