1) It is WEDNESDAY, JUNE 22. NBA title odds for 2017 out via Bovada show Warriors favorites at 2-1, then Cavaliers 9-4, Spurs 15-2 and Thunder 17-2. Miami Heat are tied for eighth at 33-1. 2) Florida Panthers announced 2016-17 schedule, with regular season opening at home vs. New Jersey on Oct. 13. 3) Hope it was a Happy Father's Day for all my fellow padres and papis! Christopher and I played golf at Inverrary East, on his dime. I played my worst round in three years but had a great time. 4) In The Previous Blogpost (ITPB): LeBron fulfills promise, Hot Button Top 10, your verdict of rooting for or against LeBron & more. 5) Join us on Twitter @gregcote. Also Facebook, Instagram, Vine, Periscope and Snapchat.

Six-pack: Select recent columns, ICYMI or thought them so great they deserved another look: Trust LeBron On His Next Decision, the latest, on what's next for a King on top of his world. Rooting For LeBron to Make History, on our treasonous hopes entering Game 7. Ichiro's Milestone is Huge Whether Rose Agrees Or Not, on Ichiro's achievement. Ali Legacy Should Include Other Athletes' Thanks, on Ali setting template for sports. A Baseball Odyssey Finds Its Mountaintop, on local kid Richard Bleier's long climb to Yankees. Nobody Wins When a 55-Year Marriage Ends In Divorce, on PGA Tour leaving Doral.

U.S. SOCCER PUT IN ITS PLACE BY MESSI, MIGHTY ARGENTINA: [Update: Argentina thumps U.S. last night 4-0 in Copa America semifinal, the Americans conceding a goal three minutes in and then a brilliant free-kick banana by the wondrous Lionel Messi. It was men against boys as the world's No. 1-ranked team dominated in possession with brilliant passing and tight defensive marking that left the U.S. with precious few scoring chances. But still an overall positive tournament for the U.S.]. Original post: Sports has just seen a major upset: Cleveland beating Golden State for the NBA championship after trailing 3-1 in

the Finals. Will we see another shocker tonight? The U.S. beating world No. 1 Argentina in the Copa America Centenario semifinal tonight in Houston (9 p.m., FS1) would be an upset comparably big. It will require an American squad missing three suspended starters to neutralize Argentina's diminutive maestro Lionel Messi, the goal machine. Messi has bounced back from a rib ailment to scored four goals in the Copa in the minutes equivalent of less than two full games. The opponent and stage make this our national team's biggest home game since the round of 16 in the 1994 World Cup. (It's Colombia vs. Chile Wednesday in the other Copa semifinal, with the two winners meeting Sunday in New Jersey for the championship). For the U.S. it has been a solid tournament showing already, but pulling this upset to reach the final would be a major coup for both the USMNT and at-times embattled coach Jurgen Klinsmann. The coach was asked Monday f we might expect a defensive posture from the depleted Americans. No, he said: "We want to take the game to them. We want to go eye to eye, because we've done that tremendously well throughout this tournament. There's no need to change now." But to adjust, yes, with midfielders Alejandro Bedoya and Jermaine Jones and forward Bobby Wood all suspended. Clint Dempsey has had a strong tournament for the U.S., and more of that will be needed. (Dempsey and Messi are pictured, left to right). Odds favor Argentina, of course. But more than they favored Golden State with a 3-1 series lead? It's one game. It's soccer. The stadium in Houston will be full. "This is a one-off," as Klinsmann reminded reporters. "Anything can happen." 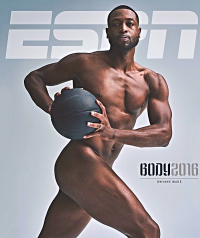 AND IN OTHER NUDES, DWYANE WADE IS NAKED IN A MAGAZINE: Heat star and pending free agent Dwyane Wade, who has said he hopes to re-sign with Miami, appears artfully nude in ESPN The Magazine's annual Body issue, which will be online July 6 and on newsstands two days later. "Artfully nude" means he is completely naked but his body is posed and photographed in a way that shows neither his backside nor that most private region out front -- the area on an opponent that Draymond Green might try to kick during a game. I must say D.Wade's physique looks very good for a man of 34, or of any age. Naked athletes are nothing new; remember that the Marlins' Giancarlo Stanton did the Body issue a couple of years ago. Was it just last year that Serena Williams posed en buff? Naked athletes and celebrities in general have become de rigeur, as anyone who follows Kim Kardashian on social media knows too well. There used to be a shock value, a titillation that no longer exists. Now it's sensory overload. It's too much information. I feel like filing a class-action cease-and-desist to get the Kardashians to please stop being publicly nude. I mean, OK, famous people, we know you're attention whores and that you're proud of your bodies. We get it. But, just for something different, how 'bout you surprise us and try a little modesty once in a while just to see how you like it. Dare you!

LEBRON REIGNS, FULFILLS HIS PROMISE ... NOW WHAT?: [Click on Trust LeBron On His Next Decision for my new column, now online] LeBron James jilted left Miami to return to hometown Cleveland with the promise of delivering that city its first major-sport championship since the Browns in 1964. He promised one championship, not "six or seven or..." OK, he's done that now. Promise fulfilled. LeBron is pictured last night holding the championship trophy and his NBA Finals MVP trophy, cradling both as if the were his babies. So now what? James is a pending free agent and starting on July 1 can do whatever he wants, go wherever he wants. ESPN's Stephen A. Smith has reported sources in Miami telling him LeBron could possibly return to Miami if the Cavs won it all. Other speculation is that the Los Angeles Clippers could be the most enticing option for him. But would he dare leave Cleveland and its fans a second time, quite literally raining on their championship parade? I'll have a new column on LeBron's championship, legacy and future that should be online by early afternoon today. Meantime what is your gut feeling and best guess on where LeBron will be as next season begins? Not what you hope might happen, but what you'd bet will. Take a dip in our poll and check back often to monitor evolving results.

OH-NO-MAHA!: HURRICANES FIRST TEAM OUT OF CWS WITH 5-3 LOSS: Miami won national College World Series championships in 1982, 1985, 1999 and 2001. This was the program's 25th appearance in Omaha. UM baseball's pedigree is beyond debate. But this also is true: The Canes have not done very well in Omaha since last winning in '01. The exited early in 2003, '04, '06, '08 and '15, and now they are the first of eight teams eliminated in a 5-3 loss to UC-Santa Barbara today, after a 5-1 loss to Arizona to open the double elimination CWS. Miami today got a solo home run by Zack Collins and run-scoring singles from Randy Batista and Collins but it was too little. This year's Canes were supposedly so much better and readier for the stage than last year's; so coach Jim Morris had said. UM at 5-1 odds were tied for second favorites to win it all after the top-ranked Florida Gators. Now the Canes are sent packing at 0-2, a very disappointing end to what had been a very good season prior to the stumble in Omaha.

USGA EMBARRASSED ITSELF AT OAKMONT: My God did the U.S. Golf Association dodge a bullet Sunday in the U.S. Open at Oakmont! Dustin Johnson (pictured) ended up winning by three shots,

despite incurring a one-stroke penalty when his ball ever-so-slightly moved on the green through no apparent fault of his. A tsunami of outrage would have ensued had that ruling ended up costing him his first major title. Even if the ruling was correct, the USGA erred in holding the possibility over his head, making him play much of the final round unsure if he'd be penalized. Fellow golfers like Rory McIlroy and Jordan Spieth Tweeted their outrage on Johnson's behalf. The great Jack Nicklaus, who is sort of golf's conscience, called the situation "terrible" and said, "Golf is a game of honor. That's what the USGA believes in, and that's what players all believe in. And when you have a situation where the official said, 'Did you cause it to move?' and he says, 'No,' then that should be the end of the story." Jack's right, of course. Even as it ultimately lucked out, the USGA lost Sunday as much as Dustin Johnson won.