1) It is TUESDAY, APRIL 12. Ronda Rousey praises Dolphins. Click here for the video. 2) Thanks to all the listeners, viewers and Tweeters who liked our "Back In My Day" on today's LeBatard Show. 3) In The Previous Blogpost (ITPB): Hot Button Top 10, The List (Dolphins), your verdicts on LeBron/Tiger & more. 4) Join us on Twitter @gregcote. Also on Facebook, Instagram, Vine, Periscope and now Snapchat, too.

Panthers' Stanley Cups odds: Out today via Bovada, Florida is tied for eighth at 16-1 odds, better than opponent Islanders' 25-1. Capitals are favorites at 4-1, followed by a knot of five teams at 8-1. Cats Roberto Luongo (30-1) and Jaromir Jagr (35-1) are team's most plausible betting longshots for playoffs MVP.

The Last 3: My three most recent columns, ICYMI or thought them so wonderful they deserved another look: Heat & Panthers' Shared Blueprint, the latest, on two teams' similar philosophy. Now the Proving Begins, as Panthers end regular season and face playoffs. Out Of Excuses, off Marlins Opening Night.

HEAT OWNER ARISON IN THE CROSSHAIRS OF CARNIVAL, CUBA AND POLITICS: Micky Arison's net worth is $7.7 billion, although it may have risen to $8 billion while you were reading this sentence. He is chairman of Doral-based Carnival Cruise Lines, the world's largest. He also is principle owner of the Miami Heat. As such, his two primary interests and business ventures put

him in the crosshairs of the latest news regarding his cruiseships, Cuba and politics. We first tackled this subject in the blog last July when Carnival first won

approval to begin cruises to Cuba. For Arison (pictured) and Carnival it could be great for business. But many South Florida Cubans who fled that island's Castro tyranny (and many of those are Heat fans) are angry over normalized U.S.-Cuba relations and also about Carnival ships docking there. We ran a poll here last July asking if Carnival planning trips to Cuba negatively impacts how you view Arison, and it was 79.9 percent "no" vs. only 16.8% "yes" and 3.3% "undecided. But I wonder if the view has changed now that the Carnival-Cuba startup is soon -- first ships are set to head south in May -- and now that we know this disturbing detail: the still-oppressive Cuban government controls what passengers may be aboard the cruiseships, and they do not include Cuban-born people, which of course includes Cuban exiles living in and around Miami. Carnival has asked the Cuban government to relent on that policy, but, if Carnival wishes to do business in Cuba, it has no choice but to agree to that one huge restriction, even though it is plain discrimination, of course. Imagine Carnival traveling to a country that insisted only white people be aboard the ship? Or banned Muslims? As I wrote last July, I am in favor of normalized U.S.-Cuba relations, which I think ultimately will benefit the Cuban economy and people. But clearly it is wrong for the Cuban government to not allow folks born in Cuba and exiles in Miami to be aboard those Carnival ships, as we discussed on yesterday's Dan LeBatard Show with Stugotz on ESPN Radio. Dan was particularly passionate on the topic. And there protesters outside Carnival headquarters Tuesday. So, nine months after our first poll, let's repeat the question and compare the vote. Check back often to monitor evolving results.

TWO TEAMS, SIMILAR BLUEPRINT AS HEAT, PANTHERS FORGE PLAYOFF PATH: [Panthers Sasha Barkov and Jaromir Jagr, pictured left, and the Heat's Justise Winslow and Dwyane Wade, right, personify each team's winning blend of experience and youth -- the blueprint that carries each to the playoffs. Click on Heat & Panthers' Shared Blueprint for the online version of the my latest column] Appreciate the rarity of this first. The Miami Heat and Florida Panthers are about to both enter the playoffs in the same season for only the fifth time since 1993, when hockey joined basketball down here. And South Florida is one of only five markets to have both its teams reach the 2016 postseason, along with Dallas, Detroit, Los Angeles and Oakland/San Jose. Even more notable is the similar blueprint the Heat and Panthers have shared to find success, with rosters that blend wise and wizened veterans and raw youth. For the Heat it’s a blueprint that is very different from the company norm, showcasing an unusual reliance on young players by a franchise that, from Pat 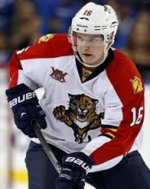 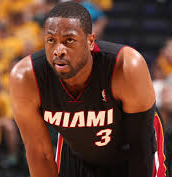 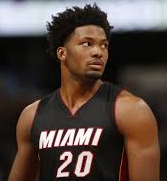 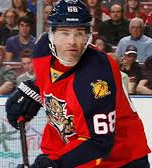 has never quite trusted youth. For the Cats it’s a blueprint taken to extremes, bookended by 44-year-old leading scorer Jaromir Jagr and by 10 players not even born when Jagr first entered the NHL, such as rising stars Sasha Barkov, 20, and Aaron Ekblad, 19. Both teams’ uncommonly wide gulf between its oldest and youngest players was reflected perfectly Monday in the Panthers’ dressing room following a midday practice. Nick Bjugstad, the Cats center, is 23 but looks even younger. His hand kept drifting absent-mindedly to his chin and rubbing what was there, which isn’t much. He is trying, the poor kid. The NHL postseason is upon us, the fight for the Stanley Cup beginning, and in hockey, the playoff beard is a near-sacred tradition. A wisp of blond whiskers trying bravely to be a goatee and an even wispier sprout on his alabaster cheeks is all Bjugstad can claim for now. "I keep playing with it – it’s more than I’ve ever had!' he is saying after Monday’s midday practice. "It is what it is. But it’s kind of embarrassing." Elsewhere around the dressing room manly playoff beards are in full bloom. It looks like a casting call for a movie about lumberjacks. A media guy trying to be kind tells Bjugstad most of the full-bearded guys probably started growing their facial hair at least a month ago. "So did I," Nick had to admit. The beard thing is the perfect reflection of what the Panthers see when they look in the mirror: A blend of age and youth, of over-35 veterans like Jagr, Roberto Luongo, Brian Campbell, Shawn Thornton and Willie Mitchell, offset by what is perhaps hockey’s premier core of players under 25. It was a risk that relies on aging players still having enough prime left and youthful guys proving ready. It was a chemistry experiment that has worked but might have blown up in the lab. "Our older guys have been so willing," as general manager Dale Tallon told me Monday. "It could have been a disaster." From the 45-minute jaunt from Sunrise down to Miami, from ice to hardwood, Heat veterans like Dwyane Wade, Udonis Haslem, Amar'e Stoudemire, Joe Johnson and (even sidelined) Chris Bosh similarly mentor a youthful core led by rookies Justise Winslow and Josh Richardson, by second-year man Tyler Johnson and by Hassan Whiteside, who is 26 but still learning. "I’m just passing down knowledge," Wade describes the role that doesn’t show up on stat sheets. "All of us are where we’re at because someone before us helped." It is a good time to be a fan of both teams, with each franchise locked in win-now mode but also boasting a blossoming young core that suggests a bridge to a promising future beyond the Hall of Fame-bound old guard led by Jagr and Wade. Both teams share justifiably high playoff hopes as the Panthers face the New York Islanders in the first round with Game 1 here Thursday night, while the Heat enter their final two regular-season games still unsure of their seeding, who’ll they’ll face or whether they’ll have home-court advantage. You’d think the Heat might be in happy-to-be-here mode, after missing the playoffs last year and with Bosh out. Yet there is the sense of a wide-open Eastern Conference, and of a real chance to reach the East finals, maybe head-to-head vs. old friend LeBron James’ Cleveland Cavaliers. You’d think the Panthers might really be in happy-to-be here mode. They last made the playoffs in 2012 and last won a playoff series in Year of the Rat 1996. Tallon and coach Gerard Gallant both admitted Monday they did not expect to win a division title this year. But hockey’s Eastern Conference also is wide open. An ESPN experts panel by a 9-0 vote picked the Panthers to advance past the Islanders. Washington was the only East team with an appreciably better record than Florida this season, but the Cats were 2-1 against the Capitals, outscoring them 10-5. The idea of a championship run by either the Panthers or especially the Heat is fanciful and not being discussed much in any sober conversation, but, in only their fifth playoffs at the same time, the idea of either team or both reaching their conference finals is tantalizingly plausible. And who knows? If that happens, by then, Nick Bjugstad’s patchwork of whiskers might even pass for a decent beard. 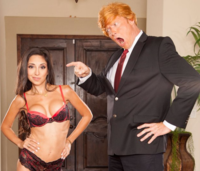