The Last 3: My three most recent columns, ICYMI or thought them so wonderful they deserved another look: Curious Pick, Major Gamble, the latest, on Dolphins making Laremy Tunsil their No. 1 draft pick last night. Heat Has Bigger Concerns Than #BringBoshBack, off Miami's damaging Game 5 home playoff loss. Keep It Simple, Dolphins: 2 Names, on what Fins should be thinking for their top draft pick.

SOUTH FLORIDA SPORTS' WILDEST 24 HOURS EVER?: I think we've just experienced Miami sports' most dramatic 24 hours ever in the stuff I hit on in this blogpost. I think I'd nominate the 24 hours from late Thursday night through late last night. We had the Marlins finish a road sweep of the Dodgers on a Giancarlo Stanton homer followed immediately by the 80-suspension of Dee Gordon. We had the Dolphins creating the most buzz in the entire NFL Draft first round in selecting tackle Laremy Tunsil despite that infamous gas-mask-bong video. And we had Dwyane Wade sinking two late 3's (a shot he'd last made in December) in a must-win that kept the Heat season alive. Wild ride. Thank you, again, sports.

G6: HEAT 97, CHARLOTTE 90: WADE'S LATE HEROICS LIFT MIAMI, FORCE GAME 7: Not yet. The Heat aren't done yet. There will be a Game 7 Sunday at 1 p.m. back in Miami after last night's 97-90 Miami win in Charlotte evened this first-round playoff series 3-3. Dwyane Wade led Miami with 23 points with 10 in the telling fourth quarter -- including two 3-point baskets. Wade had last hit a 3 in December. What wonderful late heroics by the Heat's all-time great. D-Wade took it upon himself to save this game, and series, and keep the season alive. ..... Original post: The Heat never have blown a 2-0 playoff series lead and lost. Thirteen times they have led 2-0 and 13 times

they have advanced. That historic franchise streak is at risk tonight in Charlotte with Miami trailing 3-2 and the Hornets a 2-point favorite. A Charlotte streak could end, too. The franchise last won a playoff series 14 years ago. That and the underdog role in this series has the Hornets playing with a "a huge chip on our shoulder," as

Kemba Walker put it. Miami is stunned to find itself in this predicament after winning the first two games at home by a combined 44 points, seemingly in control. Charlotte's defense has limited Miami to 38.6 percent shooting in the three games since. And the Heat's own defense has struggled stopping Hornets guards Walker and Jeremy Lin. Charlotte's 3-point shooting also came alive in the last game. Said Heat coach Erik Spoelstra: "Nobody said this was going to be easy. Nobody's giving out free tickets to the second round. You do have to earn it. It's our first real test when our backs are against the wall. These are the games you remember." Miami tonight will need more of the vintage Wade who scored 25 in Game 5, but Wade needs more help. Calling Goran Dragic and Hassan Whiteside, especially. Because only the season depends on it. It will end tonight for the Heat, or survive for a Game 7 on Sunday back in Miami.

AFTERSHOCK: LAREMY TUNSIL HAS DOLPHINS IN SPOTLIGHT: I don't step back from my column; click on Curious Pick, Major Gamble to read in full. Many in the national media are swooning over Miami's unexpected windfall. So are many Dolfans (see poll below). I'm more skeptical, acknowledging Ole Miss tackle Laremy Tunsil is a great talent but also admitting his off-

field issues and injury history make his Bust Potential bigger than most. Also, Miami has just spent its top pick on a tackle (not a position of urgent need) with plans to try to make him a guard. Hmm. He'll be the world's biggest, least-experienced guard. Weird. I haven't even gotten to the gas mask yet. Let's talk about the off-field baggage. The domestic assault charge (later dropped) against his stepfather, who is suing him. The seven-game NCAA suspension for accepting improper benefits. The admission he took cash from an Ole Miss coach. And of course the hacked Twitter account that last night exposed the image shown of Tunsil smoking pot through a gas-mask bong. A bleepin' GAS-MASK BONG! "Years ago," Tunsil said of the photo. Well, two years ago, it turns out. Somebody did Tunsil dirty with that hack job. I feel bad his big draft night was enveloped in controversy. But it is him in the photo. So, who is Miami getting here? The great talent who will eventually be Ryan Tannehill's blindside protector for many years? Or a guy who needs a gas-mask because he can't get enough smoke -- a guy whose risk may outweigh his potential? Even with those doubts I would give Miami high marks for the totality of their first round, because it must include cornerback Byron Maxwell and linebacker Kiko Alonso, who arrived from Philly when Miami first traded down from 8th to 13th. In effect, the Dolphins just got three starters in the first round. But! It also is fair to note Maxwell is coming off a terrible season, Alonso must reverse his decline since his excellent rookie season, and Tunsil arrives with character questions. So: If, if, if. If Maxwell bounces back and is starter-caliber. If Alonso shows the rookie we saw was no fluke. If Tunsil proves everybody wrong and is the steal of the draft. If all three happen Miami just had an A-plus first round. If.

And ... weird got weirder: Top Dolphins draft pick Laremy Tunsil could not attend his 3:30 introductory press conference yesterday because (it was said) he suffered an "allergic reaction" of undetermined origin at the team's Davie facility. Allergic to questions about gas masks, maybe, because he did speak about 70 minutes later, seemed fine, but would not address any controversies, saying he was there only "to talk about the Miami Dolphins."

And there's this...: ESPN's Adam Schefter reports the Ravens, picking 6th, passed on Tunsil because of that gas-mask-bong video. That's Baltimore, a smarter, better-drafting, more successful team than Miami in the past 15 years. I'm just sayin'. Something to mull over for you folks so critical of me for being too critical of Miami's 1R choice.

2nd round (38th overall) -- Xavien Howard, CB, Baylor: Smart position-need pick, 6-foot, 200 pounds, big, physical corner, good against the run, 9 interceptions past two seasons. Miami traded up 4 spots (giving up a 4th round pick) to select Howard, suggesting a lot of love and the hope he'll start as a rookie opposite Byron Maxwell.

3rd round (73rd overall) -- Kenyan Drake, RB, Alabama: Needed a running back. Got one. Would have preferred fellow 'Bama RB Derrick Henry, but he went 45th overall. Like that Miami targeted and hit on its two main position needs on Day 2.

3rd round (86th overall) -- Leonte Caroo, WR, Rutgers: Miami traded up into round for this added third rounder at large cost, giving up two Day 3 picks. Dolphins tried to trade up to select LB Myles Jack. I'm more interested in what they did do on Day 2. Trading up twice comes with a cost in lost Day 3 picks and reduced depth via rounds 3 through 7 today.

6th round (186th overall) -- Jakeem Grant, WR, Texas Tech. Traded up 10 spots to get him, givgin up one of three 7th-round picks to do so. That's four out of five picks so far designed to make Ryan Tannehill's life easier.

SAY IT AIN'T SO, DEE: BOMBSHELL ROCKS MARLINS: It was 1:17 a.m. in the East on Friday morning. The Marlins had just wo a fifth straight game by completing a four-game road sweep of the

L.A. Dodgers on a win by Jose Fernandez fueled by Giancarlo Stanton's seventh home run. The Fish were riding a season high. That's when the news broke that star second baseman Dee Gordon (pictured) had tested positive for testosterone and another PED and was suspended immediately for 80 games without pay by MLB. (Full story here). The gut reaction? "Him, of all people?" Second reaction: "If he's dirty, is anybody clean!?" This rocks the stereotype of PED use; this rocks the faith. Gordon is a waif of a man, the opposite of the power hitter looking for artificial muscles through illegal juice. Gordon also is the Good Guy personified, of the (formerly) perfect image, a great, smiling face of the franchise and of the too-few African Americans in baseball. A role model. All that. And all that takes a hit now as Gordon sits humiliated until after the all-star break, his earliest return set at July 29. Gordon called it an innocent mistake in a statement Friday, saying, in part: "Though I did not do so knowingly, I have been informed that test results showed I ingested something that contained prohibited substances. I made a mistake and I accept the consequences." Of course the shocker of a suspension has a pragmatic effect, too. Gordon is the reigning NL batting champion and stolen base leader. Though he was hitting only .266 so far this year, he's tough to replace. Derek Dietrich will be the likely new regular at second base. Who'll replace Gordon as leadoff hitter is dicier. With no great candidate it could be Martin Prado, who does not have classic leadoff speed but gets on base, a plus for that role. Meanwhile, what a bone-rattling disappointment! Say it ain't so, Dee. [Update: Dietrich at second, Ichiro leading off tonight at Milwaukee].

THE LIST: HURRICANES FIRST-ROUND DEFENSIVE BACKS: Of 61 Miami Hurricanes selected in the first round of the NFL Draft since the first in 1956, 13 have been defensive backs. The 13th happened last night with Artie Burns, who is pictured on the phone with the Steelers at his draft party held at The Betsy hotel on South Beach. UM's 13 1R DBs, in reverse chronology, with asterisks indicating players still active, and with NFL career grades at right my own relative to draft slot: 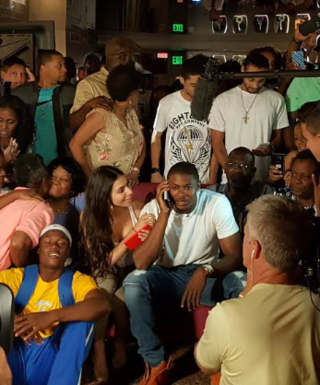 THE LIST: DOLPHINS FIRST-ROUND OFFENSIVE LINEMEN: The Dolphins have drafted an offensive lineman in the first round 11 times, the 11th last night. Miami's 11 1R OLs, in reverse chronology, with asterisks indicating active players, and with NFL career grades at right my own relative to draft slot: