Mario Williams to Dolphins?: The recently released Bills defensive end, 31, is visiting with the Dolphins today, as first reported by Ian Rapoport of NFL.com. The four-time Pro Bowl'er has 96 career sacks, though only five last season. Exploring Williams is smart, especially considering Miami may yet lose Olivier Vernon in free agency, which begins next week. Signing Williams would be costly, though, and not easy. Other potential suitors could include the Cowboys, Cardinals, Raiders, Giants and Eagles.

Mickelson: Golf's reinvigorated star: Click on The Rebirth of Phil Mickelson for our latest column from the World Golf Championships event at Doral. Mickelson is on leaderboard at 5-under, tied for seventh place entering Saturday play to continue a strong early 2016. At age 45 and with a new swing coach, he is determined to win again on the PGA Tour, which he last did in 2013. The sport is about Jordan Spieth, Rory McIlroy and the young guns now, but old favorite Mickelson ain't done yet.

REVISITING MY INFAMOUS "TRADE MARINO" COLUMN: That's the easiest way to recall what I wrote on Nov. 4, 1993 and how many folks remember it, although I put "trade Marino" in quotes here because the column did not make an unequivocal case that Miami should trade its veteran quarterback. My opinion was not quite as strong as the headline pictured conveyed -- I only wrote that it may be time to consider that then-blasphemous notion. The column, 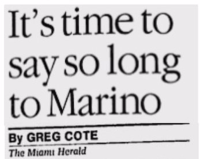 about which I still get occasional and mostly snarky emails and references, arose anew recently because a Twitter site called Freezing Cold Takes (@OldTakesExposed) cited the column. The Twitter site has made a cottage industry of holding media folks accountable for things written or said that have proved wrong, things that the writer (or sayer) surely now regrets. Two quick points: A) What I wrote seems even more legit now, in 20/20 retrospect, than it did at the time. B) I don't regret writing it; quite the opposite. More on both points in a second. First, a word about that Twitter site. It is a good idea. We media blowhards should be held accountable for what we put out there. It's also a weird idea, though. It's akin to political fact-checkers divining the truth of what candidates say in debates, only in the Silly Division. It's funny to me: A self-appointed Twitter Watchdog protecting society from the idea Stephen A. Smith (or I) might say something that proves ludicrous and get away with it. We're in the toy department, people. We're giving opinions (now doing business as hot takes) on sports, for God's sake. OK, back to what I wrote late in a Dolphins season over 22 years ago. That was a great column. Seriously. I don't say that often of my own work. It was great because it was intensely debated and remains memorable, and because it broached a taboo topic and made a case. It made news. Local TV stations interviewed me about it. The only thing I didn't like about it being a part of @OldTakesExposed is the implication the column is a dark secret I'd rather have kept hidden, or that it was a column I regret writing. Neither is true, or close to it. Marino, then 32 and out with an Achilles injury, was in his 11th Dolphin season still looking for that elusive Super Bowl ring. He would play six more seasons, and retire still ring-less. Great as Marino was, big as his stats were, Miami was not getting where it wanted to go with him and, at 32, he still had trade value. Maybe it was time to get a bounty for him and move on, that's all. What I wrote might have been stupendously mockable had Miami gone on to win a couple of Super Bowls late in his career. But the way it turned out, what Dolfan can honestly say the Fins might not have benefited from the change I wrote about? It was worth considering, which essentially is all I said. I'll never forget Marino's reaction the next day in the lockerroom. He was asked about the column because it had become news in a way, something requiring a response. So what did he think of what Cote wrote? "He may be right," Marino said. Twenty-two years later, you can still make fun of the column if you wish. You can still bring it up like something I'd rather you didn't and try to pin it on me like a regret. I'll wear it like a medal, thanks.

ON MY IMITATING HEAT BROADCASTER ERIC REID: This, like what's above, is sort of about me, but I wish to respond to the 790 The Ticket morning radio show slamming me the other day over my

"disrespectful" impersonation of Heat play-by-play broadcaster Eric Reid (pictured), which I do very, very occasionally (when asked) when guest-hosting on the Dan LeBatard Show With Stugotz. I LOL'd when I heard Zaslow's outrage replayed by LeBatard on Thursday, finding it doubly funny because I knew he wasn't kidding. Zas, who refers to himself as "a two-time Champion Broadcaster for the Miami Heat Radio Network," was defending his friend and colleague Reid, which is fine, but does a harmless impersonation really rise to a level meriting anger? Whatever happened to "imitation is the sincerest form of flattery"? Reid's face and voice are well-known in this market. He's a local legend of sorts, which is why he rises to the level of somebody someone might imitate in the first place. Eric has a distinct delivery and well-known catchphrases that make an audio caricature of him so inviting. He also is obsessed with providing statistics and arcane facts, which I find funny. ("That's Whiteside's third block tonight and 51st this month!") I consider my impression a compliment more than disrespect. In fact I respect Reid very much. Doesn't mean I can't have a little good-natured fun with him. Is it disrespectful when impressionist Frank Caliendo does his Jim Rome? Or when a caricature sketch artist exaggerates someone's features? I'm a Miami guy, on a fun-first radio show, mimicking the Heat's popular play-by-play man. That's all. It's benign frivolity. Save the outrage for something that matters.