1) It is SATURDAY, MARCH 19. Thoughts with the family of NFL player Tray Walker, born in Miami and died here, yesterday, at 23. R.I.P. 2) St. Patrick's Day. The only day of the year I force myself to stomach a token amount of cooked cabbage. 3) In The Previous Blogpost (ITPB): All March Madness: Haiku Challenge, who'll-win poll, my bracket, NCAA state-schools history & more. 4) Join us on Twitter @gregcote. Also on Facebook, Instagram, Vine, Periscope -- and now newly on Snapchat, too, @upsetbird2.

"If I could ask God one question it would be, 'Why?' Why was Dwyane Wade taking that 3-point shot to end that game!?" --Greg Cote

SUPER SATURDAY! MIAMI A LOUSY SPORTS TOWN? NOT TODAY, MY FRIEND. NOT TODAY: It's Super Saturday for SoFla sports. Here's why. Buckle up:

1. Hurricanes men beat Wichita State, advance in NCAAs: After coasting past Buffalo in the first round, Jim Larranaga's guys faced Wichita State this afternoon and, after seeing a 21-point lead frittered away, won, 65-57, in a South Region game in Providence R.I. Angel Rodriguez's 28 points on 9-for-11 shooting led the way. The Shockers were a No. 11 seed to Miami's No. 3 yet Wichita State was favored by two points. They shouldn't have been. Now UM moves onto the Sweet 16 and will next face the winner of Sunday's Villanova-Iowa game.

2. Heat host LeBron, Cavaliers: Costly home loss to Charlotte Thursday night has Miami in four-team fight for third place in East, which Miami dearly wants so it can avoid having to face Cleveland in the postseason prior to conference finals. LeBron James returning to Miami isn't by itself the visceral event it once was. Saturday's 7:30 tipoff here is important mostly for that jockeying for position in standings.

3. Panthers host Red Wings: Florida, back up to a 3-point division lead, hosts Detroit Saturday at 7 with only 11 games left in the regular season. Expect a playoff atmosphere, with the Wings holding precariously onto the eighth and final spot in the East right now. Rumor: Actor Kevin (Spacey in Space) Spacey shows up, drops the ceremonial puck.

4. UM women begin NCAA run: Katie Meier's No. 5-seeded Hurricanes open their NCAA Tournament run Saturday at 6:40 p.m. vs. the No. 12 South Dakota State Jackrabbits in the women's Lexington Region. I like South Dakota State's nickname a lot more than I like their chances against The U.

5. Marlins meet Tigers in Jupiter: Miami is just past the midpoint of spring training as it welcomes Detroit for a 1:05 first pitch Saturday. We know spring results don't matter, but, at 5-10 with five straight L's entering today's game, might be nice to build a bit of excitement heading into April. Aside to Marlins: Jose Fernandez should be the Opening Day starter. Duh, right?

I could also mention the Canes held their third spring football practice under new coach Mark Richt on Saturday morning on campus. I'd also add something about the Dolphins continuing their work in free agency, but the Dolphins tend to be depressing and this is supposed to be an upbeat item about good stuff happening in Miami sports.

WE HAVE A MARCH MADNESS HAIKU CHALLENGE WINNER!: We combed through 108 entries in our blog's 11th annual March Madness Haiku Challenge which closed at noon today, and were pleased to find that 96 of them were valid entries -- exactly 17 syllables and on-point with the topic. Congratulations to reader John Flannery (pictured right), our 2016 champion. His happened to be one of the last entries submitted. Turns out John lives in Pennsylvania but we'll be able to fulfill his prize request: a Greg's Lobos T-shirt!

No one has a clue"

The judges (meaning me) appreciated the classic 5-7-5 phrasing, the simplicity, and the undeniable truth of it. Our four honorable mentions: Bernstock--"It's not a cash cow / They must say, its for the kids / as 'they' eat lobster" ... Brett Alger--"Talk about balls and busting / Cinderella's in search of better seed." ... Travis Ford--"When my bracket busts / I'll stop drinking and go home / I'm taking my ball." ... and Kjdesouza007--"Twelve again beats Five / My Final Four Picks Alive / What is TRUtv." Thanks also to readers Scott Anderson, Daniel Angster, Chet Cienkowski, Fryer54, Phil Shore and others who played.

COTE ADVANCES IN NCAA-STYLED MIAMI MEDIA BRACKET: SliceMiami.com is running an NCAA-styled Miami Sports Bracket in four 16-person categories or "regions." One is Media, and I advanced 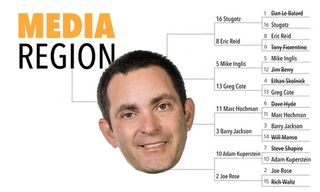 to the second round this week by beating fellow Heraldite Ethan Skolnick, 59.53 percent to 40.47. I am honored by the 19-point landslide. Also, I am frankly embarrassed that I give a crap. But it's fun (because I won, it's fun). Ethan and I enjoyed going back and forth on Twitter and Facebook, fake-campaigning. I think my voters were surprised, inspired and girded loins en masse by the fact I was the much lower seed, strongly suggesting the folks running the poll were drunk at the time of the seedings. I had the toughest first-round matchup in the formidable Skolnick. I don't include Stugotz facing No. 1-seeded Dan LeBatard, since the love-to-hate-Dan tenor of their 790 The Ticket/ESPN Radio show made it obvious Stugotz would win. Other first-round Media winners: Eric Reid over Tony Fiorentino in a duel of Heat TV broadcasters; Heat radio guy Mike Inglis over TV's Jim Berry; WQAM's Marc Hochman over the Sun-Sentinel's Dave Hyde; the Herald's Barry Jackson over TV's Will Manso; Adam Kuperstein over fellow TV talking head Steve Shapiro; and WQAM's Joe Rose over Marlins broadcaster Rich Waltz. Pictured right are the upcoming second-round matchups, featuring the disembodied head of an exalting Stugotz. Click on the image to expand. I'll let you know when 2R voting begins.

Poll result: "Other," Kansas favorites to win NCAAs: We asked you who'd win the men's NCAA Tournament and the nine choices we offered all were either betting favorites or top-two seeds. So Miami was not included ... which may explain the category "someone else" winning our vote with 26.7 percent, followed by Kansas at 20.0%, North Carolina 17.3%, Michigan State 12.0% and Kentucky 10.7%.